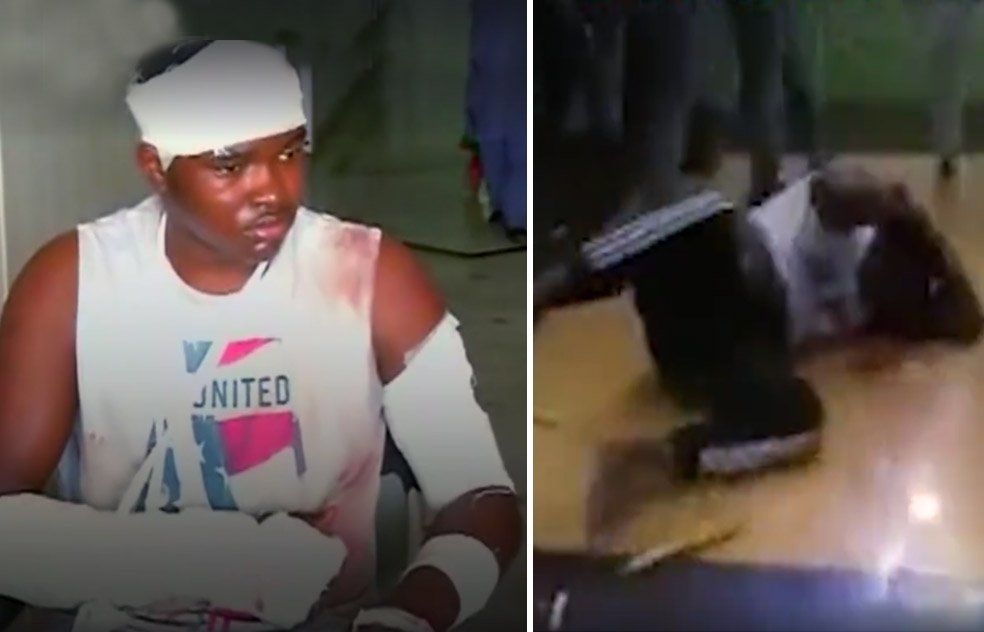 Update/Correction – The text ‘Three days later, a Kenyan woman was dragged out of her car, slapped and beaten in the abdomen’ has been removed from the article as it came to our notice that the Kenyan woman’s complaint of assault in Greater Noida on 29 March was fabricated. We aplogise for the mistake.

On 25 March 2017, an Indian student in greater Noida allegedly died of a heart attack caused by drug overdose. Locals accused African students living in area of having deliberately drugged him, following which the police arrested and detained five Nigerians.

The next day, hundreds of African students protested outside the local police station for what they believed to be ‘discriminatory arrest’. Eventually, the police were forced to release the five Nigerians due to lack of proof or witnesses.

This move greatly angered people in the Indian community. A protest organised as a homage to the death of the Indian student, turned into an anti-African march.

On March 26, two Nigerians were attacked in Ansa Plaza Mall, Greater Noida by a gang of men. In a Facebook post, the Association of African Students in India advised its members to stay indoors and not attend lectures for fear of possible attacks.

Posted by Association of African Students in India on Tuesday, March 28, 2017

Attacks against Africans in India is nothing new. Not even a year has passed since a 29-year old Congolese man was assaulted and battered to death by three men following an argument over hiring an auto-rickshaw in Delhi. A few months later, a 21-year old Tanzanian girl was repeatedly beaten and forced to strip naked in Bangalore as the local police stood by and watched.

External Affairs Minister Sushma Swaraj asserted in the Parliament that before the inquiry is completed, people should refrain from saying that the attack on Nigerians in Noida mall is driven by racial discrimination.

African diplomats in India issued a joint statement expressing their displeasure with Delhi not sufficiently condoning the “xenophobic and racist” attacks on Africans. In response to this, the External Affairs Minister said, “It is wrong to say racial attack since this was done by an angry mob…Indians have also died in African nations, we didn’t allege racist attacks?”

Firstly, let us call the attack what it really was – Racial Violence.

Only when we acknowledge that racism against Africans in India is a long-standing issue, a solution will be found. Simply calling the attacks “unacceptable crimes” is an attempt to belittle the atrocities and dodge responsibility for what they truly mean.

When foreign nationals are attacked in the host country, the perpetrators of the crime cannot be the deciding voices on what construes as racism. The Indian government’s unwillingness to accept that the country has a problem of racism gives the attackers a sense of impunity.

Former BJP MP Tarun Vijay plainly denied the assault in an Al Jazeera interview, rubbishing the claims that India is a racist nation.

“If we were racist, why would we have the entire south (India)? Why do we live with them (if we are racists)? We have black people all around us.”

The ridiculousness of this statement is painfully laughable.

Using diversity of skin tone as a way to deny India’s racism problem is akin to saying that a country is not sexist because it has women.

It’s high time that the Indian government accepts responsibility for the country’s flaws and salvages the relationship we share with Africa. As former colonies, both nations have fought against racism and have been closely linked to each other through trade. Stereotyping Africans as “drug peddlers” is a shortsighted statement which dampens Africa’s estimate of India. Both nations have maintained friendly ties, with Africa looking up to India for its anti-colonial movements.

However, it doesn’t take long for perceptions to change. Within a short span, Donald Trump has changed the world’s perception of the United States, even though, only a portion of the American population is racist and xenophobic. Similarly, only a section of the Indian society condones such racism, therefore, it’s essential that the Indian government punishes them before it’s too late.

Posted by Association of African Students in India on Tuesday, April 4, 2017

With enough proof to establish the problem of racism in the country, The Logical Indian urges the Indian government to accept its existence, for the benefit of national interest and to sustain diplomatic ties with Africa.