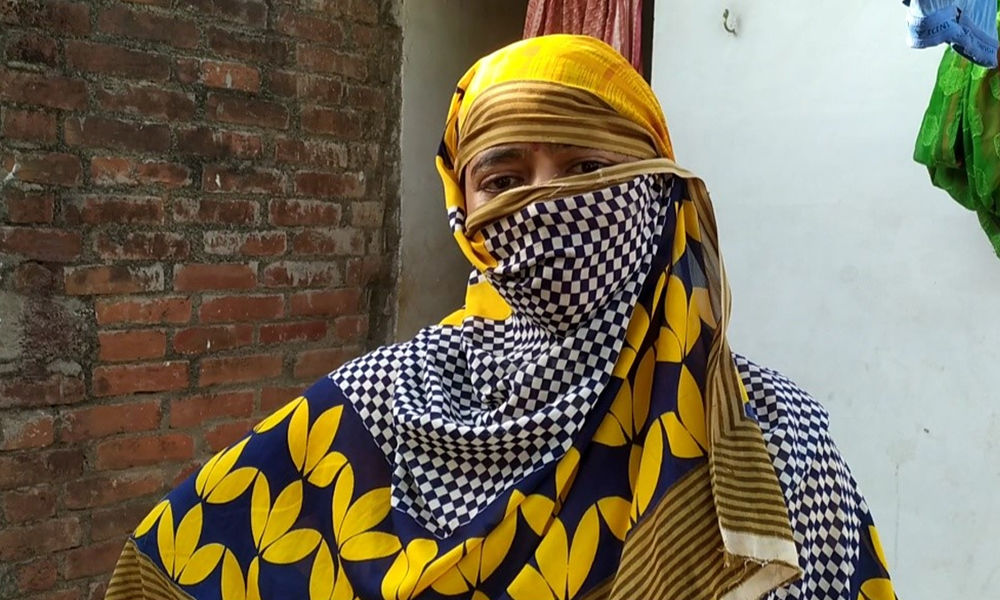 "...So That We Can Live In Peace": 24-Year-Old Domestic Violence Survivor From UP Is Counting Days Of Lockdown

Jigyasa Mishra is an Independent Journalist who primarily reports on rural issues, art and culture from different parts of India.

Women are increasingly facing domestic violence and sexual abuse since the lockdown came to force. The cases increased even more rapidly after the liquor stores were opened.

Daily wage woman workers who earlier would take care of their children and themselves are now falling prey to domestic violence amid lockdown.

Gulabsa Khatoon (name changed) is counting days till the lockdown gets over. Not a day goes by when her husband won't abuse her or their children. He even beats her when asked not to drink much.

"Now he stays home. Earlier when he used to work at the factory, he would return home in the night drunk. There wasn't much issue then as he would just come home tired and sleep. I wish he gets back to work immediately so that we can live at peace," Gulabsa says, ensuring his husband doesn't see her complaining.

Gulabsa is a 24-year-old domestic help and a mother of two already. Married at the age of 19, she discovered her husband was an alcoholic only later. She lives with her family in Kalyanpur block of district Kanpur in Uttar Pradesh.

"As soon as the national lockdown was announced in March, the number of domestic violence cases, according to the calls at helpline reduced for about a week. Then it gradually started increasing and right from the day of the opening of liquor shops we observed a hike in complaint calls," said Additional Director General of Police-112 helpline Uttar Pradesh, Aseem Arun.

Gulabsa says that she thought things would change for her that's why she started working as a domestic help in a nearby colony. Barely two kilometres from her house. "I thought that I need to start earning even a little money to ensure my children eat every day and we don't depend on this alcoholic. But now I am back to that situation," she added.

According to the National Family Health Survey (2015-16), one-third of women said they had experienced domestic violence but less than 1 per cent of them approached the police for help.

Non-government organisations' work not counted as essential service, it is becoming a challenge for many NGOs to monitor such cases and take actions on a broader level. "Now this is the time while most of the domestic violence accused are at home with family members who even support them. Automatically this becomes an alarming situation for the victims. We're trying to aware people to stand by each other if they come to know about anyone facing such problem via social media since even we are not allowed to do much movement during this pandemic," says Krati Prakash, UP State Head, Breakthrough.

A woman from a village in Lucknow district, on request of anonymity, shared her traumatic experience when she went to buy salt from a general store. the shopkeeper asked her to do objectionable things. "I can not complain to the police. I want to feed my children," she says.

She hails from a below poverty line family and has no source of income right now. A widowed mother of three children, ageing ten, eight and four, respectively she feels helpless to survive the lockdown.

On asked if she tried filing a complaint in nearest police station she said, "I did once but was asked to sort it out at home as they (cops) are busy with many other issues of lockdown right now."

According to 112 helplines, the number of calls related to sexual abuse has increased amid lockdown. However, every caller says not to call back for they have to hide before calling the helpline. With families supporting abuse at home, the challenge has increased for such women and girls.

"There's always a misconception about the term 'domestic violence'. Most of the times, people think it must be the husband abusing or assaulting wife. But there's more to it. Majority of calls that we get on the helpline are from elderly being victim of domestic violence. In fact, child abuse is another form of it," said ADG Aseem Arun.

On May 17, India completes its third phase of lockdown, with doubts of it being extended even more. For many such women like Gulabsa, it is not a mere government order but extending torture in the form of national lockdown.