Could Have Won Gold If Delhi Govt Supported Us: Asian Games Bronze Medalist 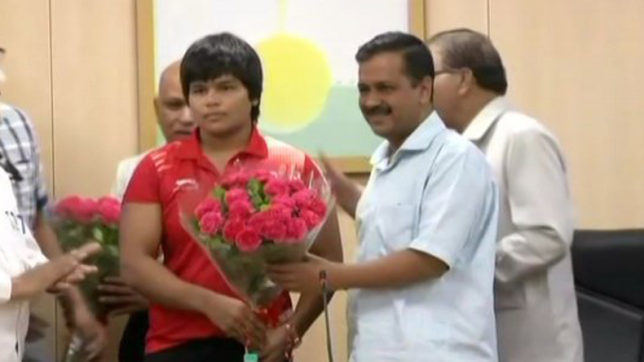 Asian Games bronze medalist Divya Kakran has accused the Arvind Kejriwal-led Delhi government of not providing her with any help while she prepared to represent India in the wrestling competition.

During a felicitation ceremony held in Delhi, Divya Kakran lashed out at Kejriwal in front of government officials and other medalists. “I’d won a medal at the Commonwealth Games (in Gold Coast, Australia, earlier this year) and you had told me that I would receive more help going forward. But not even my phone calls were answered,” she said, according to DNA reports. She added that instead of felicitating the winners if the government had provided enough support at the right time, she and other athletes would have won gold. She added, “You’re felicitating us today but please also think of poor kids aspiring to become athletes. You’ve gathered us today to congratulate us, but there’s no support provided when we need it most.”

The wrestling champion hails from a low-income family in Delhi’s Gokulpur. Divya’s father is supporting her dreams by selling “langots” — and reportedly, was even selling outside the stadium while she won the national competition. The 20-year-old told ABP news that while preparing for Asian games, she had continually requested for help from the state government but to no avail. She felt dejected as her written appeal was ignored. She added, “When I was preparing for the Asian Games, we had approached Delhi Chief Minister Arvind Kejriwal for help, I told him about my torrid financial condition they even assured me of help but to no avail. Till date, I haven’t received any support from the Delhi government.”

When she didn’t receive any help from the Delhi government, she competed for the Uttar Pradesh state team, where she qualified for Asian games 2018. “At times I didn’t even have enough glucose to quench my thirst after practice, but I had the determination to do something and big so I would drink water and get back on the mat,” she added during her interview with ABP news. Divya Kakran made her country proud by winning the bronze medal in the freestyle 69 kg event in women’s wrestling by defeating Chinese Taipei’s Chen Wenling.

While Prime Minister Narendra Modi and actors like Anil Kapoor have congratulated Ms Kakran on her win, Uttar Pradesh government has announced a cash prize of Rs 20 lakhs for the athlete in recognition for her achievement.

Kejriwal was quick to defend his administration saying whatever policies they have drafted in support of the athletes were faced with obstacles, and shunted for one reason or another by higher officials. He said that not just Divya, but many other athletes had come to him seeking help, but met with the same fate. “The felicitation we’re doing today is only because of the Supreme Court’s recent judgement,” he added.

Young athletes coming forward and saying exactly what needs to be said is a change in the right direction. The government needs to be held responsible for this not supporting athletes while they are developing. For decades, Indian athletes are not getting the proper support they deserve, like their international counterparts. It is high time the government realises that with a bit of help our athletes can make India shine even brighter.