The declarations under the Black Money act surprised many including the Government. At the end of the 90 day compliance period, only 638 declarations were made totaling an amount of 4147 crore rupees. This would result in 2488 crore rupees of tax revenue to the government. This amount was compared to a similar scheme (Voluntary Disclosure of Income Scheme) in 1997 where a much larger amount was declared.

There was considerable disappointment when the Government announced the Declarations received and amount declared under the compliance window under ‘The Black Money (Undisclosed Foreign Income and Assets) and Imposition of Tax Act, 2015’. According to the government, a total of 638 declarations have been received under the compliance window declaring undisclosed foreign assets amounting to Rs 3770 crore. This amount was later revised to Rs 4147 crore, while the number of declarations remained the same. The compliance window opened on 1st July, 2015 and was open till 30th of September 2015. For the declarations made, Tax at the rate of 30 percent and penalty at the rate of 30 percent is to be paid by 31st December 2015.

Many tax experts compared the current initiative with the Voluntary Disclosure of Income Scheme of 1997, an idea of then finance minister, P Chidambaram. In his Budget speech of 1997-98, the then Finance Minister in the United Front Government, P Chidambaram remarked that in a country of 90 crore people, it was absurd that only 1.2 crore people are assessed to income tax and that only 12000 of the assesses are in the tax bracket of income of above Rs 10 lakhs.

In this budget speech, he said that it was time to think of a scheme to harness 'black money’ for productive purposes. He also believed that the time opportune to introduce a Voluntary Disclosure Scheme. The scheme was supposed to be very simple that irrespective of the year or the nature or the source of the funds, the amount disclosed, either as cash, securities or assets, whether held in India or abroad, would be charged at the revised highest rate of tax. Apart from these, Interest and penalty will be waived. Immunity shall also be granted from any action under the Income-tax, Wealth tax and the Foreign Exchange Regulation Acts.

Another feature of this scheme was that 77.5% of the funds collected through the scheme will be accrued to the State governments. This was seen as a step to seek active co-operation of the state governments.

The scheme was introduced in 1997 and the compliance period was 6 months. The tax payable on the declared amount was at the rate of 35% in the case of companies and firms and 30% in the case of others.

By the end of the scheme period, a total of 33,339 crore rupees was declared by 4,75,133 declarants. This resulted in a collection of 9584 crore rupees in taxes by the government. The highest amount was collected in Mumbai (2032 crore), followed by Delhi (1228 crore) & Ahmedabad (968 crore). As promised, 7594 crore rupees were transferred to the states. 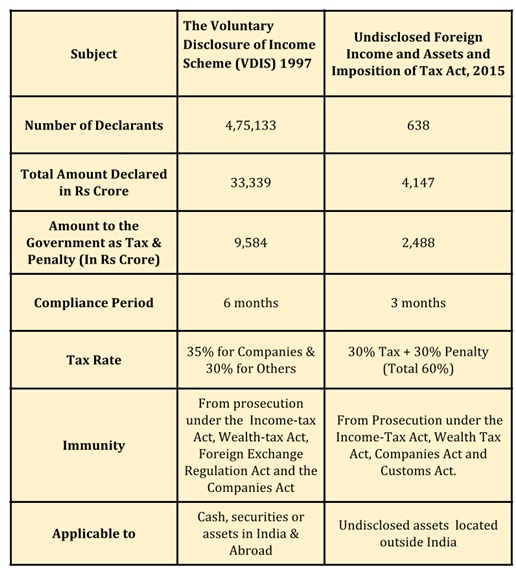 Why not another VDIS?

There are multiple reasons given by tax experts for the failure of the current scheme, the major one being the higher tax rate. The 1997 scheme was successful because of a lower tax rate of 30%, which was not very different from the normal tax rate. Even the rigorous imprisonment clause of three to ten years for willful attempt to evade tax did not help.

Another issue that went against the current NDA government is the affidavit filed by the previous Governments that there won’t be another amnesty scheme like the VDIS. The previous governments had to file this affidavit in response to a PIL filed by a private citizen in the Supreme Court that such schemes discourage honest tax payers and are unfair to them.