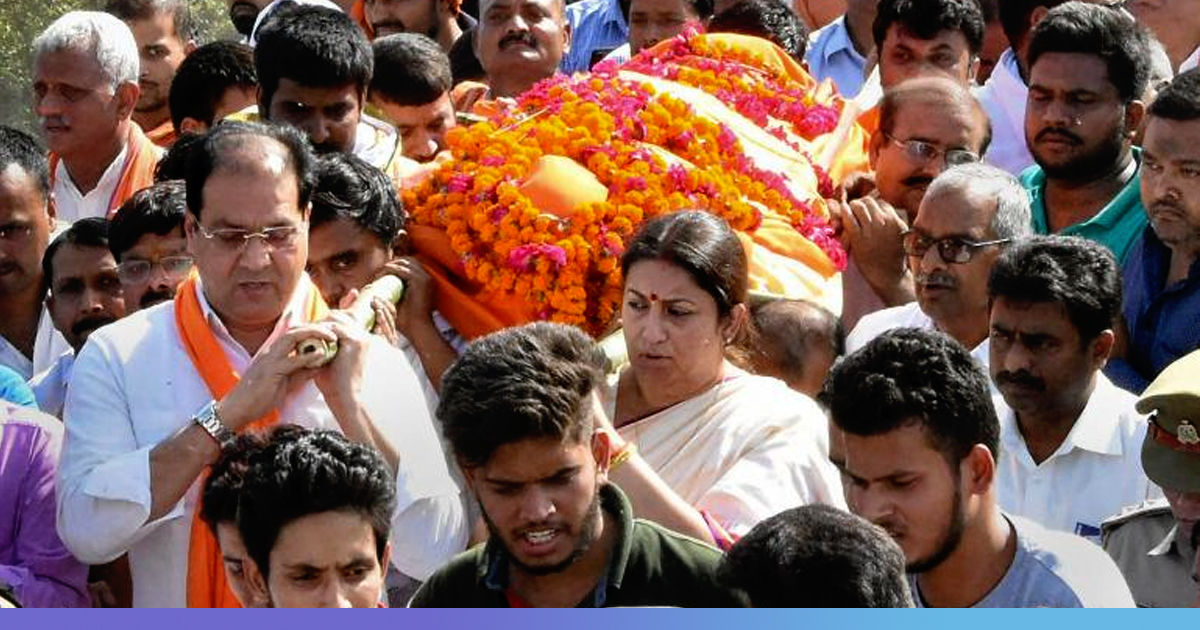 The video of Smriti Irani being a pallbearer for her close aide, who was shot dead in Uttar Pradesh’s Amethi on May 25, has a very strong message. The video of her carrying the mortal remains of Surendra Singh that went viral over various social media platforms has won hearts as it became a symbol of Women Empowerment.

The newly elected Member of the Parliament, by lending “shoulder” to the mortal remains of her close aide broke one too many conventions with a single act. The women in this country are not allowed to grieve properly for the loss of their loved ones and are restricted from being part of many customs.

Irani, after being informed about the death of her close aide rushed to Amethi from Delhi. She was accompanied by BJP Leader and State Minister, Mohsin Raza, when she walked over a kilometer to the cremation ground. The newly-elected MP said that she will ensure that Singh’s culprits get death penalty, “I’ve taken an oath before Surendra Singh ji’s family, the one who fired & the one who ordered it…even if I have to go SC to get the culprits a death sentence, we will knock the doors of the court,” she said.

Fifty-year-old Surendra Singh, ex-sarpanch of Baraulia village, played an active role in swinging votes from the grassroot level in the favour of BJP. He was shot dead two days after the Election results. Surendra Singh worked closely with BJP Leader Smriti Irani and played an instrumental role in Smriti Irani’s emphatic victory over Congress Supremo Rahul Gandhi in Amethi.

What are the police saying?

As of now the cops have arrested Dharmnath Gupta, Wasim and Ramchandra on suspicion and are interrogating Nasim and Golu. All of them were picked up by the cops on the basis of a complaint lodged by Surendra’s family.

The local Policemen said that Surendra Singh was shot dead by four unidentified men. They barged into his residence and shot him dead at around 11:30 PM. Additional Superintendent of Police, Daya Ram stated that “Surendra Singh, 50, former Pradhan of Baraulia village, situated at a distance of 25 KM from Amethi District Headquarters, was shot dead at around 11:30 PM on Saturday.” He was rushed to a Lucknow Hospital on May 26 but later succumbed to death during treatment.

DGP, Om Prakash Singh has said that a total of seven alleges have been taken into custody and are being interrogated. The Chief of police hinted at old enmity being a possible reason behind the crime.

“We have come to know about an old enmity. We are also finding out if there was any political enmity. In the initial investigation, we have got some vital clues,” Om Prakash Singh, the chief of the state police was quoted as saying by news agency PTI.

Singh’s son, asserted that his father was a close aide of Irani and had campaigned for her throughout the Lok Sabha poll campaign. “After she became MP, Vijay yatra [victory procession] was carried out,” he added. “I think some Congress supporters did not like it. We have suspicions about some people.”

Rajesh Agrahari, the BJP’s convenor of the Amethi Lok Sabha seat called for a high-level inquiry, as quoted by PTI. “Considering the fact that the Congress is disappointed, especially after the defeat of its party president in Amethi, a high-level probe should be ordered, and the guilty should be punished,” he said.