Activists In House Arrest: Before BJP, Congress Did The Same To Curb Dissent 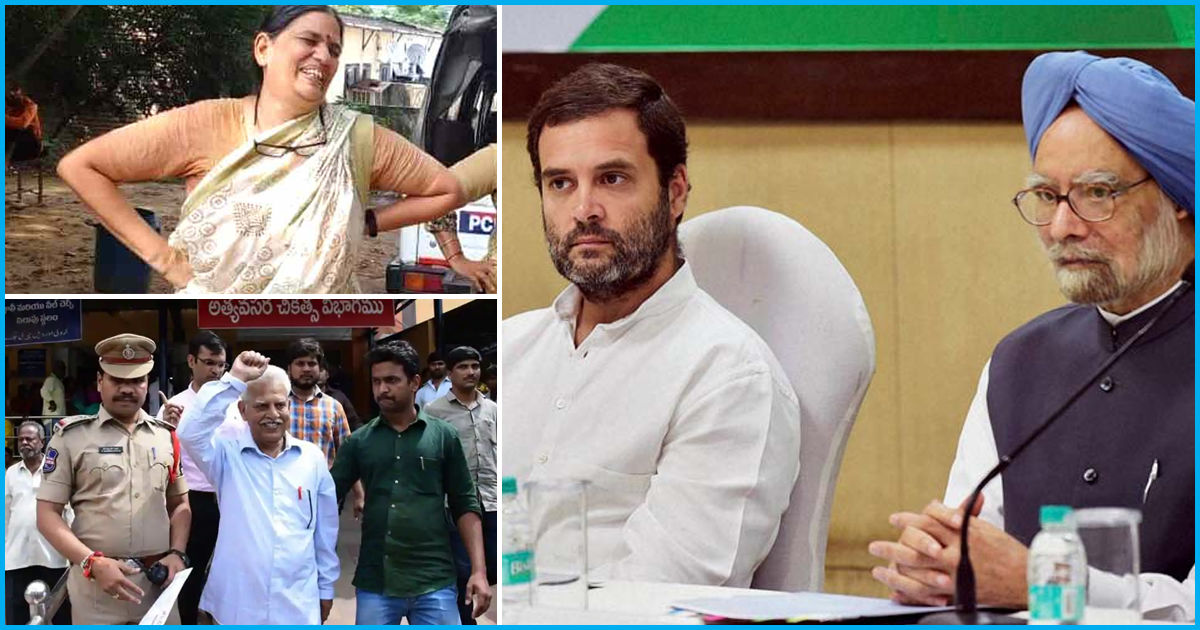 On Wednesday, the Supreme Court ordered the Pune police to place the activists under house arrest, in their own homes till September 6. While the arrested people are being termed as “Urban Naxals” by some, many others have condemned the move and have called it a “virtual declaration of Emergency.” At the time when BJP government is drawing strong condemnation from the opposition, some are raising questions about Congress being hypocrites.

“Dissent is the safety valve of democracy”

A three-judge Bench headed by Chief Justice of India (CJI) Dipak Misra, lashed out at the “coordinated arrests” by the police. The bench while observing that democracy could not survive without dissenting voices, said “Dissent is the safety valve of democracy. If dissent is not allowed, democracy will burst under pressure.”

Taking suo moto cognisance of the matter, the National Human Rights Commission (NHRC) has also issued a notice to the Maharashtra chief secretary and director general of police for the arrest of the activists. The NHRC said that media reports have pointed out that the arrests were not made after following proper protocols “which may amount to the violation of their human rights”.

Taking a dig at the arrest, many activists and politicians have spoken out. Congress President Rahul Gandhi also commented on the issue by saying, India has a place for only one NGO – the RSS.

There is only place for one NGO in India and it's called the RSS. Shut down all other NGOs. Jail all activists and shoot those that complain.

Welcome to the new India. #BhimaKoregaon

However, the Congress president’s condemnation acted as an insult to the injuries for the UPA-led Congress party. Twitteratis were quick to point out that UPA didn’t have an excellent record when it came to upholding fundamental values like freedom of speech and expression and some of the activists arrested now, were also arrested under Congress regime.

As Prime Minister Dr Manmohan Singh had declared that Maoists are No.1 threat to India's internal security. Now the Congress president openly supports the front organisations & sympathisers of the
Maoists.
Keep national security above politics

You Sir, set up and perfected the infrastructure being used for these arrests. Just so we remember that. https://t.co/wozkh0Pp2T

This is absolutely true. It was P Chidambaram who as Home Minister energetically oversaw the persecution of activists and social workers in adivasi areas: https://t.co/tbTH8tjSLP

As a reporter who has extensively reported on Maoists, find no difference in how UPA and current regime has dealt with activists working around the movement. Remember Binayak Sen? Arun Ferreira, Vernon G. arrested in 2007. So by all means call it Emergency, but not 2.0 but 3.0.

Here is a timeline of how the Congress government similarly manhandled these activities by using arbitrary charges.

According to the Hindustan Times, the residence of Left-wing activist and poet Varavara Rao was raided in Hyderabad. Rao has been writing poetry since 1957. He is the founder member of Virasam (Revolutionary Writers’ Association), who was arrested in October 1973 (UPA in power) under the Maintenance of Internal Security Act (MISA).

Rao was arrested on more than one occasions between 1975 and 1986 in different cases, including the 1986 Ramnagar conspiracy case. In 2003 the Metropolitan Sessions Judge, Hyderabad, acquitted him after 17 years.

Mumbai based activist, Ferreira was arrested from his residence. The authorities claimed that Ferreira was the leader of the propaganda and communications wing of the banned Communist Party of India (Maoist) in 2007. Branded the “Bandra Naxalite” by the press, he was slapped with ten cases relating to acts of terrorism. He spent four years and eight months in Nagpur Central Jail, but in January 2011, he was acquitted in the all of those cases. The state had not been able to prove even one of its charges against him. Author of, Colours of the Cage: A Prison Memoir published the same year, he, recounted the horrific details of his imprisonment.

A gold medallist from Mumbai University and a former lecturer at Ruparel College and HR College, Vernon was also arrested from Mumbai. In 2007, he was arrested on charges of being a Naxal operative. The police claimed that the NGO he worked for is a “covert Naxalite activity place”. At least, 20 cases were filed against him under the Unlawful Activities Prevention Act and the Arms Act. He was also charged with sedition. In 2011, he was acquitted in all the cases due to lack of evidence. He served six years in jail.

“There was a time in my life when I thought it would be impossible to get out of jail, and yet, here I am, a degree in my hand and responsibility on my shoulder,” said Vernon while speaking to Mumbai Mirror in 2016.

Gautam residence in Delhi was raided, and his arrest was made. Gautam, a Delhi-based journalist, has been associated with People’s Union for Democratic Rights. He is also an editorial consultant of the Economic and Political Weekly. Navlakha, a frequent traveller to Kashmir Valley for the last two decades, has written extensively about human rights violations in Jammu and Kashmir.

In May 2011, Gautam was denied entry into Kashmir at Srinagar airport by state police. The police denied his entry saying, “his presence could disturb peace and order in the Valley,” NDTV reported. While speaking to India Today, Gautam said, “I want to know why I have been denied entry into a state where I have travelled freely for the past 22 years.” In an interview on ‘Freedom, Justice and Resistance in Kashmir’ to Indian Writers Forum, he explained the need to keep on asking questions against injustice. He explained that the government (Congress) is trying to silence him and the people who want to tell the truth about Kashmir.

He, along with Sudha Bharadwaj has also demanded to repeal the Unlawful Activities (Prevention) Act, 1967. They stated that the Act passed to regulate the activities of criminal organisations, has been used by the government to curb extremist activities as opposed to unlawful activities, reports Hindustan Times.

The Times of India reported the ministry of home affairs, defending the raids and the subsequent five arrest said that in December 2012, the UPA government had come out with a report in which they identified 128 organisation having links with or acting as fronts for CPI (Maoists) and had recommended action against these organisations.

Seven out of 10 activists whose houses were raided- Varavara Rao, Sudha Bhardwaj, Surendra Gadling, Rona Wilson, Arun Ferreira, Veron Gonzalves and Mahesh Raut belongs to the organisations having links with or acting as fronts for CPI (Maoist).

These raids were carried out as part of a probe into the violence between Dalits and upper caste Peshwas at Koregaon-Bhima village near Pune after an event called Elgar Parishad on December 31 last year.