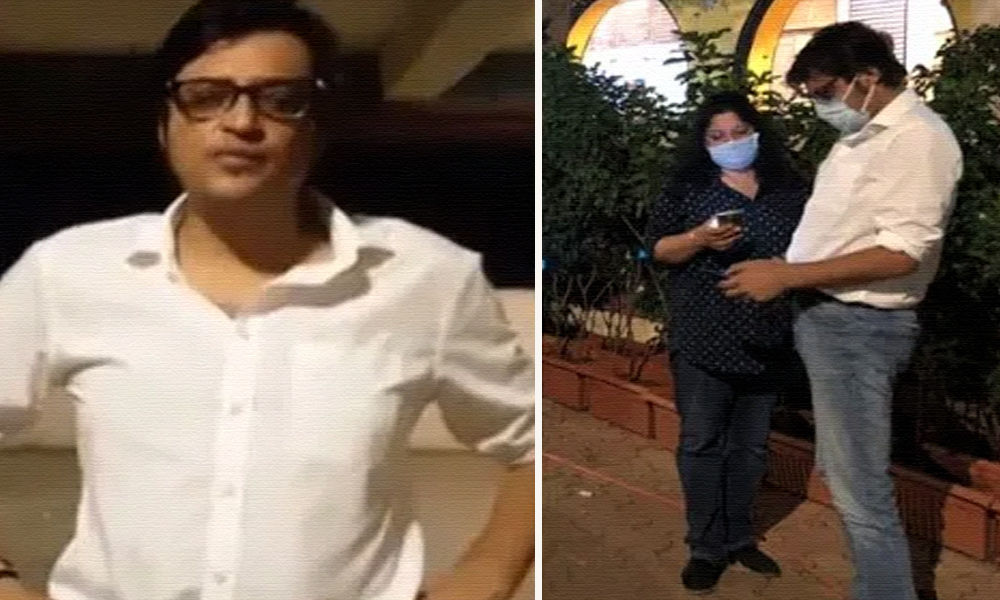 An FIR was filed at the NM Joshi Marg Police Station under various sections of the IPC against the attack.

Mumbai Police on the morning of April 23 arrested two people in connection with an alleged attack on Republic TV's Editor-in-Chief Arnab Goswami and his wife.

Reportedly, the police have informed that an FIR was filed at the NM Joshi Marg Police Station under Indian Penal Code Sections 341 (punishment for wrongful restraint) and 504 (intentional insult with intent to provoke breach of peace).

#UPDATE 2 people arrested in connection with the attack on Arnab Goswami & his wife. FIR registered by NM Joshi Marg Police station under sec 341 (Punishment for wrongful restraint) and 504 (Intentional insult with intent to provoke breach of the peace) of IPC: DCP Zone 3 #Mumbai https://t.co/zBarBKk4m6

The Republic TV chief and his wife were allegedly attacked past midnight, around 12:15 am, on April 22 by two unidentified individuals on their way back home from their studios according to the complaint filed by the television journalist. Goswami and his wife were unhurt in the attack.

"Two men on a motorcycle overtook my car and tried to identify who was driving. They then blocked the path of my car with their two-wheeler. The pillion rider hit the right side driver window several times and after realising that the car windows were up, the pillion rider removed a liquid bottle from his pocket and threw liquid on the driver's side of the car where I was sitting," Goswami said in his complaint.

"They had tailed me and they were given information by higher-ups to attack me," Goswami said. "I want to tell you, Sonia Gandhi, you are the biggest coward in the country right now. You have no guts to face me...I will hold you personally responsible for any consequences of any attack on me. If anything were to happen to me, it is Sonia Gandhi who is responsible," he said.

He added that the Vadra family would also be held responsible and also mentioned a tweet by party leader Alka Lamba "just three hours after the attack".

Written complaint submitted to police by Republic TV editor-in-chief Arnab Goswami, after he and his wife were attacked early this morning in Mumbai by 2 unknown persons while they were driving home from their studios. pic.twitter.com/wTU1Dau1lC

Congress leaders had earlier lodged complaints at various places against Goswami for communalising the lynching of three persons in Maharashtra's Palghar.

"It is an attempt to give religious colour to the incident by the media. Goswami is one of them. We have decided to request the CM to take action against him," said Congress leader Nitin Raut who has lodged a complaint against him in Nagpur on April 22.

An FIR was also registered against Goswami in Chhattisgarh's Raipur after several complaints by Congress workers.

Condemning the attack Union minister Prakash Javadekar said, "This is against democracy and it is really ironical that those who preach tolerance have become so intolerant. Therefore we condemn this attempt." He further called for action on the complaint.

We condemn the attempt to attack Arnab Goswami. We condemn every attack on any journalist. This is against democracy and it is really ironical that those who preach tolerance have become so intolerant. Therefore we condemn this attempt: Information and Broadcasting Minister pic.twitter.com/enblQjHC7P

"Sad to see such public hounding of a journalist for his freedom of speech. Congress shows it is the party that brought Emergency and continues its rich tradition of trampling free speech," BJP president JP Nadda said and called the incident shocking.