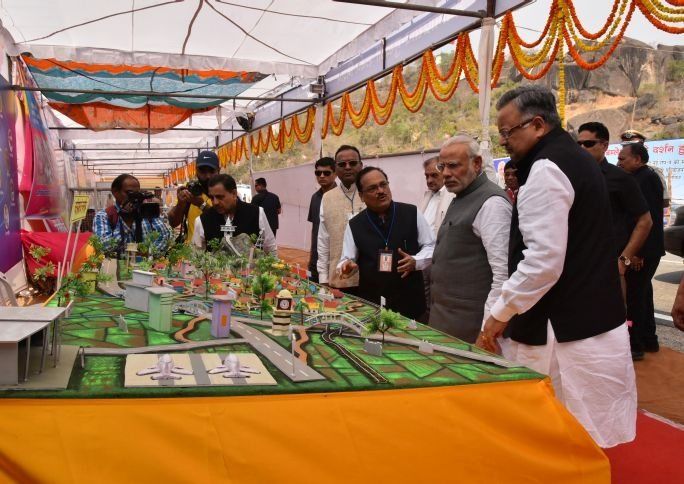 All You Need To Know About National Rurban Mission

National Rurban Mission
Prime Minister Narendra Modi launched the SP Mukharjee National Rurban Mission (SPM NRM) on February 21, from Kurubhat in Rajnandgaon district of Chhattisgarh. The National Rurban Mission aims to spur social, economic and infrastructure development in rural areas by developing a cluster of 300 Smart Villages over the next 3 years across the country. PM referred to rurbans as territories ‘with soul of village and facilities of city’. SPMRM was announced in the Union Budget 2014-15.

What is ‘Rurban’?
The word ‘rurban’ (rural+urban) refers to an area which possesses the economic characteristics and lifestyles of an urban area while retaining its essential rural area features.

After India gained its independence, despite of a plethora of welfare schemes and activities aimed at rural areas in successive five year plans, a skewed development model increasing the disparities between the rural and the urban areas has proliferated. Lack of livelihood opportunities, modern amenities and services for decent living in rural areas led to migration of people to urban areas. There are wide gaps in the availability of physical and social infrastructure between rural and urban areas.

No nation can grow with limited city growth. The USA has very few proper cities, majority are clusters of villages e.g. Los Angeles. Hence the need for planned development of village clusters. Previous attempts
A predecessor to SPMRM was the Provision of Urban Amenities to Rural Areas (PURA), announced in 2003. This concept was given by former president Dr. A.P.J. Abdul Kalam and discussed in his book ‘Target 3 Billion’. It aimed at Provision of urban amenities and livelihood opportunities in rural areas to bridge the rural urban divide thereby reducing the migration from rural to urban areas. PURA was for holistic and accelerated development of compact areas around a potential growth center in a Panchayat (or group of Panchayats) through Public Private Partnership (PPP) by providing livelihood opportunities and urban amenities to improve the quality of life in rural areas. PURA is treated as a “Project” and not a government scheme – Private sector partner had to prepare a detailed business

PURA 2.0
Former Rural Development Minister Jairam Ramesh on 24 February 2012 launched the restructured PURA scheme that combines rural infrastructure development with economic regeneration in Private Public Partnership (PPP) mode and seeks to harness the efficiencies of the private sector. He slammed former concept of PURA (Providing Urban Amenities in Rural Areas) as a failure. He was of the view that, now the focus was on water supply, sanitation, physical infrastructure rather than knowledge connectivity

Expectations:
Physical connectivity by providing roads, electronic connectivity by providing communication network, and knowledge connectivity by establishing professional and Technical institutions will have to be done in an integrated way so that economic connectivity will emanate. Along with infrastructure development, the NRM should also look forward to skill development in rural areas. Agricultural productivity component should be paid attention to. 2% US population feeds entire nation, a dream long to cherish in India. In semi urban areas, related job creation should be focused on (e.g. food processing and other agro based industries). One-size-fits-all won’t work, NRM should take into consideration local conditions as geography, culture, etc.

The emphasis of scheme is self-reliance (as foreseen by Gandhiji- ‘gram swaraj’ self sustaining village economies).Meticulous planning in Rurban finance, better grassroots knowledge and central government’s direct involvement in NRM makes it promising scheme. Real test lies in whether it fulfills its promises or not.