6-Yr-Old Boy Gets 90 Stitches After Saving Little Sister From Dog Attack IN US, Wins Praise

When asked why the boy jumped in between his sister and the dog, risking his life, he is said to have told them, "if someone had to die, I thought it should be me." 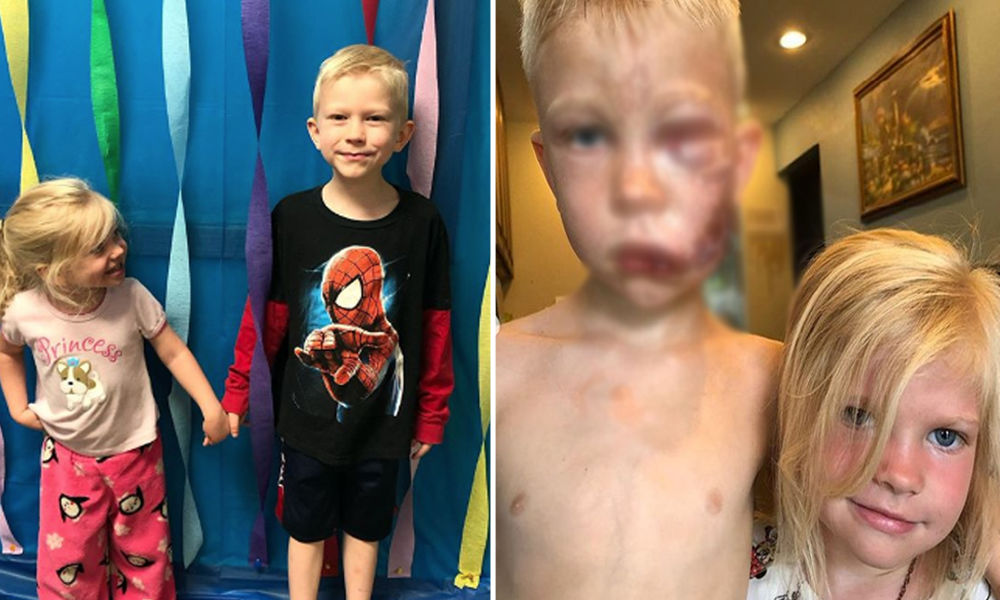 <p>Image Credits: <a href="https://www.instagram.com/p/CCr0OMNndnM/" target="_blank">Instagram/nicolenoelwalker</a></p>
"Not all superheroes wear capes" – this age-old idiom has been brought to life by a six-year-old boy from United State's Wyoming who was severely injured and received 90 stitches while saving his little sister from a deadly dog attack.

Bridger Walker became an internet sensation soon after the story of his extraordinary valour started making rounds on social media.

On July 9, Bridger jumped into action when a German shepherd charged toward his four-year-old sister, according to Global News.

"Tragically, instead of running off, the dog leapt and latched onto Bridger's cheek," the statement reads in part," read a statement by the boy's family, reported Wink News.

He reportedly held his sister behind him and suffered the brunt of the attack himself. He was bitten on the head and face repeatedly. Bridger subsequently had to undergo a two-hour surgery, spend a night in hospital after receiving stitches.

When his father asked him the reason for jumping in between his sister and the dog, risking his life, he is said to have told them, "If someone had to die, I thought it should be me," according to the statement.

The details of this deadly incident were posted by Bridger's aunt, Nicole Walker, on the image-sharing application Instagram where she also added pictures of the siblings.

My nephew is a hero who saved his little sister from an attacking dog. He, himself, took on the attack so that the dog wouldn't get his sister. He later said, "If someone was going to die, I thought it should be me." He got home from the hospital last night. I know it's a long shot, but I'm reaching out to the Avengers and other heroes so that they can learn about this latest addition to their ranks. Please, check your DM's for my sweet nephew's story. @tomholland2013 @chrishemsworth @robertdowneyjr @markruffalo @prattprattpratt @twhiddleston @chadwickboseman @vindiesel @chrisevans @vancityreynolds @thehughjackman Edit: I never expected my sweet nephew's story to reach so many. Please, follow my other post (I only have two so far 😅) for the latest info regarding my sweet nephew and his family.

Nicole started the post by calling her nephew a 'hero' for saving his sister form a dog. "My nephew is a hero who saved his little sister from an attacking dog. He, himself, took on the attack so that the dog wouldn't get his sister," she wrote.

"He got home from the hospital last night. I know it's a long shot, but I'm reaching out to the Avengers and other heroes so that they can learn about this latest addition to their ranks," she added.

Hey, all. Please, share my nephew's story so that it gets as much exposure as it can. We know that our little hero would love some words of encouragement from his favorite heroes. On July 9th, my six year old nephew Bridger saved his little sister's life by standing between her and a charging dog. After getting bit several times on the face and head, he grabbed his sister's hand and ran with her to keep her safe. He later said, "If someone had to die, I thought it should be me." After receiving 90 stitches (give or take) from a skilled plastic surgeon, he's finally resting at home. We love our brave boy and want all the other superheroes to know about this latest hero who joined their ranks. @tomholland2013 @chrishemsworth @robertdowneyjr @markruffalo @prattprattpratt @twhiddleston @chadwickboseman @vindiesel @chrisevans EDIT: I just finished visiting with Bridger at his home. His wounds are looking so much better! He's in great spirits, and his awesome personality is intact. He can't smile too widely yet, but he was grinning as I read some of your comments to him. I'd also like to mention here that the dog's owners are really great people who have been nothing but kind to Bridger and his family. We feel no resentment toward them at all, and—if anything—there's only been an increase of love between our families as a result of this incident. EDIT 2: Once again we're blown away by the amazing comments and messages that Bridger's receiving. I've had lots of inquiries about a GoFundMe. Bridger's family has asked that any one wishing to help out financially can, instead, donate to @mission_22 or @wwp. Bridger is also a huge fan of Science, especially Geology. So I'm going to start a post where people can share with him pictures of cool rocks that they see. EDIT 3: Once again, everyone's kindness has meant so much to us. I'm trying to get to all of the messages that I can, but it may take some time. For those who have inquired about sending Bridger some rocks, here's the address to use: Bridger Walker P.O. Box 22141 Cheyenne, WY 82003 #BridgerStrong

Moved by the young boy's story, Chris Evans, the actor who plays Captain America, made a video message appreciating the boy for what he did, and how he is no less than a superhero.

He also promised to send the young kid an authentic ''Captain America'' shield as a reward for his selfless, courageous act.

In the video, Evans is saying, "Pal, you're a hero, what you did was so brave, so selfless -- your sister is so lucky to have you as a big brother. Your parents must be so proud of you," Evans said in a video message that the family shared Wednesday.

"Keep being the man you are, we need people like you. Hang in there, I know recovery might be tough, but based on what I've seen, I don't think there''s much that can slow you down," he added.

There are no words. We are so, so thankful.

"I'm not an Avenger, but I know a superhero when I see one. I can only hope I'm half as brave in my life as you are in yours, Bridger," wrote Hollywood actress and celebrity Anna Hathaway.

I'm not an Avenger, but I know a superhero when I see one. I can only hope I'm half as brave in my life as you are in yours, Bridger. Wishing you an easeful recovery, and many cool looking rocks. ⁣ ⁣ Hey @markruffalo, do you need a teammate?? ⁣ ⁣⁣ Via @blackculturenews_ & @nicolenoelwalker