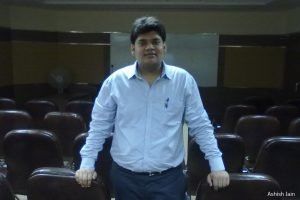 “It’s going to be a rather long post..But some food for thought as we start another busy week.

This incident made me and my partner Ashish Jain delve deeper into ourselves and introspect into how we have come to blame almost everything to do with the state of affairs of the country on the establishment.

We use our personal cars for travelling in and around the city for work. Trips to income tax department in central Delhi constitute a major part of our daily commute. One of these days, Ashish was travelling to the income tax office and as happens with many of us, he might have jumped the light. He said it was orange (you are ideally supposed to stop at orange also and not speed up further, as many of us do). Let’s assume it was red and he violated the rule. His eyes met a sight that causes our heart to jump out of our mouths. Less than 20 metres down the road was the cop who obviously stopped him and straightaway asked for his license and told him that he was going to suspend it for three months. Needless to add there were sessions of negotiations, bargains, even hefty offerings. But the cop said something that has stuck with us since then – “Sir, You would offer me even Rs 10,000 today for your license, it is that big a thing. But one – I do not accept money and secondly you would repeat it, if I don’t suspend your license. After this, the license was handed over to him without any further talks and we immediately knew that the ordeal for the next three months had just begun. With the license gone we realized that there were a few options now – one was to keep doing things business as usual and he keeps on driving, “who would come to know anyway” – this was trashed the minute we thought of it – as two wrongs would never make a right, second was to hire a driver – however after speaking to many of them, no one was willing to stick only for three months and the third one was to use public transport. We somehow decided on the third one. Thanks to the Olas and Ubers of the day, that he could even think of this option. Days went by and after the first week itself, we started looking out for a tout who could help with this. It was difficult to take a cab all the time, issues like non availability persisted and it was also causing a strain on the pocket, especially with the surge pricing being at its peak in May-June days. We ruled out the tout option quickly as we were reminded of the cop’s words “you would repeat it”. After the first fortnight, Ashish switched to taking a mix of the metro. autos, cabs and AC buses. The going was tough, he skipped certain meetings. He was late for some, which had never been the case ever before. He had to carry a heavy laptop bag, client files and his lunch with him wherever he went, since there was no car parked outside where things would be stuffed. I had to drive him down to certain important places where I had no business at all. On other days, he hired a driver for just those days. But he persisted and persisted. We kept telling ourselves – just a few days more.

And I very proudly share that somehow, anyhow a week back, he completed the entire period of three months. He called up the police station from where were supposed to collect the license from and the cop told us to collect it from there before 4.30 pm. as the public dealing for this particular thing was till then. We told him we would definitely be there. We reached a bit late – around 4.45. To our utter surprise the cop told us that he had been waiting for us and had thought that he would wait till 5 p.m. and would go off if we did not come by then. Ashish was delighted to receive his license to drive after three long months and I was relieved that I would no longer have to drive him.

Just as we were about to leave his room, the cop called us and asked feebly – “ek baat sach sach batana, aisa to ho hi nai skta ki aapne gadi na chalayi ho itne din” , the moment he finished this sentence of his, he would have felt the roof come down on him because both of us in an instant shot back saying we had totally abided by the law for the entire period of three months and not once did he drive the car. Going by our vehement rebuttal, he perhaps understood that we were telling the truth. He let out his hand and shook ours firmly, then got up to give us a pat on the back saying – you looked to have obeyed the rule; “but yahi problem hai ji, hum challan krte hain, license suspend krte hain aur long usi chowk pe/ usi gali se humare samne se nikal jate hain, jis admi ka license suspended hota hai wo mann mei sochta hai ki dekh paglon ki tarah khada hai firse wahi. Agar Aap jaise saare log ho jayen to samasya kaafi kam ho jaegi.”

After we walked out of the station, we did not speak for a while and then had a detailed discussion two thing:

1.) How we blame the establishment for everything For the There is lot of good amongst the bad, there is lot of hope to be clung onto and there is a lot we can do to make India the great nation that it is supposed to be. The only catch is that it has to start from me. It all started for us with the cop while cancelling the license saying “I don’t take money” After the end of the three months, we are now better drivers, never jump lights and obey all traffic rules. We understood what I.AM. THAT. CHANGE. actually means.

2.) And also the things/ luxuries/ comforts in life which we have come to believe to be quintessential are really not so.