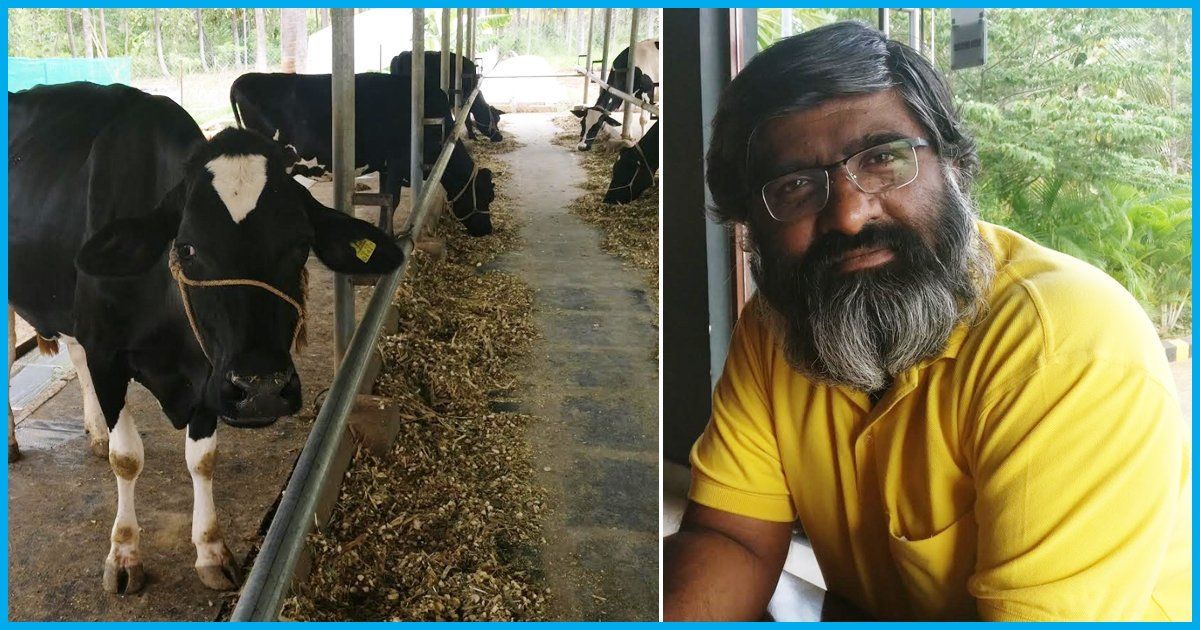 Akshayakalpa is an organic dairy farm and milk processing based out of Kodihalli, Hassan district, Karnataka. Established in 2011, converting farms to organic dairy farms has been an integral mission of their journey. Today, Akshayakalpa Farms and Food supplies bring nearly 8500 litres of organic milk to Bengaluru residents.

This journey started with nine techies who refused to pay bribes to get their way around the system. Sashi Kumar, a graduate of Illinois State University, just needed a signature from the Karnataka Department of Industries. The official did his part yet on his way back he received a call from the official who was furious as he did not pay any bribe. He wanted to teach him a lesson the next time Sashi would visit the office.

Sashi learnt his lesson and so did his partners. The nine techies who started the Akshayakalpa decided not to pay bribe through any form while starting and running their agricultural business. The milk processing farm has been set up under the guidance of renowned veterinarian Dr G.N.S Reddy and Sashi Kumar is the CEO of this organisation.

Setting up to full functionality of the organisation took eight years, it got delayed since the techies refused to pay any bribe. They faced severe harassment and humiliation at every step due to the staunch stand they took. Not paying bribe and not fuelling the larger scheme of corruption is a stand which makes this organisation stand out. Right from procuring land for the venture to change the use of farmland, the entire process of setting up the venture needed too many palms to be greased.

Refusing to bribe, buying the land was an uphill task in itself which took four years to be completed. They had to visit a couple of offices like Land Survey, The District Industries Centre, where seeking efficacy in work was only possible through adding fuel to the existing fire of corruption. They faced difficulties in getting the land registered and passing the files from the Directorate of Town and Country Planning took them several months.

The entire process got delayed, but no bribe was paid. An official visited the firm and reported objection, all rooting down to one cause, they refused to pay any bribe. The founders appeared for hearing and became successful in getting the objection quashed. “The investors have put in all their savings to fund the industry and being the hard-core idealists that they are, they struggled all they way to make the project operational,” said Ravi Krishna Reddy, the head of Forum For Building Bribe Free Karnataka, who is closely associated with the founders.

When The Logical Indian spoke to Mr Sashi Kumar Akshayakalpa, he said, “We are staunch believers of the Gandhian philosophy. We faced several problems, beginning from single window clearance, to getting connection of electricity, to Panchayat approval and even to purchasing the land and turning into an industry. We had to face major challenges when it came to working with the District Industries Centre and even the Taluk office. These government offices failed to give a proper directions and their stand did not comply with their sensibilities. We wanted to understand how to set up an industry at the rural area so that we could create a role model for other companies as well. Dr. Reddy, another co-founder, comes from Bharati Agro Industries Foundation Pune, and comes with a Gandhian studies background. We decided not to pay bribes.”

Akshayakalpa’s aspiration is to help farmer-family earn a net sum of Rs 1 lakh a month. Farmers are benefitted to a large extent through the help of Sashi Kumar. Milk is collected from 160 farmers of Tiptur, Arasikere and Chikkanayakanahalli taluks. They have set up dairy farm with technological and financial assistance from the farmers. The average income of farmers stand at 48000 per month and annual income has soared up to three lakh. Akshayakalpa provides specialised knowledge about vaccination repair and maintenance. This helps these farmers to invest in productive animals and labor-saving machinery.

They have touched the lives of as many as 29 youths. They have moved back to their native places to join hands with Sashi Kumar, in search of a better future. Akshayakalpa’s commitment to buy milk at Rs 30 per litre has been a big draw for the dairy farmers of this region, which gives them a profit of Rs 4 per litre. Akshayakalpa is one of the firms to incubate rural entrepreneurship based business models.

On asking Mr. Kumar about his message to The Logical Indian community, he said, “We believe that the only way of generating true income is through agriculture. The foremost thing we must realise is that the future to all sustainable living lies in our roots, we must go back to agriculture and take it up as a full time job. Whatever little lands we have, we must go back and till it. We must understand that agriculture is a positive income generation opportunity and we must encourage the best of minds to work for it.”