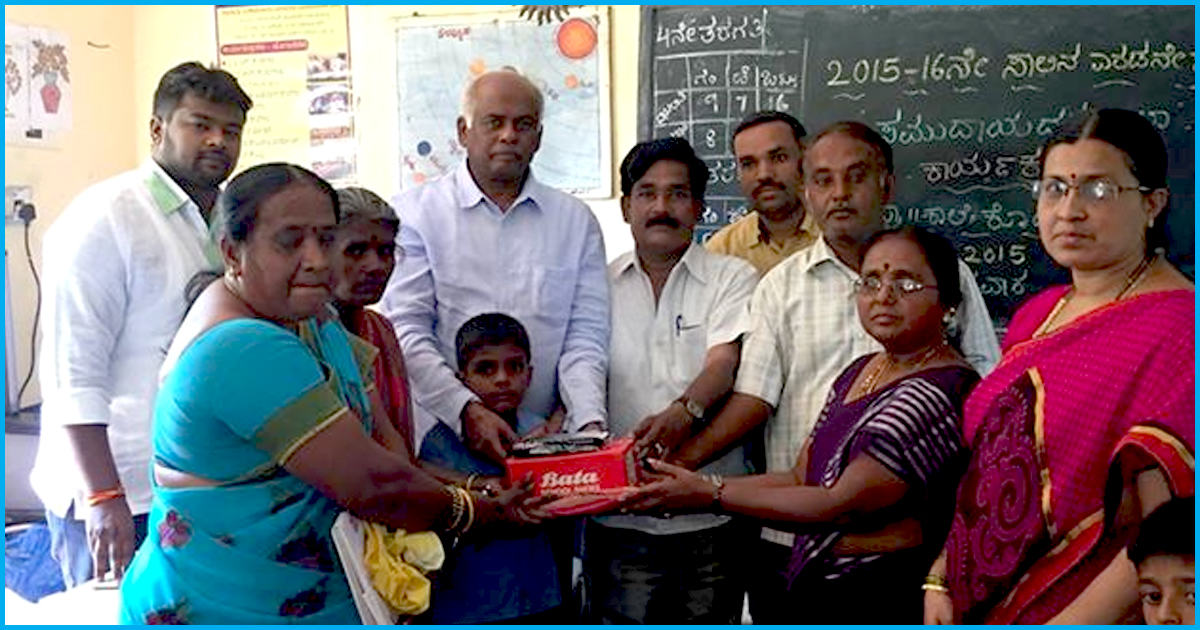 Kodigehalli, a suburb in Bengaluru, is an abode of modern constructions and historic temples. In a part of Kodigehalli lies a government school with 80 students and three teachers, however, how the school runs is indeed an interesting story.

The 80 students who study in this school mostly come from poor backgrounds. Their parents are daily wage workers and cannot afford to send them to private schools. H. Venkatesha, a resident of the village, is the main reason behind these kids getting educated in the school. Venkatesha has been the President of the School Development and Maintenance Committee for the last 39 years. He has been elected by the parents of the students. The school is a primary school and has students from classes I to V.

How Venkatesha helps the children

“I have grown up in the village in a poor family and hence know the struggle it takes to get the basic education. Since I have faced difficulties during my childhood, I have always wanted to help those who need education but cannot afford it. I, with the help of friends and family and donors, have been providing these students with uniforms, shoes, books, stationery, sweaters and everything else they need,” Venkatesha said in a conversation with The Logical Indian.

Not stopping here, Venkatesha’s son provided the school with a water purifier worth Rs 15,000 and Venkatesha’s daughters provided it with steel plates for the students to eat on. With the help of a trust, Venkatesha has arranged mid-day meals for the students, ensuring that they get nutritious food, including milk. The children, coming from poor families, do not get enough food and whatever they do get is not nutritious enough. Living in a village, belonging to a poor family, may be difficult in the sense that one does not have access to proper food and pure water. Venkatesha has ensured these children get all of these and lead a healthy life.

“Apart from all that I am doing for the children, I want to mention that it is a matter of immense pride and honour for me to have hoisted the National Flag 78 times in my life till date. I hoist it twice every year, on Republic Day and on Independence Day,” Venkatesha said.

With the help of some donors, they have also built additional rooms in the school worth Rs three lakhs and provided reading desks worth Rs 5 lakhs. Soaps and detergents have also been provided to every student so they can learn to maintain hygiene. He is also the President of an association called Kodigehalli and Layouts Welfare Association, fighting against the illegal encroachments of graveyard and lakes in the village.

“There is a slum near the school with about 100 families living in it. The children of these families are deprived of education. Some of them had also taken to begging. So we went to the village and managed to convince their parents to send them to school. We have appointed a lady who brings them to school every day, just in case they do not do it themselves,” said Venkatesha.

Venkatesha has himself studied in a government school and is a BA graduate. He is also a retired ITI officer and a former village panchayat vice chairman.

“I have a son and three daughters, all of who are well educated. I have not let them face the difficulties I faced as a child, and have helped them grow up to become educated and honest citizens,” he said.

The Logical Indian appreciates H. Venkatesha for his effort to make education a priority and help these children become good human beings.