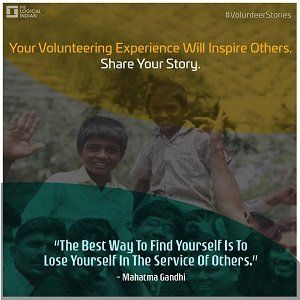 Leaving His Stable Infosys Job, He Found An Organization To Transform Schools In Low Income Areas

As one walks through the narrow streets of Goripalya, Bengaluru, one can witness the chaos within. As one’s eyes get adjusted to the garbage and fleeting visions of rats darting through open drains, one notices a harmonious blend of the hustle and languid. The streets are particularly jammed with a variety of vehicles, and in the midst of it all, there are students disappearing into the many adjoining streets clutching lunch bags, with backpacks slung over their shoulder, all wearing different uniforms. Goripalya is a signature example of an avenue where the affordable private schools mushroomed in dozens owing to the unpopularity of the Government run schools.

One of our partner schools in Goripalya holds its stead by being one of the many alternatives that parents turn to get their ward literate in English. If I take a walk down the memory lane, the school could easily be described as the tower Rapunzel was held captive. Narrow staircases leading up to the classrooms that just weren’t sufficient to hold close to 900 students, overworked and tired staff due, a completely exhausted administrative person (singular!), an irritable and stressed Principal and kids with pants hanging low, shirts undone running all over the little space available to them. This was the building for the high school. An adjoining annexe told the same story with kids aged from three to twelve.

A glimpse into the Principal cabin showed you what it would look like if papers came alive and took over the world. The Principal started the school with the intention of serving the community kids but remained buried in the tonnes of paperwork and financial matters that came his way and few of what comprises the meagre staff also used to get pulled in to manage this large school in the little space. All these problems notwithstanding, the teachers were more often than not, under – qualified and barely equipped to handle classrooms of forty or more kids. No amount of campaigning for quality teachers brought them to the area due to the stigma associated with “slums”. The children rarely met grade level standards, and their discipline was out for a toss, and the school infrastructure barely met the minimum standards.

As Mantra4Change did its month-long need analysis exercise, we realised that low teacher productivity, among other issues in the school, was a result of many factors. It was one link in the vicious circle that prevented quality education from being delivered. This led us to be a part of the school, its processes and its problems – the whole package. The exercise of blending in with the system opened up a whole new way of viewing the problems. We started out by helping with the little ones. For example we got volunteers to teach in regular and extra classes, got question papers and blueprints for the 10th graders, brainstormed ideas to solve multiple operational issues, convinced the Principal to invest in a few more hands to help him with the administrative chores, helped address the disciplinary issues by setting some standards and procedures. As life became easier, teachers less stressed and Principal freer, everybody was suddenly in a mood to listen and learn. We thus launched our well-researched teacher professional development modules on classroom practices, long term and short term planning, et al. We employed the Indian version of a Trojan Horse!

For a Principal, who was mostly known as a ‘Hitler’ and not ready to listen, a little bit of head space worked wonders. He was slowly transforming and along with him, so was the school. It started off with small things that we initially failed to notice. He began taking ownership of the academic progress and procedures of the school. He began taking ownership of the attendance of teachers during training sessions, started sitting down with new teachers to explain lesson planning, recruited more teachers, increased the salary of the staff, started observing classes and even attended the training. This motivated us to launch a variety of projects in the school including the inclusion of Montessori Method in the pre-primary section of the school. Read more about it here.

Propelled by the changes in attitude of teachers and improvement in classrooms, we have gradually increased the rigour of our intervention. In the second year of our association, the teachers showed motivation and readiness to start planning their units in advance. The Principal invested time and money in creating a second tier of instructional leaders in the school, which is now independently functioning. The rate of change within the school has accelerated. There are teaching aids in Teachers’ Learning Centre; Learning circles are being conducted within the school by the second tier leaders, discipline among students has improved as a by-product of improved classroom management, morning assembly has become more structured and meaningful, the school has a functional computer lab and additional classrooms. Regular assessments are being conducted to inform the teaching-learning processes in classrooms.

“Sir has become a different person. He smiles more often now, and he doesn’t shout. He talks to us with respect, listens to us and appreciates good work.”, one of the teachers in the school gushed happily when asked how she felt about the Principal now.

There are more infrastructural facilities for children. There is continuous professional development for over 25 teachers on a regular basis, and there are regular brainstorming sessions at the leadership level. While changes are many in the school, for Mantra4Change, the most effective of them has been the shift in the mindset of the school Principal and the teachers. The school culture is more collaborative and encouraging now. The Principal believes in his team, and the trust is well-founded. He participates actively in the professional development of his teachers. He analyses data from monthly Reading and Mathematics assessments. The analysis is openly shared with parents to maintain transparency. The focus has entirely shifted from just ‘running’ the school to delivering quality education. The change chain has solidified as the higher echelon of the school feels empowered enough to not only run their school efficiently but also to accept and adopt changes and to include other schools in this fight for quality education.

“Mantra should intervene in more schools in Goripalya. If our school can benefit from you, then so can the rest of Goripalya. After all, all of them are our children, and I would be happy if all schools improve. ”

Having said that, this is not the end of it all. There are everyday issues that the school faces that include the shortage of trained teaching staff, loads of paperwork from the Government, etc. The fight, therefore, goes on, but the difference is that now the fight is fought together.

Now, there is a firm belief in the possibility of change, and there is hope that solutions exist for all problems.

About Mantra4Change
Mantra4Change is a not-for-profit organisation, founded by Santosh More and Khushboo Awasthi. It is working in the field of Whole School Transformation. They hold themselves accountable to the vision of making quality education available to all kids, no matter what socio-economic backgrounds they come from. To this end, Mantra4Change partner with existing schools serving the children from underprivileged sections of the society for a two-year period to achieve the capacity building of school staffs (Administrative, teaching and non-teaching) and improved learning outcomes for students. The project is named STEP, i.e., School Transformation and Empowerment Project.

Currently, They are working with 13 schools in Bangalore across three different educational blocks. Visit their Facebook page for more details.

Santosh More always believed that the answer to global problems lies in education. As he wondered what he could do to improve literacy rates, he found the perfect opportunity for this when he saw Teach For India’s call for change-makers.

He was employed in a stable job at Infosys, and so convincing his father that he wanted to quit his job was not easy. His managers also wanted him to stay, but he made up his mind. He felt it was an opportunity to do what he dreamt of all his life.