The country's senior citizens, who had been struggling to keep up with the technological advancements, were hit severely with the onset of the COVID-19 pandemic and the social exclusion had also led to anxiety and loneliness amongst them. To tackle this issue head-on, Mahima Bhalotia from Maharashtra's Mumbai has been spearheading an initiative to digitally empower the elderly citizens.

The art of clicking a perfect selfie, sending a text via WhatsApp, ordering food online, or booking a cab were some of the tasks that secured a spot on the digital learning wish-list of the elderly persons.

According to a survey conducted before the coronavirus-induced lockdown, 60% of elders felt that their children do not have time to help them with technology-related lessons.

The survey was carried out by HelpAge India, a non-governmental organisation that works towards the care and upliftment of the disadvantaged older persons in the country. The analysis took inputs from 1,580 elderly persons across several cities in eight states, reported The Times of India.

It revealed that more than half of the participants were keen on learning how to use online banking portals, paying utility bills, ordering food, and medicines online. Others wanted to make the most of the technology and also learn how to use Google Maps, create email accounts, and use video-calling applications.

Around 47% of senior citizens learned how to use digital devices on their own, followed by those who were taught by their sons (25%) and daughters (18%).

The study brought to the fore, the fact that the country's senior citizens, who had been struggling to keep up with the technological advancements, were hit severely with the onset of the COVID-19 pandemic. This social exclusion had also led to problems of anxiety and loneliness amongst them.

To tackle this issue head-on, 26-year-old Mahima Bhalotia from Maharashtra's Mumbai has been spearheading an initiative to digitally empower the elderly citizens.

With her initiative, The Social Paathshaala, Mahima donned the role of a coach and has been conducting online sessions on digital learning for her special students who are aged above 50. "The COVID times forced a lot of elderly people to stay indoors to keep themselves safe and most of them were technologically handicapped due to their lack of knowledge of the digital world.

My father's frequent discussions with his fellow senior citizen-friends revolved around how they had to depend on their acquaintances and kids to order groceries and medicines online. It was always my wish to do something meaningful, but due to my corporate life stint, I never had the chance to start something of my own which would be fulfilling as well as fun. After losing my job to the COVID crisis, I finally made up my mind to kickstart the program," Mahima told The Logical Indian.

Mahima explained the reasons for taking up a cause that practically required an immense amount of patience especially when it had to be conducted virtually.

"I wanted to find happiness in what I do. My family encouraged me to start The Social Paathshala as they believed that I could help senior citizens in technology due to my compassionate and loving nature.

When I started reading about an increase in the number of fraud cases during the pandemic, I noticed that the majority consisted of senior citizens and the first thing that came to my mind was to know the reason. I discovered that a lack of awareness of the online world was behind such incidents, then I took it upon myself to provide something valuable to that age group.

The first session of the initiative was for my extended family in Kolkata who learned some basic, yet useful WhatsApp features. They always thought that WhatsApp is so basic, isme kya sikhaogi (what will you teach us?)" but I knew few things which would definitely help them. Since then, there has been no looking back," said the young socialpreneur.

Describing the mechanism of her digital paathshala, Mahima said that virtual sessions are organised every Sunday from 11 am to 12:30 pm and charged at ₹99 per person for one session. This time session has been decided after taking into account several requirements and comfort of the elderly.

The interested bunch can reach out over a call or through a WhatsApp text. After a discussion with the interested candidates, they get to join the sessions for the topics they like and choose.

"All the online sessions are conducted with a lot of patience, interaction, and perseverance. A maximum of 25-30 participants has been allowed in the sessions as it requires a lot of hands-on practice during the class. The students are treated like friends so that they don't hesitate to stop us and ask doubts.

Classes usually start with a round of applause to acknowledge their efforts to learn something new at this age. The class is 95% practical demonstration class queries and aspects related to both android and iOS users are covered. The topics range from basic to intermediate concepts about social media and the digital world," explained Mahima. Spilling beans on how the idea of making the older generation tech-savvy dawned on her, Mahima told The Logical Indian that it was a year-old initiative which culminated in her office canteen.

On one particular day during the lunch, Mahima's boss confided in her about the frantic calls that he was receiving from her mother and how he was unable to help her with booking a cab because of the work.

Although Mahima had the idea at her hand, she could not execute it due to her work commitments and the idea never saw the light of the day.

"With the onset of COVID-19 pandemic, I got a lot of time in my hand. My mom suggested me to restart The Social Paathshala again. I wasn't sure. I thought that why will elderly people opt for online classes?

Their children can help them. Why will they pay me? My Mom told me to give it a try. I didn't refuse. I advertised in local newspapers because that is where my target audience was. I woke up the next morning, flooded with phone calls where people wanted to learn everything related to technology.

My first ever student was a 67-year-old whom I fondly call the 'advocate uncle.' I helped him to open a Facebook account in the first session and about other platforms in the later classes. He was overjoyed to be able to find and connect with his childhood friends," said Mahima. 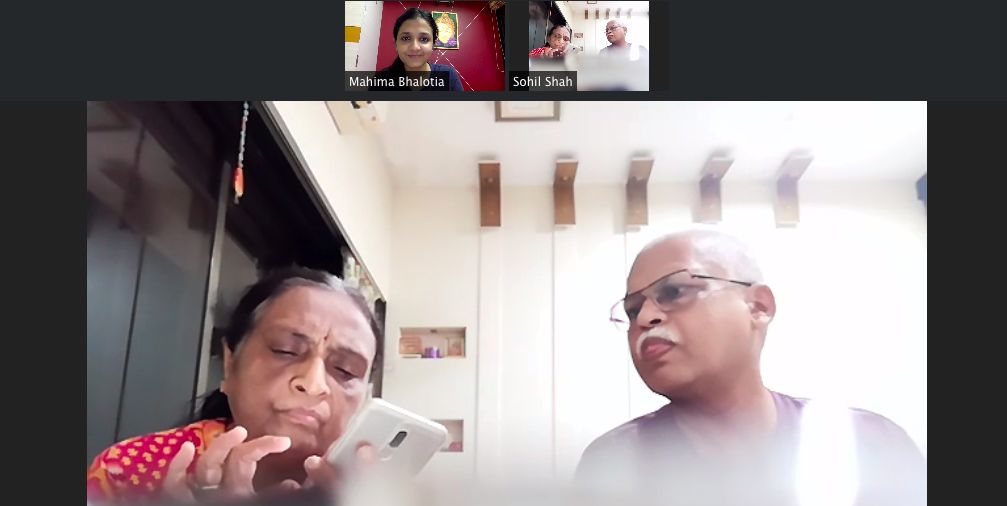 Highlighting the challenges that the young changemaker faced while carrying out her initiative, she said, "While teaching basic technology may sound easy to a lot of people, very few know the plethora of challenges I had to face as an entrepreneur and trainer at The Social Paathshala. The biggest challenge is learning to be more patient with every passing day. The doubts raised by the senior citizens are basic, however, the real challenge lies in clarifying such doubts to people who have never felt comfortable with using technology."

"There are challenges but one can definitely overcome it with love, patience, and understanding," Mahima added.

She also shared some anecdotes from her students from which she mentioned that she derived a lot of humour as well as life lessons.

"My first ever student was a 67-year-old advocate from Mumbai. He had been independent throughout his life and was facing an issue in sending a gift to his grandson, whom he couldn't meet during the pandemic. I suggested that he can shop online, but he said, 'Nahi nahi, I don't want to use my credit card, it is risky.' It took me five days to explain the process to him and eventually, he did shop online. He was extremely enthusiastic about learning technology and used a lot of things which he learned in the class, like - setting reminders, sending location on WhatsApp, sharing contacts with other friends on WhatsApp, etc.

Another adorable story is of my 69-year-old Civil Engineer student who stays alone in Mumbai with his wife and mother. Both his daughters are married and he is a happy-go-lucky person. He did not know how to order food online and wanted to learn the same. His wife is an ardent fan of pizzas and wanted to eat from Domino's during the lockdown. He especially took a class to fulfill that wish and learned how to order pizza from Dominoes and other food items from food delivering apps," Mahima shared. Talking about other initiatives within The Social Paathshaala and her future plans regarding it, she said, "We are now working with homemaker ladies to help them understand the digital space. I noticed that these homepreneurs could grow manifold if they turned to the online platforms."

Mahima has also been collaborating with several NGOs by identifying the organisations that serve senior citizens and reaching out to them. Secondly, by getting in touch with organisations and groups which her students are a part of.

"My future plans comprise of expanding this initiative globally as I know that there are a lot of senior citizens in the world who are not digitally empowered. It is my purpose to help them adapt to this new normal so that they do not have to wait for their kids to get free and help them. I firmly believe in the quote by Mahatma Gandhi - "Be the change you wish to see in the word" and I find pure joy by making a difference in people's lives," she added.