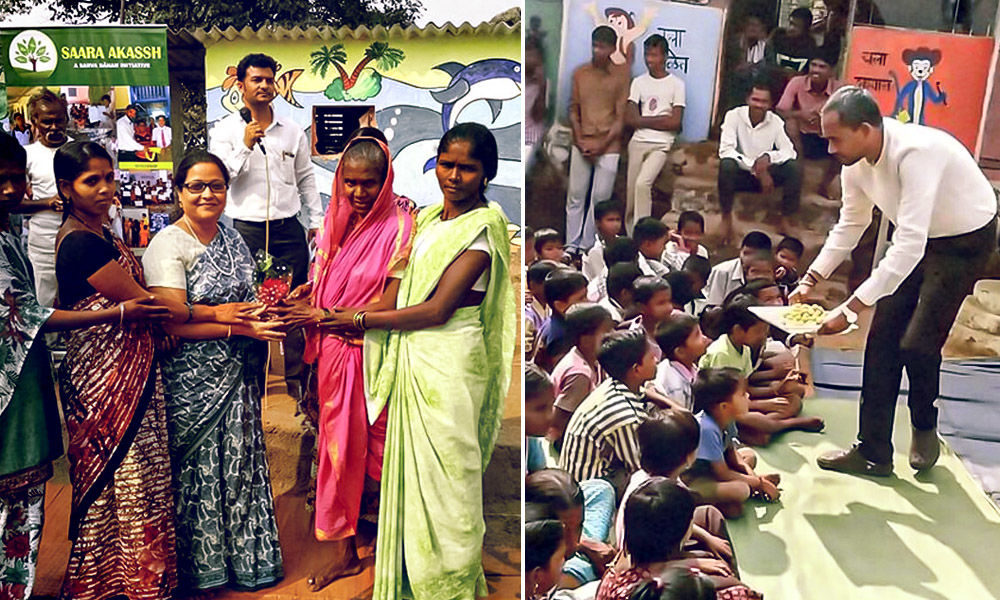 From Education To Ensuring Access To Nutritious Food, This Mumbai Couple Has Transformed Adivasi Lives

Ravi Narayan and his wife, Shital visited several tribal-dominated villages in Thane and found out that there was a severe lack of access to basic amenities like quality food, education and medical facilities.

A one-time visit to a few tribal villages to donate sweets during celebrations for Sankranti turned out to be a life-changing experience for a Mumbai-based couple.

Ravi Narayan, working with one of India's top automobile companies and his wife, Shital, a full-time counsellor visited several villages including Pejawadi, Karpatwadi and Musrundi in Thane. Little did they expect that their visit would eventually pave the way for a transformation of these villages.

On reaching the villages, they found out that the community were diseased and malnourished. The children looked starved to bones, practically with no access to nutritious food necessary for their growth. The women were forced to travel miles to collect clean drinking water while the entire village spent days with a below-par standard of living.

Lack of access to basic needs like quality food, education and medical facilities was taking a toll on the health of the villagers and this was occurring close to a cosmopolitan metropolis! On witnessing the plight of such marginalised communities, Ravi and Shital decided to step in to help, even if it meant giving up weekends and pooling in extra hours post work.

On conversing with the villagers, the couple had realised that having lived a significant part of their lives in the absence of crucial facilities, the people could not understand the importance of bringing a change and how it would improve their lives.

"For some of them who have never stepped out of the village, they had no clue how these facilities could change their lives, making the whole task a strenuous challenge for us. Also, the paucity of funds made things all the more difficult because it was about setting up a village from scratch, which meant huge expenditures," said the couple.

However, driven by a strong intent to bring a change in the lives of these Adivasi groups, and with all the help they could gather from their families and relatives, Ravi, Shital, and their son, Aakash dived into this initiative.

The team decided to first tackle the challenges related to health and malnutrition. They set up health camps to identify and offer proper treatment to the children who were malnourished.

Educating the children on health and life skills was next on the agenda. Programs were introduced to help them learn significant skills that would help them survive in the big cities.

Next, they set up medical and eye camps for the villagers, for which they visited every single house to explain the reason why the check-ups were important, how medicines could help and how further treatments could ease their lives.

They expanded the initiatives to spread awareness on menstrual health management. They tried to rope in community members to donate for the cause and today, one of their biggest achievements has been making the villages open-defecation free by installing toilets in 40 households.

They've also laid the foundation to make basic drinking water available to each house. Ravi and Shital have made the villagers believe that there's hope and a better way to live.

"Recalling moments of people smiling because they had a healthy meal or they feel better due to treatment has been the most gratifying moment for us. However, these experiences are just the beginning," they said.

Knowing for a fact that they had to give up on their family time, weekends and even personal funds, the feeling of gratification while serving has made Ravi, Shital and Aakash come back and give more.

By investing all the time and energy they have, they are always looking out for like-minded people who would want to join this circle that they have started, for the upliftment of these villages and more in the future.