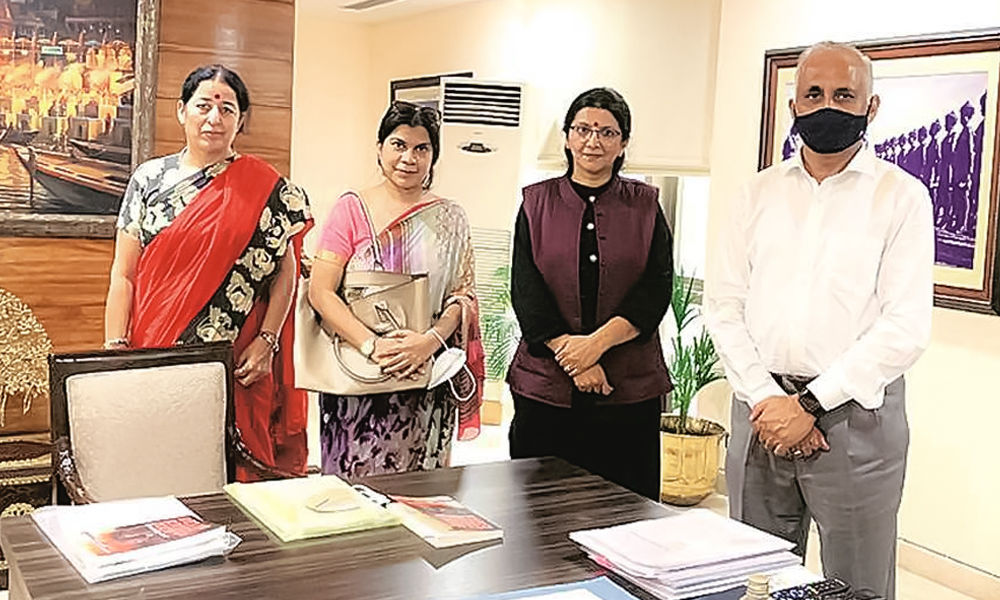 The complainants have accused the publishing house of cheating, mischief, misappropriation of property and criminal intimidation.

The authors of the book "Delhi Riots 2020: The Untold Story" have filed a complaint against publishing house Bloomsbury, some media organisations and noted individuals with the police on Thursday, September 3. The complainants have accused the publishing house of cheating, mischief, misappropriation of property and criminal intimidation.

Meeting Delhi Commissioner of Police SN Shrivastava with their complaint, the authors sought "immediate and necessary action" against those named in it.

The complaint accused professor-activist Nandini Sundar and news portals The Print and Newslaundry of "illegal receipt and retention of stolen property", and several noted individuals, including historian William Dalrymple and author Aatish Taseer, of "criminal intimidation and (making) statements creating and promoting enmity, hatred, and ill will between classes", NDTV reported.

The book was authored by advocate Monika Arora and professors Sonali Chitalkar and Prerna Malhotra. Massive controversy was sparked for inviting BJP leader Kapil Mishra as a guest of honour on its launch on August 22.

Several BJP leaders, including Mishra, have been accused of making inflammatory speeches targeting anti-citizenship law protesters before the Northeast Delhi riots broke out.

Bloomsbury later withdrew itself from the book, saying the virtual launch was "organised without its knowledge". Publishing house in Garuda Prakashan later took it up.

The complaint, signed by Arora, said that Bloomsbury "wilfully with dishonest intentions expunged her work and also leaked a PDF version of the book in public to hamper any future sales".

"The present complaint seeks investigation... for being the publisher of my authored book and having deliberately, willfully with dishonest intentions expunged my work, effort and skill thereby diminishing my goodwill, reputation and standing, without my knowledge and consent rescinded from performing its obligations under the terms of the agreement dated 29.5.2020 and leaked a PDF version of the book in public to hamper any future sales," read the complaint.

Refuting Bloomsbury's claims, the complaint said that an e-poster of the book launch event, along with the list of "confirmed speakers", was sent to the publishing house. Bloomsbury had allegedly acknowledged it.

The complaint stated that the publisher's parent company Bloomsbury UK pressured it to withdraw.

"The book launch event was widely publicized on social media platforms with full knowledge of the Publisher. 100 physical copies of the book were delivered as per the terms of the agreement by the Publisher to the Author on 1.8.2020. On the date of the launch, at 3:30 PM, the Publisher phoned the Author to say that it was considering withdrawing the book on account of pressure of its parent company, and from certain other persons on social media," it added.

According to Arora, a "venomous campaign" emerged on the social media and a "group of individuals/ propagandists'', whom she referred to as "Urban Naxal Gang", "conspired and went all out to kill the book by pressurizing, intimidating, bullying and blackmailing the publishers".

Further, the complaint accused media houses The Quint and NewsLaundry, and professor-activist Nandani Sundar for critiquing the book. They were accused of attempting to discredit the authors' work based on a leaked or "stolen" PDF copy of the book.

"How in the world would they have got their hands on the book if not for this unauthorized circulation. As on date, there is no other physical copy in existence except for those 100 copies that had been delivered to me. Thus, despite knowing such a version was 'stolen property' neither the aforesaid media houses nor Ms Sundar chose to take any appropriate legal measures to bring it to the notice of authorities," it said.

Some individuals named in the complaint have also reacted to it.

"I'm actually glad this has happened. This should remove all doubt, in anyone's mind, that these were not independent writers at all, but a state-sponsored syndicate, dedicated to whitewashing the role of certain BJP leaders in the Delhi Riots," tweeted Taseer.

"This is an attempt at intimidation by BJP-linked authors using Central agencies bcoz we spoke against their vile book full of lies & minority-blaming on the Delhi Pogrom. This complaint is a joke. But the one I file about the contents of the book with @DGPMaharashtra won''t be," tweeted Gokhale.

"Wow..... just learnt this. now coming after us with state machinery. We will not allow literature and publishing to platform hate," tweeted Kandasamy.