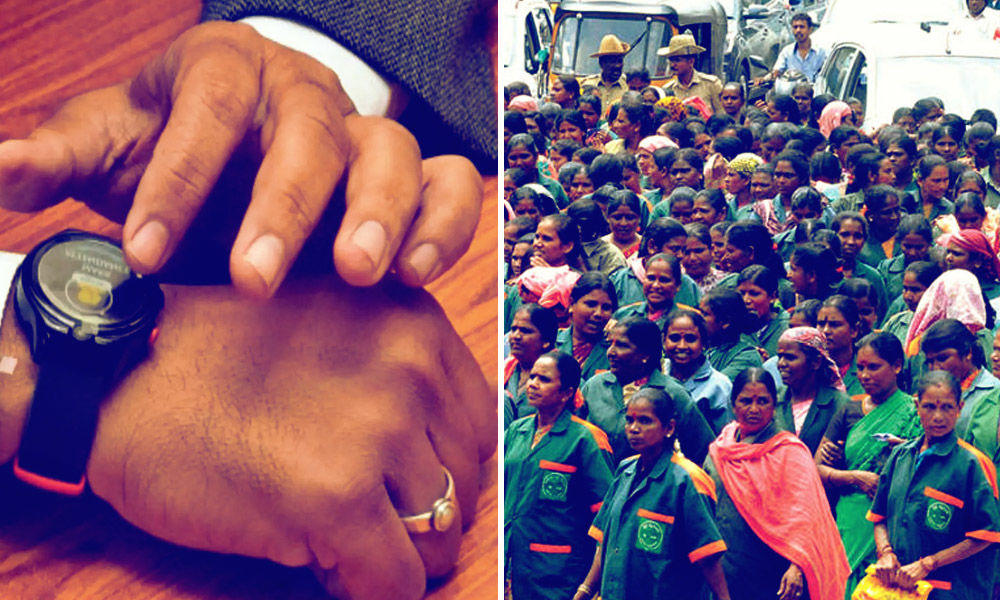 The orders that have been perceived as a breach of one's privacy. Most importantly, the workers have complained of the watches negatively impacting their health, causing vomiting and whirling sensation.

The sanitation workers attached to the Municipal Corporation in Chandigarh have raised their voices and threatened to stage a protest if the orders to wear the 'GPS-enabled' watches are not withdrawn.

According to The Indian Express, the President of the Safai Karamcharis' Union, Krishan Kumar Chadha, said that a protest, earlier, on the same issue was called off after the authorities ensured of looking into the matter.

However, reports have suggested that no conclusion was reached regarding the orders that have been perceived as a breach of one's privacy. Most importantly, the workers have complained of the watches negatively impacting their health.

"We will shut down the city and won't collect any garbage. Neither our sweepers will sweep nor any waste will be lifted if our demand is not met," said Chadha.

The publication reported that in February, the safai karamcharis had informed that they were experiencing a 'whirling' sensation and feeling giddy on wearing those watches to work.

"These watches are affecting the health of sanitation workers. We are getting complaints of many who have suffered swelling on their wrists, getting vomiting and whirling sensation. A worker can die. Municipal Corporation is treating employees like slaves," read a statement addressed to the Municipal Commissioner.

A report by The Tribune stated that the Municipal Corporation authorities introduced the tracking devices so that the residents and the concerned department officials could keep a watch on the sanitation workers deputed in their respective wards.

It further added that a functional-website would enable the residents to highlight the presence of workers and register complaints in case of the workers are absent or fewer than designated numbers.

Several media reports have also pointed out that the civic body was incurring a cost of ₹18.68 lakh per month to the corporation for renting the watches. It has been of the view that the smartwatches were aimed at monitoring the attendance of its staff, maintain transparency and accountability. Additionally, to remove ghost workers.

However, apart from the health and privacy concerns, certain councillors have reportedly raised the issue that the watched were registering faulty locations. It said that the location was being shown at remote areas in Uttarakhand when the employee was in Chandigarh.

How are employees' privacy rights infringed upon during the pandemic? In India, sanitation workers in Chandigarh are being made to wear tracker watches that come w/ a camera, mic AND GPS tracker?! https://t.co/mZSnBM7vLw