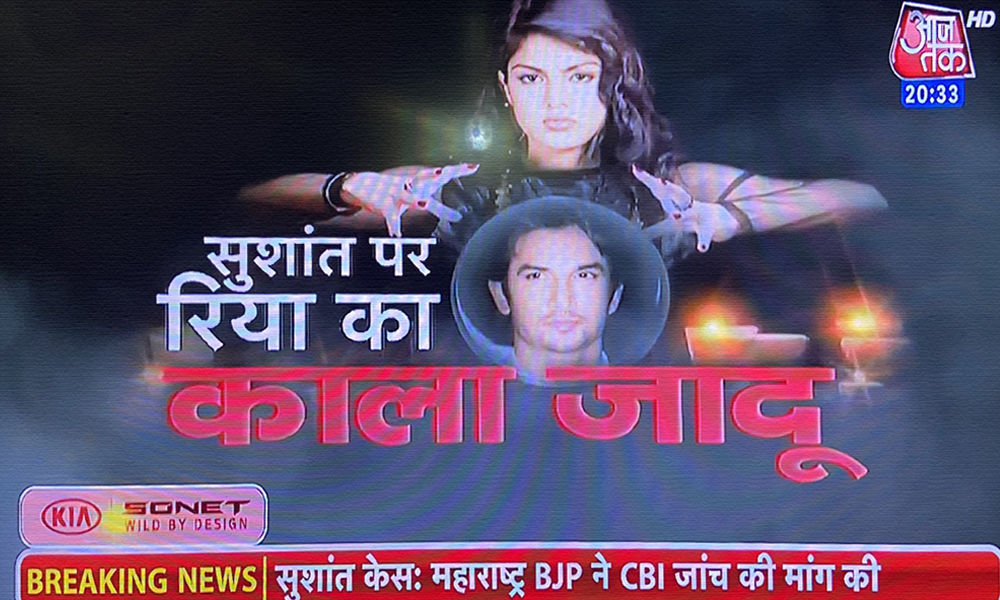 From Twitter To Aaj Tak, How Bengali Women Are Being Witch-Hunted To Serve Justice To Sushant Singh Rajput

While Netizens have begun a hate campaign against Bengali women, who, as per their understanding, are "gold-diggers"and "manipulative", Aaj Tak aired a show titled "Sushant par Rhea ka kaala jaadu".

Controversies around the death of actor Sushant Singh Rajput have refused to die. Only now, the issue has taken a ridiculous turn with trolls taking to social media to mock Bengali women for apparently possessing mystical powers and performing black magic.

All this began after police started investigating a possible case of money laundering in connection with actress Rhea Chakraborty -- who is a Bengali. Police investigation taking its course wasn't enough for netizens, who unleashed their wrath on the actress in the form of vicious name-calling and undisguised misogyny.

These jibes surfaced hours after reports of Sushant's family alleging that Rhea had performed black magic on the late actor.

STAY SAFE MEN / BOYS .
Bengali girls are dominating, they know how to make guys fall for them.
They catch big fish, good looking highly paid guys. If you want to be her servant and financer and are okay to leave your family and join her family then go ahead😊😊#RheaChakroborty

Not stopping here, netizens went on to begin a kind of hate campaign against Bengali women, who, as per their understanding, are "gold-diggers", "manipulative", "dominating", and "bish kanya" (poisonous daughter). Bengali women are also sorcerers who "use their husbands for ATM" and "ruin men's careers".

These discussions are not just senseless but laughable at the same time, and it is difficult to come to terms with the fact that people in this era still believe that stereotyping a particular community, calling them names and trolling them could serve justice to a deceased person.

Had the issue been restricted to netizens, we might as well have blamed it on their ignorance and lack of reasoning. However, journalism hit a new low as Aaj Tak aired a show titled "Sushant par Rhea ka kaala jaadu".

Anchor Anjana Om Kashyap said on the show: "Sushant's sister has accused Rhea of doing jaadu on her brother. Going by the family's statements, if we analyse Rhea's role, it reveals that she only came to Sushant's life for money and career in the film industry."

This shocking statement by a channel which should ideally be the voice of reason, has infuriated many social media users, who also pointed out that this was potentially criminal, attracting sections of the Anti-Superstition & Black Magic Act of Maharashtra, 2013.

This shows how journalism in the country is in a sorry state. Taking to Twitter, journalist Rajdeep Sardesai wrote: "This is beyond amusing: it's bizarre. all this while 'noise' channels created a TRP driven 'insider' Vs 'outsider' narrative for Sushant suicide. Now, it's shifted to 'gold-digger' girlfriend! We might as well turn our studios into courtrooms where we prosecute without evidence!"

This is beyond amusing: it's bizarre. all this while 'noise' channels created a TRP driven 'insider' Vs 'outsider' narrative for Sushant suicide. Now, it's shifted to 'gold-digger' girlfriend! We might as well turn our studios into courtrooms where we prosecute without evidence!

Black Magic -- A Tool To Pull Down Assertive Women

In a very recent incident from June this year, a 42-year-old woman and her two daughters in Gujarat were allegedly assaulted and thrashed by their distant relatives on suspicion of being witches.

Although the hate campaign in question is against only Bengali women, the fact remains that the male-dominant society has for decades been using black magic as an excuse to pull down assertive, opinionated women, asking them to mend their ways.

It surely must be difficult for society to deal with those who refuse to be submissive, and do not tolerate being wronged and violated. Bengali women have been accused of being "dominating"; of course, it is not easy to put up with a strong, independent, free-willed woman who refuses to cower before men who have for decades been contributing to a system that is patriarchal, male-dominant and unsafe.

The irony here is that while netizens are asking men and boys to "stay safe" from Bengali women who "catch big fish" and "good looking highly paid guys", it has always been the opposite -- women are the ones who have to protect themselves, at every step -- from trolls, abusers, harassers, molesters, and rapists.

We do not know why Sushant Singh Rajput took his life, perhaps because he did not want us to know. Pinning the blame on women for anything that goes wrong needs to stop. Let investigation run its course and reveal what was wrong. Let's not become judges in our social media courtrooms.

The controversy around Rhea Chakraborty was only an excuse to bring to the fore, yet again, society's persistent interest in attacking people of certain communities, stereotyping them, ridiculing and harassing them and trying to make them bow down to intimidation and pressure.

Most of the time, however, these people misjudge the strength of those they try to oppress, and underestimate their power to fight back.