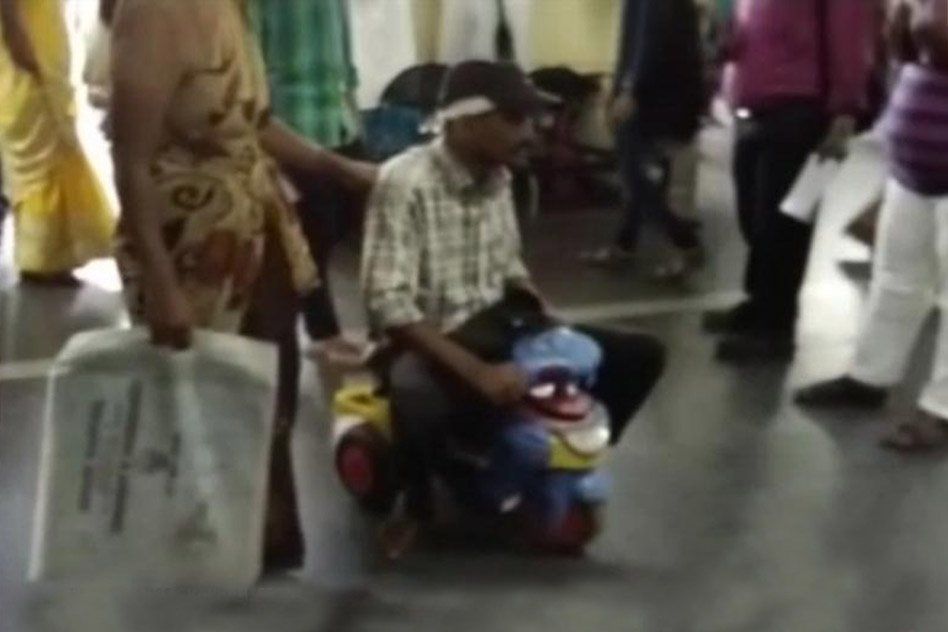 On one side there are excellent health-care facilities for the affluent urban class, and on the other end, there is barely any amenity for people to take care of their loved ones in case of an emergency, and death. Concerned with the state of public health care and to restore the confidence of people in the system, Telangana government in the budget expressed its intention to uplift the medical services.

But this recent incident has come as a big blow to the effort. A patient was forced to use his kid’s mini-scooter to reach doctor’s ward as he was unable to pay 150 Rupees as a bribe for a wheelchair at Telangana’s biggest government hospital, Gandhi Hospital.

The 33-year-old Patient, Raju had met with an accident in August last year and was awaiting surgery for his head injury for six months.

Raju and his wife, Santosh would pay for the wheelchair before, but due to a cash crunch, they started using their child’s mini scooter as they are poor as they could not afford to pay Rs 100-150 for a wheelchair every time.

After the accident, Raju was treated at Gandhi Hospital for two months and was discharged after it. The family was told to arrange blood before the surgery and ever since whenever the family visits the hospital, they are denied the bed facility.

Speaking to News 18, Raju’s wife Santoshi said that they have four children and are facing a very tough time. The doctors say there are no beds and ask them to arrange 4-5 packets of blood so that the surgery can take place. They don’t know anyone there to go for help.

Seeing Raju and Santoshi speaking to media persons, the hospital authorities promptly provided Raju with the wheelchair, as claimed by News 18. The couple is now appealing to the government to help them in arranging blood and getting the surgery moved up.

The Logical Indian have reported such events in the past that clearly exposes the failure of healthcare facilities in our country. Be it Uttar Pradesh or Odisha or Chhattisgarh, the apathy of doctors and medical staffs is turning out to be gruelling for many people. Many of the people have lost their lives without getting access to proper medical treatment. The government of each state should intervene and try to work towards the betterment of healthcare facilities in the country.