30 Years Ago, A Young Woman Scientist Discovered The First HIV/AIDS Case In India 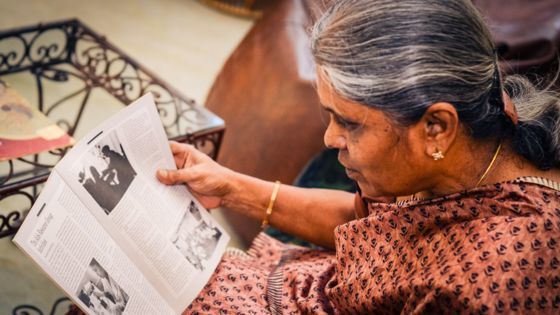 It was 1986, exactly thirty years ago, when India discovered that the worldwide dreaded HIV virus had reached its shores. It was established when blood samples from six sex workers in Tamil Nadu tested positive. A large share of the success goes to the efforts of a young scientist – Sellappan Nirmala.

It was at the end of 1985 when 32-year-old Nirmala, a microbiology student at the medical college in Chennai, was looking for a topic for her research. The idea came from her professor and mentor, Dr. Suniti Solomon. When it was first suggested to her to screen people for HIV/Aids, Nirmala hesitated. Solomon, however, persuaded her to give it a try.

Preconceived notions
Formal tracking of Aids cases had begun in the United States in 1982 and the medical authorities in India didn’t want to be caught napping if the disease reached India. The press at the time wrote that HIV was a disease of the “debauched West” where “free sex and homosexuality” were prevalent. Indians, on the other hand, were portrayed as heterosexual, monogamous and God-fearing. Some papers even remarked smugly that by the time the disease reached India, the Americans would have found a cure for it. Moreover, the city of Chennai and the surrounding Tamil Nadu region were considered especially traditional societies. Hundreds of samples, collected from the supposedly more promiscuous city of Mumbai, had already been tested at the virology institute in Pune and no positive results had turned up so far.

The beginning
It was decided that Nirmala would collect 200 blood samples from high-risk groups like sex workers, gay men and African students. Nirmala had previously worked bacterial disease transmitted from dogs and rodents, and she knew nothing about HIV or AIDS, thus making the task even more difficult.

What’s more, she had no idea where to find her subjects – unlike the cities of Mumbai, Delhi and Calcutta which have well-known red-light districts, Chennai had no fixed address for sex workers. So she began frequenting the Madras General Hospital where many women were treated for sexually transmitted diseases.

There she befriended a couple of sex workers and they would point out other sex workers to her. When she looked at their forms, she saw that many had ‘V home’ written on them, which stood for “vigilance home” where prostitutes and destitute women were remanded by the authorities.

So every morning, before going to work, Nirmala began dropping in at the remand home to visit the sex workers.

She was encouraged by her husband, Veerappan Ramamoorthi, who supported her every step of the way. Often, he drove her to the remand home on his scooter. Overcoming all odds
Over three months, she gathered more than 80 samples. She had no gloves, no safety equipment. And the sex workers had no idea what they were being tested for. Solomon created a small makeshift lab with equipment borrowed from her husband, a heart surgeon, and others in which she and Nirmala separated the serum from the blood samples. In the absence of a better storage facility, Nirmala kept them in her home refrigerator.

The confirmation
As there was no facility for ELISA testing in Chennai, Dr Solomon arranged for the samples to be tested at the Christian Medical College (CMC) in Vellore, 200km away. When the lid was opened, it was observed that six of the samples had turned yellow. The expert checked the results and confirmed that there were six positives.

Before they returned to Chennai, Nirmala and her husband were sworn to secrecy. After returning to Chennai, Nirmala went to Solomon’s office and broke the news to her. The samples were taken again and tested at US where a Western Blot test confirmed that the deadly HIV virus had indeed arrived in India.

The grim news was conveyed to the Indian Council for Medical Research, which informed the then-prime minister Rajiv Gandhi and then-Tamil Nadu state health minister HV Hande. When Hande announced the bad news in the state assembly in May, Nirmala and Solomon were seated in the visitors’ gallery.

Public reaction
The initial reaction of the people was disbelief. Some questioned the tests; some said the doctors had made a mistake. Solomon, who died last year, was particularly singled out by the critics since she was an outsider. Solomon hailed from Maharashtra.

Aftermath
The authorities began a mad scramble to come up with a response. This was just the tip of the iceberg. They had to get down to work quickly. Authorities launched massive screening and prevention programs.

Over the years, HIV-AIDS turned into an epidemic in India, growing rapidly, pervading every corner of the country. For years, it was believed that India had the maximum number of infected people in the world with 5.2 million infections – until new estimates in 2006 nearly halved that number.

But even today, more than 2.1 million infected people live in India and the deadly disease, which still has no cure, remains a killer.

Nirmala today
Nirmala went back to her studies. She had to still collect more than 100 of the 200 samples she had agreed to screen for her thesis. Over the next few weeks, she continued to visit remand homes for sex workers and prisons to meet gay men. In March 1987, she submitted her research – Surveillance for AIDS in Tamil Nadu – wrote her exams, passed, and joined the vaccine production programme in the King Institute of Preventive Medicine in Chennai, from which she retired in 2010.

Except for the few press reports at the time about her triumph, there’s been little recognition of her pioneering work. But she doesn’t care that.

“I was brought up in a village. There no-one gets excited or depressed about such things. I’m happy I got this opportunity and I’ve done something for the society,” she says.