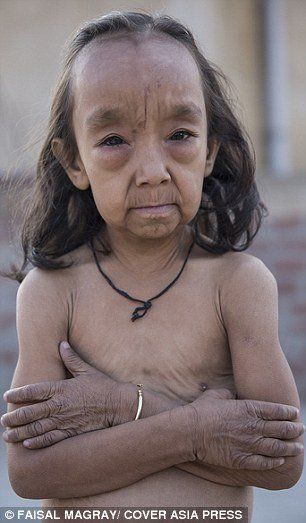 Remember the Brad Pitt-starrer 2008 movie The Curious Case of Benjamin Button? It’s the movie where Brad Pitt’s character (Benjamin Button) is born as an old man and ages in reverse, growing younger throughout the film. Well, it was a concept of fantasy which was adapted into the reel life from the great American author F. Scott Fitzgerald’s short story with the same name.

Surprisingly, we have a ‘real-life’ Benjamin Button siblings in India. Seven-year-old Anjali Kumari and her brother 18-month-old Keshav Kumar from Ranchi, Jharkhand have been suffering from a rare genetic disorder, giving them a rare skin condition which makes them look much older. The doctors who have diagnosed them have said that they suffer from a rare form of progeria and also a disease called Cutis Laxa, which in India is incurable.

Born to father Shatrughan Rajak and mother Rinki Devi, Anjali and Keshav also have an older sister Shilpi, 11, who do not have the disease.

Due to their looks, they are teased quite often. Anjali gets called in school by many names, like Daadi amma (grandmother), budhiya (old lady), bandariya (monkey), or hanuman (a Hindu monkey lord) , reports Mail Online.

At an age of seven, Anjali find it difficult to face all these humiliation. She hopes one day she and brother will be able to look normal. Their father Shatrughan being a laundry man, earns barely a sum of Rs 4,500 per month, which makes it more difficult for them to seek good medical treatment. He can only afford to pay for some homeopathic medicines, which is not helping his kids anyway.

Sister Shilpi is also very protective about her siblings. She doesn’t like anyone who teases them and hopes someone will co0me forward and help them out.

The doctors have told them the only hope to for treatment is in abroad.

The Logical Indian urges that if anyone knows any possible way of cure for these kids, please approach to help them.