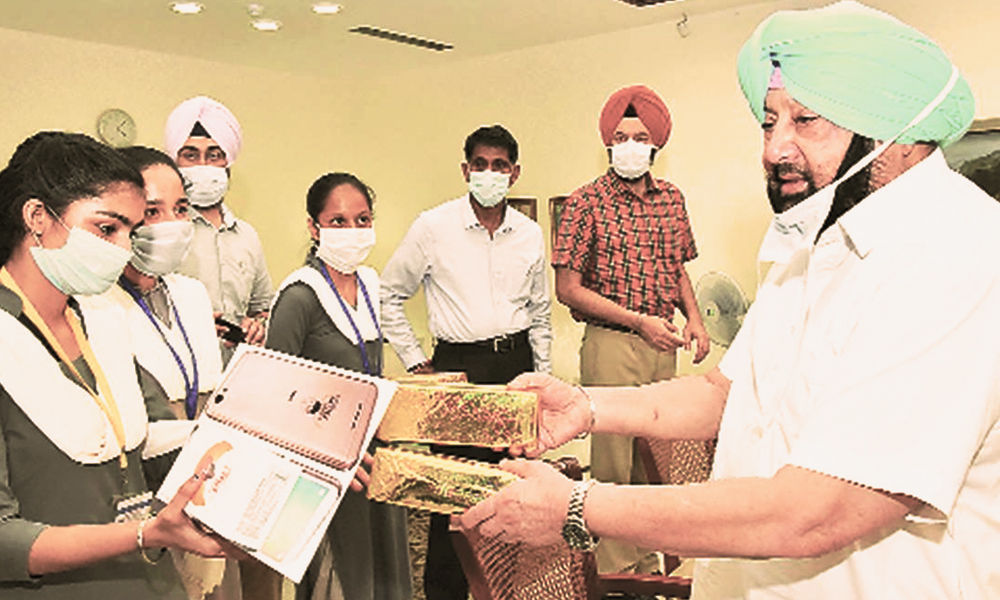 Many beneficiaries of the state government's ‘Punjab Smart Connect Scheme’ were those whose parents or families did not have smartphones or those who had to share it with their siblings.

"The #Covid19 pandemic has taught us the important role of technology. I am happy that we have started #CaptainSmartConnect by the distribution of smartphones to Government school students. Hope our students use the phones well for online education and make us all proud," the CM tweeted.

The #Covid19 pandemic has taught us the important role of technology. I am happy that we have started #CaptainSmartConnect by distribution of smart phones to Government school students. Hope our students use the phones well for online education and make us all proud. pic.twitter.com/8vyiUPMzYd

On Wednesday, the phones were simultaneously distributed at 26 places by various ministers, MLAs and others across the state. To launch the scheme in various districts, each minister handed over 20 phones each.

The CM launched the scheme via video conferencing at the Secretariat, on the occasion of Janmashtami and International Youth Day. Among those who received the phones from the CM are Arshdeep Kaur, Satinder Kaur, Sukhbir Kaur, Amanjot Singh, Ram Singh and Amanveer Singh from various Government Senior Secondary Schools of Mohali.

Pooja, a class 12 student from village Dau Majra in Ludhiana, who was struggling to access online classes as she had no smartphone is among the beneficiaries of the scheme.

"Now, I will be able to keep pace with daily syllabus and won't miss any class and or updates. Those who had smartphones never faced any problem. My father earns ₹12,000 a month and he could not afford to buy a separate phone for us," Pooja told The Indian Express.

Pooja is one among four siblings and her father is a 'feri wala' who moves from village to village selling utensils. To complete their homework, she and her brother would go to their respective friend's home to borrow their smartphones.

Similarly, for Harpreet Kaur from Ludhiana's village Jallah, her father is the only one in her family who owns a smartphone. However, as her father works as a truck mechanic and returns home only around 9 pm, Kaur's homework would remain pending until then.

"Even when he reached home, I had to share the phone with my two other siblings who too go to school. I would get the phone for very less time and it wasn't always possible to complete the pending work," said Kaur.

After receiving the smartphone under the government's scheme, Harpreet said that she now won't have to wait to complete her work.

Like Pooja and Harpreet, many beneficiaries of the scheme are those whose parents or families did not have smartphones or those who had to share it with their siblings.

"I have been borrowing phone from my cousins to complete homework. There was always the issue of timing as they too have online classes to attend. My mother works as domestic help. She can't afford to buy a smartphone for us," said Sukhandeep Kaur from Government senior secondary school, Payal (Girls). As her father is a patient of acute anaemia, he hasn't been working for months.

After getting a smartphone now, she said, "Now at least we have one smartphone in our own home and we siblings can adjust as per our timings. Students like me weren't able to study during lockdown because of lack of smartphones. My paternal uncle's children are still facing same problem, I hope they too get phones like me."

In the case of Vineet, a class 12 student from Government Senior Secondary School (Boys), Jawahar Nagar, Ludhiana, his father does not have a smartphone. While his elder brother has one, he hardly gave it to Vineet.

"Now I have my own phone and it is a big relief. I don't have to depend on him to complete school work," said Vineet.

"After my husband's death, I am working in a hospital for ₹8,000 a month. I cannot afford to buy a separate smartphone for Harmanjit. Her education was suffering. Now that problem has been solved at least," said Surinder Kaur, a single mother from Moga.

Meanwhile, Amandeep Kaur, from Moga's village Mallianwala, whose father earns ₹300-350 daily while working as an agricultural labourer had no smartphone at home. Like Vineet, while Amandeep's elder brother has a smartphone, she was hardly allowed to use it.

"Though now I have to share phone with my another sibling who also goes to school but at least now I don't have to beg my elder brother. I am elated today. I can even click a selfie or two to take a break from hectic schedule," she said.

The scheme, worth ₹92 crore, was aimed to "encourage and incentivise" youth to use digital technology in day to day activities entailing education, career opportunities, access to skill development and employment opportunities, and was one of the major poll promises of the state's Congress government during the 2017 assembly elections.

Majority of these students are from the OBC and SC/ST categories, thus helping them to access online education. Of this, 36,555 are OBC students, 94,832 are SC and 13 are ST students. Furthermore, while 1,11,857, are from rural areas, the rest are from urban government schools.

Speaking at the occasion, the CM said that people believe in the promises listed in the election manifesto and hence, it was his duty to ensure the implementation of each of them.

He added that the scheme was aimed at empowering the poor youth who could not afford smartphones and added that in the present COVID-19 pandemic situation, these phones became all the more important as they had become a necessity for education. While the plan was to distribute the smartphones in March, it got delayed due to the current COVID-19 crisis.

Sharing a video of Pallavi, one of the beneficiaries of the scheme, the CM tweeted, "It is heartwarming to see that we could help students like Pallavi with #CaptainSmartConnect Scheme. Smart phones will immensely help many students like her in getting access to online education especially during #COVID19."

It is heartwarming to see that we could help students like Pallavi with #CaptainSmartConnect Scheme. Smart phones will immensely help many students like her in getting access to online education especially during #COVID19. pic.twitter.com/5zbIG5RamH