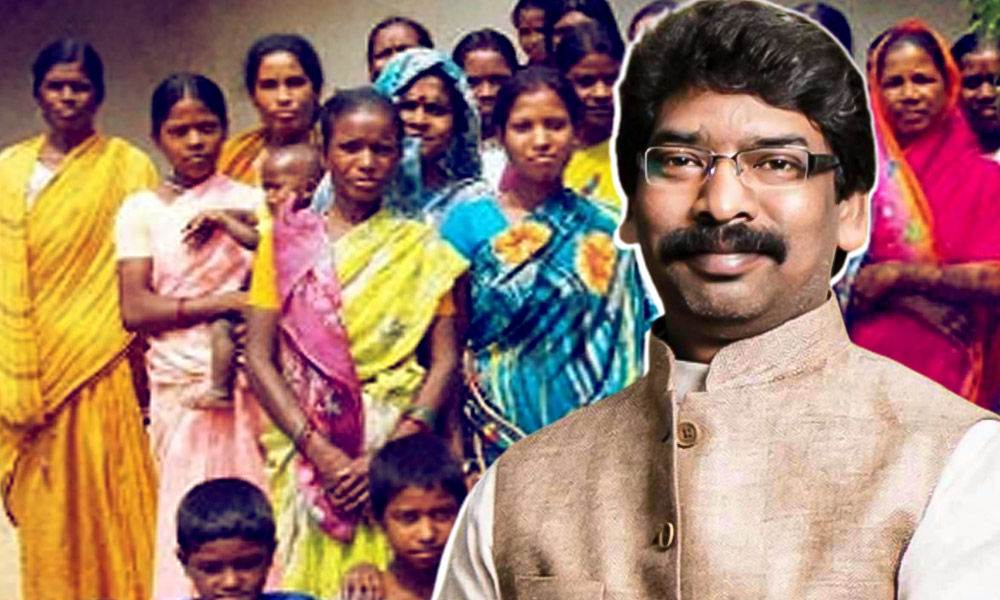 The data released by the state rural development department has stated that out of the 16,549 women identified for the purpose, a massive 7,117 have been provided with an alternate source of income under the ‘Phulo-Jhano Aashirvaad Abhiyaan’.

The coronavirus pandemic has impacted lives substantially, forcing people to take up odd jobs for survival —particularly the ones from the marginalised community.

In the state of Jharkhand, women from rural areas resorted to selling locally-made alcohol (handia) to tide over the financial crisis. However, the state government, through its scheme, has been striving hard to identify and help such women earn a dignified living.

According to The New Indian Express, a significant number of women have now quit selling liquor and have moved to alternative sources of income like poultry farming and sewing with the assistance provided by the government's 'Phulo-Jhano Aashirvaad Abhiyaan'.

The data released by the state rural development department has stated that out of the 16,549 women identified for the purpose, a massive 7,117 have been provided with an alternate source of income. The women were identified under 'Mission Navjivan' survey and were selected to be given loans and counselling sessions.

Chief Minister Hemant Soren launched the scheme on September which would provide a loan of ₹10,000 that would aid in the rehabilitation of such women. Self-help groups would extend the training sessions on business and entrepreneurship to the identified beneficiaries.

26-year-old Shweta Hansda, a resident of Jamtara's Fatehpur village, brewed and sold handia at her home for a living. The profession had been passed onto her by her mother-in-law and she had been selling it for over three years.

However, after the launch of the Jharkhand government's scheme, Shweta was reportedly provided with a loan of ₹50,000 and guidance from a local self-help group (SHG) which helped her open a ration shop.

"Due to financial constraints, I had to sell handia for three years. But after being motivated by the SHG didis and with the financial help from the government, I have opened a ration shop in my village and now earn around ₹ 6,000 per month," she said, reported The Times of India.

"My husband, who works as a daily wager, has stopped fighting with me. Most importantly, the entire atmosphere at my house has changed: the customers don't fight with each other over 'handia' share after getting drunk," she added.

"I am happy to have gotten out of the liquor brewing business with the help of SHG women. Villagers respect me," said Sushila who was aided by the Jharkhand State Livelihood Society.

Sutali Devi who hails from Telmunga village under Bokaro's Kasmar block started running a PDS shop with the loan that was provided to her. She said that her children's future made her take the conscious decision of changing her profession.

"I changed my profession for the sake of my children's future. Brewing liquor didn't ensure a regular income, but this shop has provided me a regular source of income for my family," Sutali said.

Kalawanti Kumari and Laxmi Devi of Santaldih village under Chas block in Bokaro along with Biti Soren of Badasapadaha village in Pakur started a roadside eatery and have been earning around Rs 1,000 every day.

"Only two months back, we opened this eatery, and the income is far more than what we got by brewing liquor at our homes," said Laxmi Devi.

"We often had to go to local moneylenders. Not anymore, our income is enough to meet the requirements of our families," said Biti Soren.

Sanju Devi of Palamu said that she has been selling alcohol since 2017. About 12 other women from her village were also involved in this but everyone has given up this work. With a loan, Sanju bought a sewing machine and is now also involved in farming and animal husbandry. Under the scheme, all 12 women are now benefitting through poultry, goat rearing, farming and other activities.

State Rural Development Secretary Aradhana Patnaik said besides opening a path to a dignified living, the scheme has helped in making the women socially and economically independent. She also believes that once these rural women get to learn about alternative opportunities, they would rather stay on a cleaner path for their families.

"We are convinced that once these women earn through alternative sources, they will quit the 'handia' business," she added.

She further congratulated the women in making the scheme a success.

"I congratulate all of you for making the scheme a success. I would urge you to keep up the good work and to encourage more rural women to familiarise themselves with the livelihood scheme that offers interest-free loans for entrepreneurship," said Patnaik.