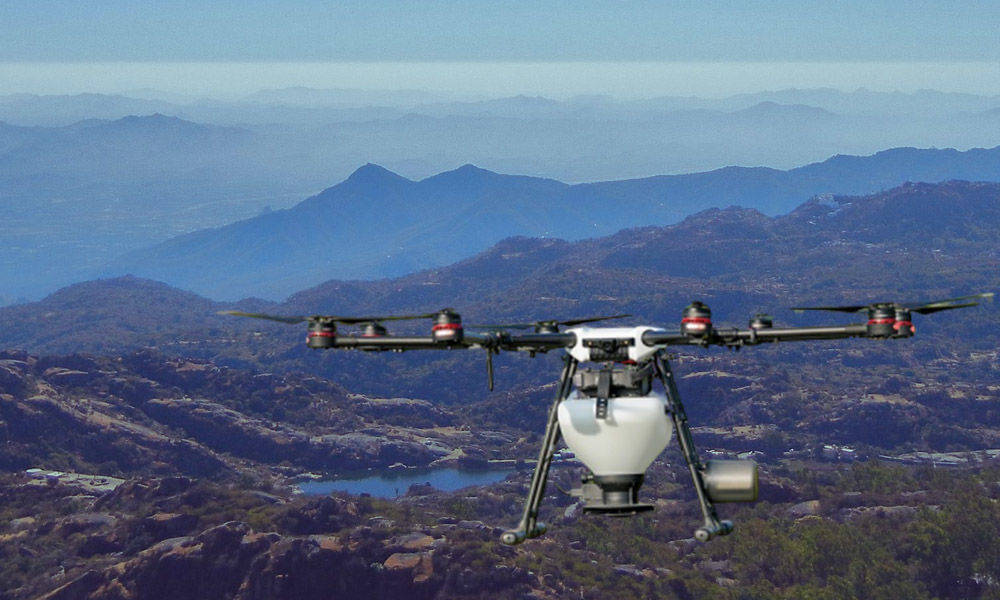 Aerial seeding is mostly used to increase the green cover of an inaccessible terrain having steep slopes, fragmented or disconnected areas having no forest routes for normal tree plantation activities.

In an effort to improve the green cover in the Aravalli area of Faridabad, the Haryana Forest Department is using drone technology to facilitate aerial seeding.

In aerial seeding, seed balls or seed pellets - seeds covered with a mixture of clay, compost, char, and other components - are sprayed from the air, officials said. In Faridabad, "seeding drones" developed by a startup incubated at IIT-Kanpur will be used to disperse the seeds.

Under this technique, the low-flying drones will disperse the seed balls/pellets in a targeted area. The coating on the seeds will provide the required weight for the seeds to airdrop on the pre-determined location, without getting deterred by the wind. When there is enough rain, these pellets will sprout, with the nutrients present within them helping in the initial growth.

Aerial seeding is mostly used to increase the green cover of an inaccessible terrain having steep slopes, fragmented or disconnected areas having no forest routes for normal tree plantation activities.

"In the context of the Aravalli region…, this will be specially useful since there are many areas that are either difficult to reach or inaccessible altogether, making traditional methods of plantation difficult," an official from the Faridabad Forest Department was quoted as saying by The Indian Express.

One of the major advantages of this method of planting is that the process of the seed's germination and growth happens in such a way that it does not require any attention after it is dispersed. This is also the reason why seed pellets are known as the "fire and forget" way of plantation.

The use of seed pellets also eliminates the need for any ploughing and digging holes in the soil. Since they are already surrounded by soil, nutrients, and microorganisms, they also do not need to be planted. In addition, the clay shell also protects the seeds from birds, ants and rats.

The project was done in Haryana on a pilot basis "to regenerate the low vegetation density or denuded areas on inaccessible or difficult sites" of Aravalli and Shivalik hills, said Principal Chief Conservator of Forests Dr Amarinder Kaur.

According to officials, the project had begun on July 18 and ended on Wednesday, July 29. It covered as many as four districts of Faridabad, Yamunanagar, Panchkula, and Mahendergarh, reported Hindustan Times.

In the pilot phase of the project, the method of plantation was implemented on 100 acres of land "to test efficacy of the seed dispersal mechanism and review the success rate", according to Dr Amarinder Kaur, Principal Chief Conservator of Forests. The drone seeding exercise was carried out with an average of 5,000 seeds per hectare.

"It will also provide work opportunities to the local community, especially women, who can prepare the seed balls," Kaur added.

The seeds chosen for the plantation are those that are native to the area and hardy. The seeds also need to be of an appropriate size for preparing the seed balls and should have a higher survival percentage.

The species which were planted in the Aravalli areas include Acacia senegal (Khairi), Ziziphus mauritiana (Beri), and Holarrhena spp (Inderjo), all of which have a higher chance of survival in these areas.

A forest department official said that 50,000 seeds of the nearly five lakh seeds disbursed were showered in Aravallis in Faridabad district. The official added that two drones were used for this exercise.

According to officials, a single seeding drone is capable of carrying 2 kg of seeds at a time. Equipped with a "precise delivery mechanism" for seeds of different sizes, the drone drops the seeds at predetermined intervals. A single drone is capable of planting 20,000-30,000 seeds per day.

"The seeding drone is programmed to take a load of 2kg and is equipped with a precise delivery mechanism to drop seeds of different sizes at encoded intervals from a low height of 10 to 15 metre," said Vinod Kumar, Additional Principal Chief Conservator of Forests.

"The drones will disperse 5,000 seeds per hectare. Survival rate in this sort of plantation tends to be low, less than 50%. So, the point of planting such a high quantity is that, even if the survival rate is 20%, we will have 1,000 trees," Kumar said.

The drone-based aerial seeding technology has a very high chance of success if seeding is done timely and preferably, before the onset of monsoons, according to the officials. Under this technology, a proven artificial intelligence-based system is also required to assess the area for plantation sites and selection of the site-specific local species.

According to Kaur, using satellite imageries in Aravallis, the geo-location of blank patches and low-density areas can be mapped. The data generated can then be directly fed into drone software for auto plantation, which is an easier method.

The officer added that currently, the forest department is working on the development of mobile-based application to "collect forestry intervention and monitoring data from the field for better management of forest areas."

"The objective of this exercise is to ensure that all areas including difficult sites is brought under green cover. Seed dispersal using drones help in reaching difficult sites in short times. As the monsoon has come, we expect good germination this time," Kaur said.

Meanwhile, environmentalists said that since the Aravalli landscape is a semi-arid region with little rainfall, re-greening has always been a challenge.

"I have been working on restoration and rewilding of Aravallis for the last 12 years. I have tried several native species of Aravallis such as Doodhi, Dhak, Dhok, Barna, Basa, Ronjh, and Khairi with seed balls and I can reasonably say that we have failed. I have tried this over several years in plots and monitored the plots.. Except for a few Doodhi germinating once in a while, I didn't see any other species doing well," said Vijay Dhasmana, curator, Aravali Biodiversity Park.

The drone-based aerial seeding technique was first started in 2019. The officials said that, due to little late dispersal, the seed germination rate during the time was around only 15 per cent. However, this year, 20-30 per cent germination is expected as the dispersal is very timely.