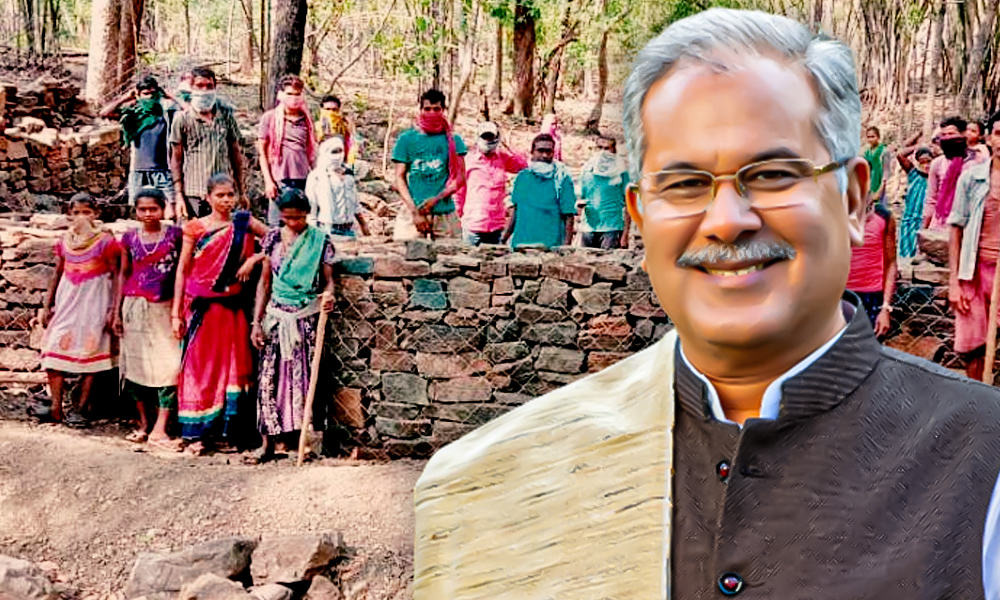 Contributing to the government’s current efforts, a unique project that was launched in the 1990s, the ‘Gajra Nala’ project to recharge water channels and river drains has started yielding results —availability of water to the farmlands throughout the state.

Chhattisgarh is leading the way in conserving water using scientific methods to ensure groundwater retention, availability of drinking water for the people and wildlife inhabiting the forest region of the state.

The Bhupesh Baghel-led government recently announced that it had identified 1,089 drains for treatment and revival in the forest areas. The project aims to revive 4,28, 827 hectares of groundwater reservoirs within the forestland.

"More than 25 lakh ground-water augmentation and promotion structures will be constructed, within the approved works of the Campa Fund in the year 2019-20 and 2020-21, with a budget of ₹370 crore," said State Forest Minister Mohammad Akbar, reported India Today.

Contributing to the government's current efforts, a unique project that was launched in the 1990s, the 'Gajra Nala' project to recharge water channels and river drains has started yielding results —availability of water to the farmlands throughout the state.

Steps being taken to conserve rainwater and utilise it through rivulets assumes importance since government data highlights that the net irrigated area in the state is 31%, of which around 65% is rain-fed.

Under the 'Gajra Nala' project, the government selected suitable sites with the aid of geographical data for the treatment of drainage lines and watercourses. Additionally, the team members were trained on several technology-based solutions including mobile application, GIS-based survey, and monitoring of natural resource management.

The ambitious-project was being carried out under the supervision of the public health engineering minister of undivided Madhya Pradesh Bhupesh Baghel. After assuming the role of the Chief Minister, he decided to replicate the concept across the state in December 2019.

The initiative enabled 46 villages to access water for their needs, besides preserving groundwater.

The 'Gajra' plan is now being incorporated under the state's flagship program, the 'Narwa-Garuwa-Ghurwa-Baadi'. The name means a collective action to boost water conservation along with livestock development, use of compost, and cultivating fruits and vegetables organically.

'Narwa' (rivulets and streams) focuses on low-cost water conservation structures such as check dams, gully controls, underground dykes at strategic locations on water streams. 'Garuwa' (livestock) refers to the protection and improvement of livestock. 'Ghurwa' (compost) is designed to encourage villagers to produce and use bio-fertilizer with the help of various schemes under agriculture and horticulture. While 'Baadi' is meant to encourage the cultivation of fruits and vegetables in the backyard of village homes.

Reviving the rural economy has been the overall objective of the Narwa project.

Super CM who really doing worth work for cow and for their shelter, Very well Connecting Basics necessities of villages through his Dream Project Narva,Garuva,Ghurwa and Badi.
This project will be Milestone for people of Chhattisgarh and specially for youth who resides in village pic.twitter.com/GYBXXTtz92

"The learning acquired by 'Gajra Nala' has now been replicated for around 36,000 canals, rivulets, and streams across the landscape of the forests. We have chalked out an extensive plan on water forest agenda on rejuvenating groundwater and reviving the water resources in forested terrain," the New Indian Express quoted Rakesh Chaturvedi, state Principal Chief Conservator of Forest (PCCF).

The program involves efforts to revive rivulets and small watercourses in the forest areas including tiger reserves, national parks, and the elephant corridor.

According to reports, the state has around 44% forest cover, which is among the highest in the country in terms of the total geographical area. The ground-level analysis has revealed that due to the degradation of forests, change in the pattern of using land areas, various developmental activities have degraded the water-quality and disturbed the network of streams and water bodies.

"Water availability has a direct impact on the health of forests and their inhabitants. Forested catchments are known to provide substantial propositions of water for domestic, agricultural, industrial and ecological needs," said Chaturvedi.

"During the 2019-2021 plan, the state will construct over 25 lakh structures to facilitate groundwater augmentation in the forest territory with a budget of ₹370 crore from Compensatory Afforestation Fund Management and Planning Authority," said the state Forest Minister.

The government also claims a substantial amount of employment is being created through the Narwa development plan through forest planting and river bank creation.

Reports suggested that forested catchments assume significance for the state which has 80% of households dependent on agriculture where only 43% had arable land under cultivation, out of which 55% of the land has less water retention capacity.

Since December 2019, over 800 streams have been perpetually maintained, covering 4.05 lakh hectares of forested area. By April, another 1,092 water channels would be attended.

Also Read: "This Diwali, Light Lamp For Jawans, Be Vocal For Local While Shopping": PM Modi On Mann Ki Baat