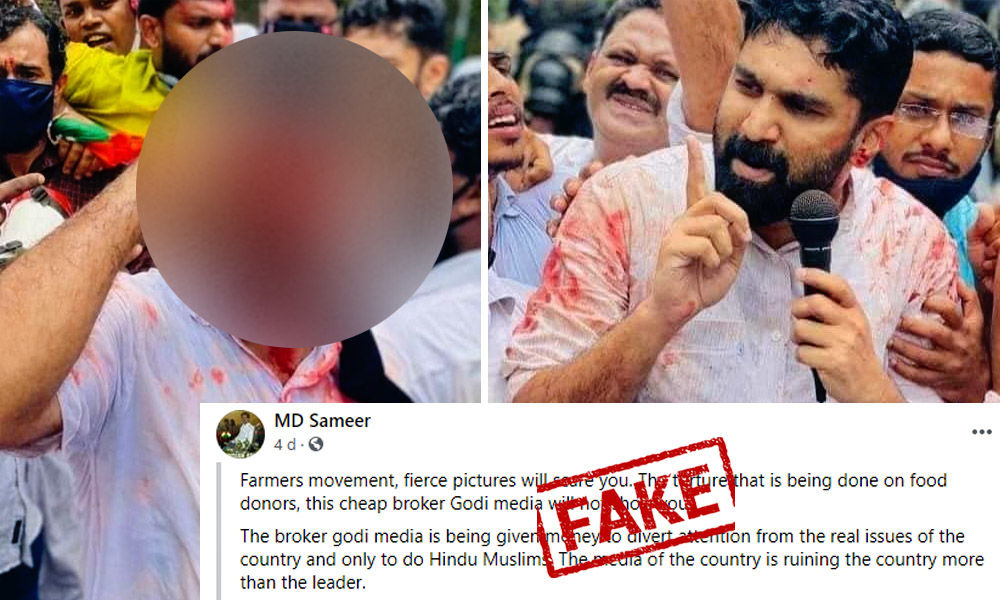 The Logical Indian Fact check team investigates the claim that wounded people seen in the photos got injured during farmers' protests and the news is not being covered by the mainstream media.

A set of photographs showing wounded men is viral on social media with the claim that these are visuals from the recent farmers' protests.

In the latest development, a tractor was set on fire near India Gate on September 28 amid protests by farmers in the national capital against the contentious farm laws. The bills have triggered massive uproar across the country.

Nearly 15 to 20 people had gathered at the central Delhi location on the morning of September 28 and set the tractor on fire.

"Farmers' protests get violent. These images showing brutality against the food producers will frighten you. The sold-out media won't show you the atrocities against the farmers. The media is busy distracting you from the real issues (Translated to English)" reads the caption of one such post.

The claim is false. A reverse image search of the pictures showed that one of the men in the photo is Indian National Congress MLA from Thrithala Assembly Constituency, Kerala.

The official handle of Indian Youth Congress had tweeted a set of pictures on September 18. The viral images were seen in this tweet.

"The Brutal lathicharge on @INCKerala MLA Balram VT and other @IYCKerala workers is highly condemnable. Police resorting to such attacks and injure protestors is deplorable. We demand proper investigation in to the cause of lathi charge and resignation of minister KT. Jaleel," the tweet reads.

The Brutal lathicharge on @INCKerala MLA Balram VT and other @IYCKerala workers is highly condemnable.

Police resorting to such attacks and injure protestors is deplorable.

We demand proper investigation in to the cause of lathi charge and resignation of minister KT.Jaleel. pic.twitter.com/rLQuuRRiDQ

My friend ⁦@VTBALRAM⁩ MLA drenched in blood from brutal beating by KeralaPolice while protesting against the LeftFront Government in Kerala. @INCKerala⁩ ⁦@NSUIKerala⁩ & ⁦@IYCKerala⁩ are bloodied but unbowed. There's got to be a better way to run a democracy. pic.twitter.com/eZ1PNLa0vN

I condemn this cowardly and disgusting
brutal attack on @IYCKerala workers for protesting against LDF Govt's Gold Smuggling.

Have some shame on yourselves!
We won't bow down to Govt sponsored police atrocities. pic.twitter.com/O3uJihkQsg

According to a Hindustan Times report, Kerala's higher education minister KT Jaleel, who has been in the radar for gold smuggling cases, was summoned by the National Investigation Agency (NIA) on September 17.

Protests had sparked across Kerala against Jaleel and demands were made for his resignation. The smuggling case came to light on July 5 after the seizure of 30 kg gold from a diplomatic consignment.

New Indian Express reported on September 17 that many Youth Congress and Yuva Morcha workers which is the youth wing of the Congress and the BJP were injured in the police lathi-charge in several parts of the state.

Another report published on the same day by Indian Express mentions that the police had resorted to using tear gas, water cannons and lathi-charge to disperse the protesters. Reportedly, in Palakkad, Congress MLA VT Balram had sustained injuries during clashes with police.

Below is a comparison of his photo in his Twitter profile (left) and the viral photo (right):

Therefore, unrelated photos from Kerala are being shared with false claims.

The Logical Indian has debunked several such old photos which have been revived with the false claim that these are visuals from the ongoing farmers' protests. The reports can be read here, here and here.