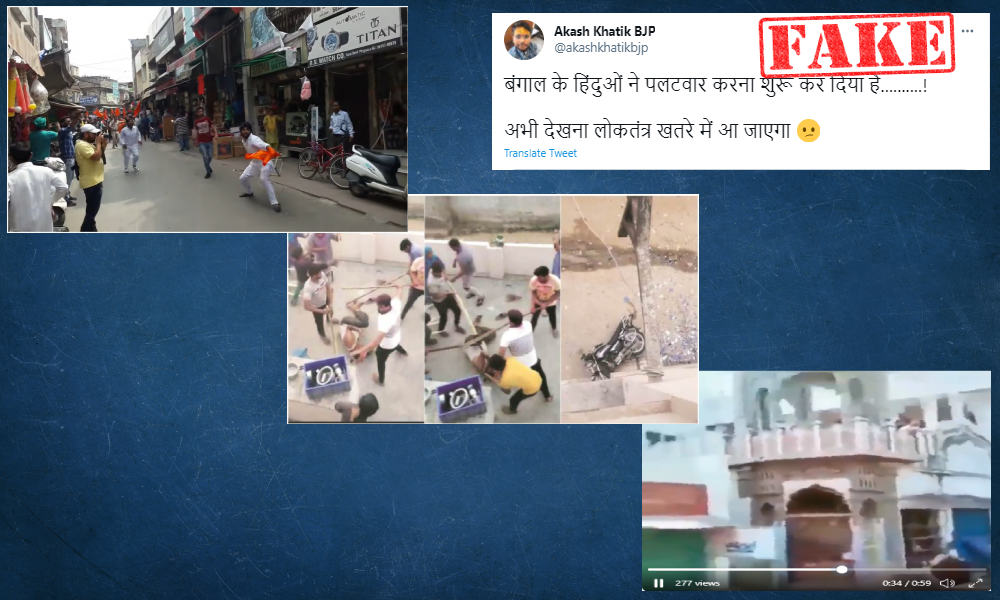 A video compilation of three old videos are being shared on social media to claim that Hindus are retaliating in West Bengal after the post-poll violence. The Logical Indian Fact-Check team found the claim to be fake.

A video compilation has gone viral on social media claiming that Hindus are retaliating to the violence that erupted in West Bengal after the State Assembly results were declared on May 2. Though the post-poll violence in West Bengal was political in nature, BJP leaders have tried to portray it as a Hindu genocide.

The video is being shared with a caption that translates in English as, "The Hindus of Bengal have started retaliating...! Now see Democracy will be in danger."

The Logical Indian found the claim to be fake.

On doing a Google reverse image search, we found a video uploaded by the Facebook page, Aadarsh Vyavastha Nirbhik Samvidhan, on October 12, 2017. The video was shared with the caption, "SHIV SENA VS MUSLIMS IN PHAGWARA".

On comparing the screenshot from the original video and the viral video, we found them to be the same.

Taking a hint from the Facebook post, we did a keyword search and found the incident was reported by The Indian Express on July 23, 2016. The article had screenshots of the viral video, in which a mob with saffron flags can be seen. The article reported that a communal clash occurred in Phagwara, Punjab, where Shiv Sena leaders and Muslims came face-to-face. Shiv Sena targeted local Muslims after a disruption of the Amarnath Yatra in Jammu and Kashmir. Muslims protested against the attitude of Shiv Sena and took out a march under the leadership of Uvais-ur- Rehman, the Shahi Imam of Jama Masjid of Phagwara. The Shiv Sena leaders, too, carried out a protest march led by their state vice-president Inderjit Karwal while raising anti-Pakistan slogans. Both the groups came face to face at Naiyan Wala Chowk and passed comments on each other. This led to a scuffle, and both the communities started pelting stones at each other.

The second clip was uploaded by a Facebook user Mohd Sarfe Alam on June 5, 2015. According to the caption of the video, the incident took place in Karolu village of Uttar Pradesh.

We compared the image of the viral video with the old video and found them to be the same.

While we were not able to independently verify the video, we could easily confirm that the video is old and unrelated to West Bengal violence.

On doing a reverse image search, we found the same video was published by NDTV on March 23, 2019. According to the video, 25-30 men barged into the house of a Muslim family in Gurgaon with rods and sticks. The mob asked the family to "Go to Pakistan".

The incident was also reported by many other media houses, like Indian Express, News 18, etc.

According to the India Today report, the three people Sunil, Dharmesh and Dhirendra, were arrested in connection with the case.

Hence, three old videos were merged together to claim Hindus are now retaliating to the violence that happened in West Bengal.