Recently it was claimed that Russian President, Vladimir Putin has released around 500 lions to make people stay indoors. 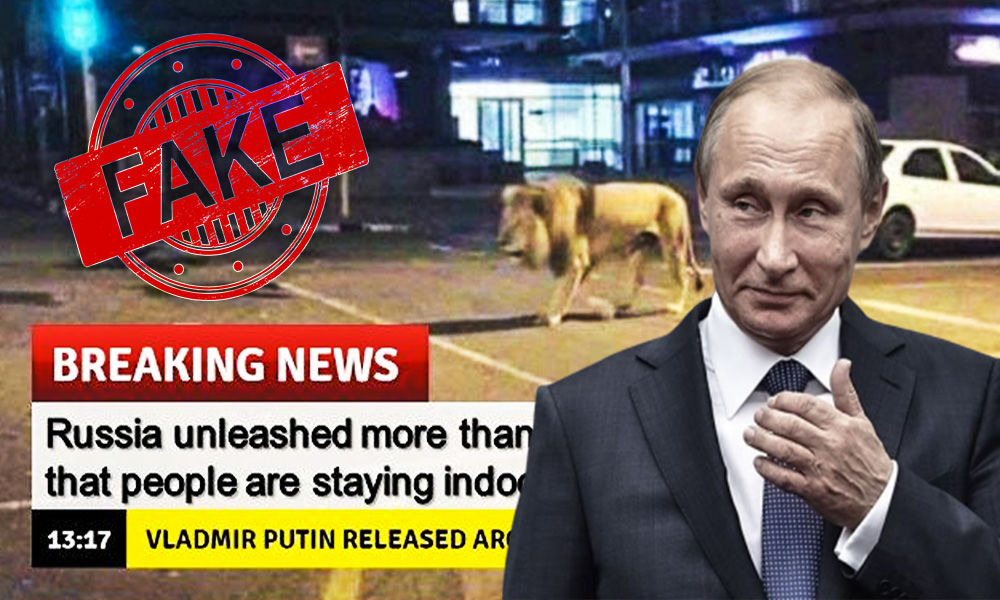 With the COVID-19 virus taking over the world, every country is leaving no stone unturned to protect its citizens.

Recently an image of a lion roaming on the streets was shared with a 'breaking news' screengrab on social media. It was claimed that Russian President, Vladimir Putin has released around 500 lions to make people stay indoors.

The caption accompanying the post reads 'Breaking News: Russia unleashed more than 500 lions on its streets to ensure that people are staying indoors during this pandemic outbreak. Vladimir Putin released around 500 lions to make people stay indoors.'

Interestingly, the image comes with a 'Live' logo and a timestamp making it seem authentic.

Is this a wind up pic.twitter.com/sG4vnfnxAN

Russian president Vladimir Putin released 800 lions and tigers across Russia to devour anyone who comes out. Stay home or die hard. GOAT😅😅😅😂😂 pic.twitter.com/9LXz6DLIf9

Viral Image is from a 2016 film production shoot in Johannesburg, South Africa

On doing a reverse image search of the screengrab, articles dating back to 2016 containing the same image were found. The image is actually of a lion who was filmed by a local film company in Johannesburg, South Africa.

On April 2016, New York Post published an article titled 'A lion named Columbus decided to explore Johannesburg' which talked of an incident from Johannesburg, South Africa, in which the lion called Columbus was borrowed by a local film company from a nearby lion park and had been released on the street as part of the filming.

The Daily Mail also reported on the incident on the same day and mentioned that the incident was from Johannesburg, SA. The viral photo has a logo which reads, 'Break Your Own News', which is an app to create a 'breaking news' template.

Therefore it can be confirmed that Russian President Vladimir Putin did not release 500 lions on the street to enforce a strict COVID-19 lockdown.