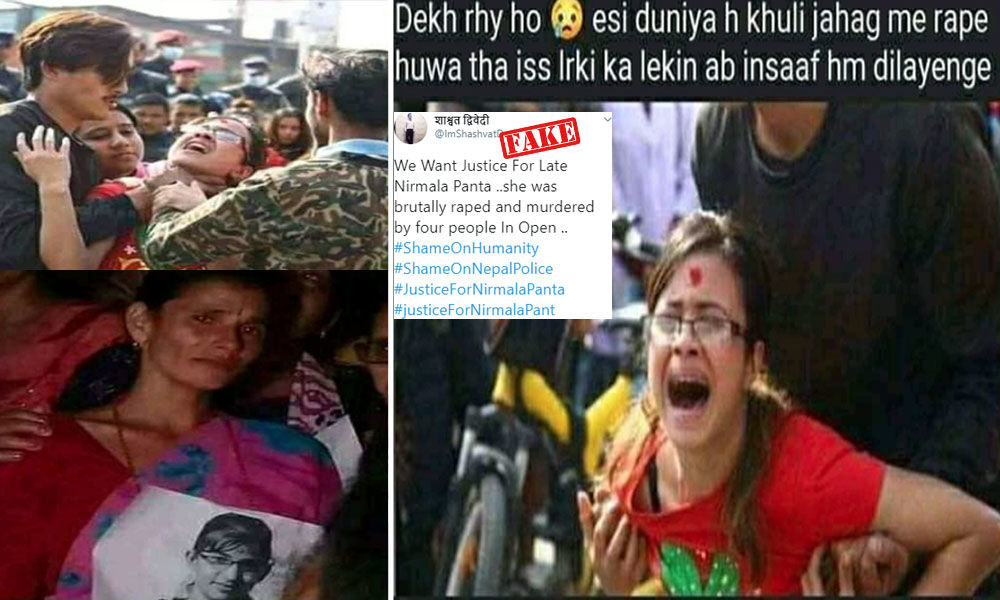 The Logical Indian Fact check team investigates the claim that viral photos show the 13-year-old girl who was raped in Nepal back in 2018.

A two year old news of 13-year-old Nirmala Panta from Kanchanpur district in Nepal being raped and murdered is being circulated because the culprit(s) have not been apprehended yet. Panta had gone to visit her friend Roshani Bam on July 26, 2018 and her body was found in a sugarcane field the next day.

In light of this, a set of pictures is being circulated with the claim that it shows the incident as it happened. The woman in these pictures, according to the viral claims is the 13 year old girl.

Nirmala panta a 13 year old girl from kanchanpur nepal was founded raped and murdered in a sugarcane field near her home on 27 july 2018 #JusticeForNirmalaPanta @arnab5222 @nishd_ikbl @AmanSanyasi @ pic.twitter.com/cSCpBkPYgA

#JusticeForNirmalaPanta
Nirmala Panta, a 13-year-old girl from Kanchanpur, Nepal, was found raped and murdered in a sugarcane field near her home on 27 July 2018.yet no justice.
Share it guys we want justice 💔 pic.twitter.com/ld10s9vYGN

Nowadays,
Binod is trending but no one talking about nirmala panta why ??
This is very shameless for humans.
She was raped in front of many people's but no one comes in the front for helping nirmala.
Share this, trend this and pray for justice.#JusticeForNirmalaPanta#stoprape pic.twitter.com/o5jQkUwNcR

@aajtak ,@ABPNews @AmitShah
SSR ,case is shifted to CBI,and soon SSR will get justice,but
Now It is time to get Justice for Nirmala Panta , a girl brutally raped.This is completely inhuman ,evilic.
Media Pls ,show this news
JUSTICE ,FOR Nirmala.
🙏🙏🙏 pic.twitter.com/IEheeNrRxL

The Logical Indian received a request to verify the claims being made regarding the photos.

Viral photos show the 13 year old girl who was raped in Nepal back in 2018.

The claim is false. The photographs are from an awareness street play made on the incident and the woman in the photos is the actress and not the victim.

A keyword search on youtube led to the video of the street play which was uploaded on december 8, 2018.

The video is titled, "This is how the Nirmala Pant murder case was protested. Street Drama on Nirmala Panta case (Translated to English)"

According to the description of the video, a group called 'Nirmala Pant Nyay Abhiyan' (Justice campaign for Nirmala Panta) had staged a street drama in New Baneshwor, Kathmandu on December 8, 2018 to put pressure on the government.

Other videos of the street play was also found.

Below is a comparison of the viral photo (left) and scenes from the street play (right):

Therefore, the photos does not show the victim. These depict scenes from a steet play based on the incident.