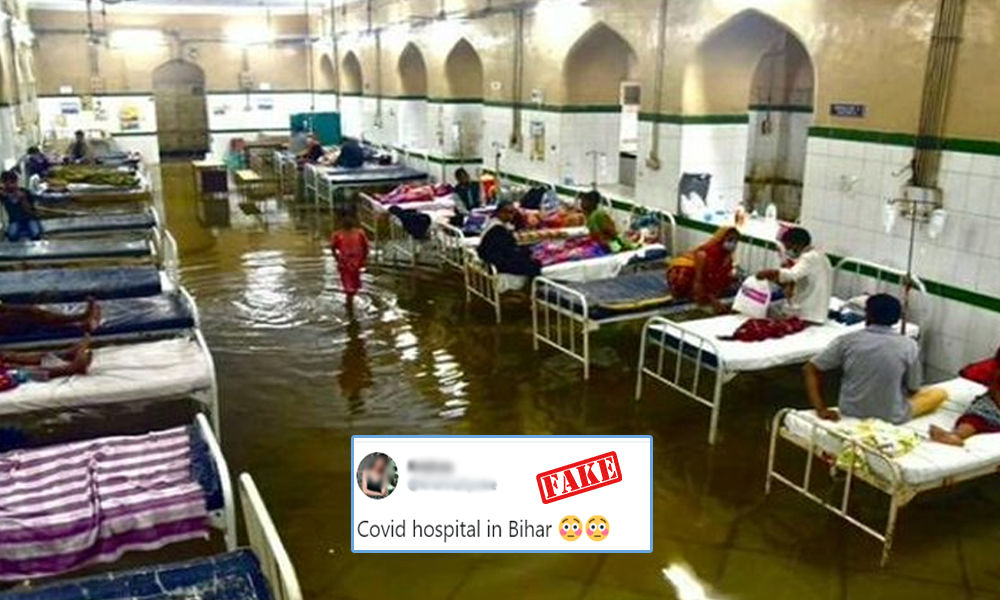 The Logical Indian Fact Check team investigates the claim that a viral photo shows a waterlogged hospital in Bihar.

Amid the COVID-19 crisis, in Bihar's Darbhanga district, villages near the Kamala river got submerged due to the ongoing monsoon rains resulting in a flood. Residents in that area were forced to take shelter elsewhere. At the same time, the state is going through the COVID-19 crisis. The chief officer of the panchayat, Chakko Sada, told The Times Of India that the floodwaters from the Kamala river that flows through Bihar have entered into the villages of about five panchayats in the eastern block of Kusheshwar constituency in the district.

"A population of 55,000 people have been directly affected and over 100 houses in the village have been submerged," he said.

In light of this, a photo showing a waterlogged hospital scene is being shared on social media with the claim that it shows a hospital in Bihar.

The picture shows a waterlogged hospital ward with patients sitting on their beds.

A reverse image search of the photo led to news reports which suggest that the image showed a hospital located in Hyderabad and not in Bihar.

According to a Hindustan Times report, on July 15, Hyderabad witnessed heavy rains which inundated the 110-year old Osmania General Hospital, which had been converted into a COVID facility.

The patients with mild COVID-19 symptoms and also those whose test results are awaited are all housed in the state-run hospital.

The report mentioned that videos and pictures that went viral on social media showed that corridors and wards were inundated and beds were virtually floating in the water. Hospital premises were completely waterlogged.

According to a hospital staff member, the sanitation staff and ward boys had put their best efforts to prevent the flow of water into the wards by placing sandbags and beddings.

Reportedly, a similar situation was witnessed in Osmania hospital on July 13 as well. According to Bharatiya Janata Party MLA from Goshamahal, under whose jurisdiction the hospital falls, the entire hospital was flooded with rainwater and the drainage system was overflowing.

"Six wards, including an ICU, all of which are on the ground floor, were flooded, forcing patients to take refuge on their beds," Singh said while appealing to the Chief Minister K Chandrasekhar Rao and Health Minister Etela Rajender to look into the matter.

Osmania General Hospital flooded due to drainage system failure, in Hyderabad, on Wednesday.

Public Representatives Tweeted On The Matter

This is the state of Osmania Govt Hospital now!! Corona Pandemic sweeping the city and look at waterlogging in one of the most well-known government hospitals in the heart of Hyderabad!! Reflecting the abysmal standards of KCR Administration.#KCRFailedTelangana pic.twitter.com/aOMconTpCc

Further photos of the waterlogged Osmania Govt Hospital because of mild rains in Hyderabad today. Corona Pandemic ravaging Hyderabad and this is the state of the biggest Government hospital in Telangana!! What a shame!#OsmaniaHospital#KCRFailedTelangana pic.twitter.com/8nfFc9BlCT

"Madam, See the horrible situation in Osmania General Hospital since yesterday it is overflowing with rainwater, Req you to kindly visit the hospital and take stock of the situation," he wrote requesting to the Governor of Telangana.

Bihar has been fighting twin battles, containing the coronavirus outbreak on one hand, and the incessant rains that have been wreaking havoc on the other, adding to the woes.

Staring an unprecedented rise in the number of COVID-19 cases, the Bihar government decided to impose a lockdown till July 31.

Announcing the decision, Bihar Deputy CM Sushil Kumar Modi said, "Lockdown to be imposed in the state from 16 to 31 July to curb the spread of COVID-19. Guidelines are being prepared."

Amid the state's rising number of infections which has breached the 20,000-mark, an incident from Bihar's Supaul district has highlighted the sorry state of the medical infrastructure. In a viral video, a young doctor can be seen sitting on a plastic chair which is placed on the back of a green cycle-cart as it marches through knee-high water.

Sorry state of #COVID19 affairs in the state of #Bihar ... doctors are having to travel in and out of #COVID__19 speciality hospitals on a thela. Same goes with patients. Listen to Dr Amarinder Kumar. #coronavirus pic.twitter.com/RwXep3nq6M

According to reports, the doctors at the COVID-19 care facility in the district have been relying on such cycle-carts to reach the medical facility where the coronavirus patients are being treated.

Heavy rains have caused waterlogging in the area. Dr Amarindar Kumar, who works at a COVID-19 speciality hospital told India TV, "We currently have two COVID-19 positive patients. Because the area is flooded with water, the patients are treated on the first floor, we have to travel in and out of the hospital on thelas."

"Even patients, when they are supposed to be taken in or out, are taken through the thelas" he added.

The doctor also informed that this has been the situation for the last two-three days. Since the patients require continuous medical attention, the doctor said they are resorting to such desperate measures.