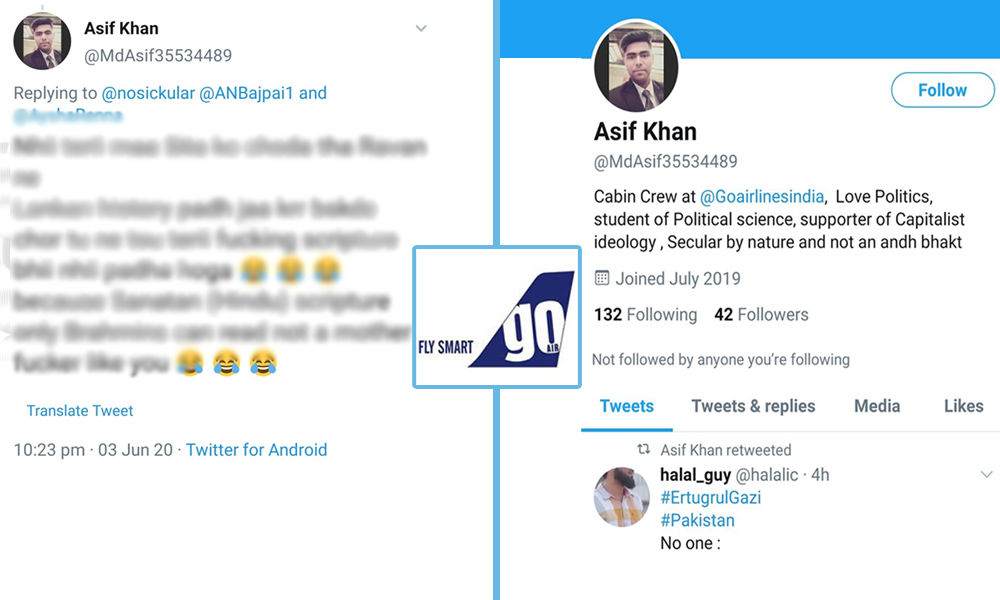 A trainee pilot with the airline GoAir was fired on June 4, after he was alleged on Twitter that he tweeted offensive comments regarding Goddess Sita and Hinduism.

Below are screenshots from a Twitter user, Asif Khan with the Twitter handle '@MohdAsif35534489' that went viral on June 4. The account is currently unavailable on the microblogging site.

"Dear @goairlinesindia, what kind of shit head you have hired? Do you endorse such derogatory remarks of your employee? Guys, RT it until he gets fired," reads the caption of one such post. At the times of writing this report, the tweet had garnered over 7,000 retweets.

Please clarify if Asif Khan @MdAsif35534489 is really your employee as his twitter bio states. If he is and you do not fire him for this unpardonable public conduct, it will mean that you are complicit in encouraging such hatred against the Hindu religion. pic.twitter.com/mtCKdxyvSS

The incident also led to the hashtag #BoycottGoAir trending in India. Outraged netizens tagged the airline's official Twitter and demanded action against the person.

Responding to the backlash, GoAir first tweeted that they are looking into the matter. They added that they are also investigating if the said person is their employee or not.

Later that day, the airlines in another tweet announced the immediate termination of the employment contract of a trainee pilot named Asif Khan.

GoAir employee, Asif Iqbal Khan, whose employment contract was terminated due to the viral tweets, posted on Facebook and said that he was falsely targeted.

Khan explained the event leading to his termination. He said, "On June 4, 2020, at around 3 pm I got a couple of call by my senior captains from GoAir enquiring about my Twitter account. I thought that something is amiss so I searched on twitter and found that Boycottgoair is trending because some person with same name as mine and his profile stating that he works as cabin crew with go air had abused Hindu Gods. But looking at his picture one can clearly see it's someone different and not me."

"I have been getting death threats, abusive hate messages, my mother and sister threatened with rape, all because of mistaken identity and because a guy with the same name as mine had abused Holy Hindu God's," he wrote. "The profile of @MohdAsif35534489 said he was a member of GoAir's cabin crew, which led to a misunderstanding and action was taken against me," said Khan.

Below is the photo of the Twitter user Asif Khan taken from the viral tweets:

It is clear from the comparison that these are two separate individuals.

"My brother got a YouTube link sent by his friend who works at go air as cabin crew asking if he knows the person in the video and she asked him because she saw that video and saw my brother as my mutual friend on Facebook. I then realised how huge this matter is," Khan wrote.

"In the YouTube video which was put by a channel named 'Buzzing Trends Official' the person tried to blame me for this disgusting act and to prove his point he stole photos of mine from my Facebook account and had put it in his video, but that didn't prove anything as he had also put the profile of the fake twitter account, the impostor and on comparing the face and both the accounts again it clearly showed that it's different person and not me," he added.

"Me and my family pointed this out in the comment section of that video and after realising his mistake the channel owner took the video down," he further said.

Reportedly, the Youtube video has now been taken down.

"We made a video on #BoycottGoAir and there was incorrect information about Asif Khan. As soon as we realised our mistake, we have taken the video down and apologized to their family," reads the description of the video.

Reportedly, GoAir revoked the termination order, however, the pilot is currently suspended subject to cyber cell investigation. His FIR will be taken up in a Mumbai court on June 8.