Tendered Votes Are Not Counted During Normal Counting Process

Several Facebook users are sharing posts citing few sections of electoral conduct rules. These posts are currently going viral across all social media platforms . Let's try to analyze the claims made in these posts. 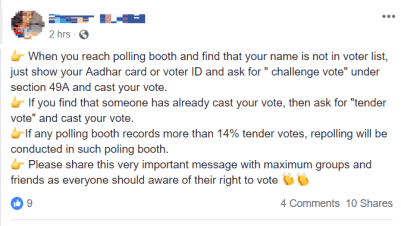 The archived version of the post can be seen here.

All the rules pertaining to voting are available in the manual on 'THE CONDUCT OF ELECTIONS RULES, 1961'. The Conduct of Election (Amendment) Rules, 2013 can also be accessed from the ECI website. One can search for 49A and observe that this section deals with the Design of EVM and does not provide any information about challenging your vote if the person's name is not in the voter list.

The Handbook for Presiding Officers mentions about Challenged Vote. Challenged vote is where the polling agents challenge the identity of an elector and the presiding officer will hold an inquiry into the challenge.

So a person cannot vote if his name is not in the electoral roll except in a few cases which can be found in the Handbook for Presiding Officers. Hence the claim about Challenge Vote and 49A section is False. 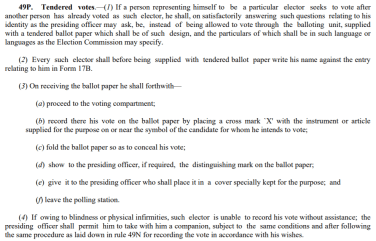 Section 49P of THE CONDUCT OF ELECTIONS RULES, 1961 mention that a person whose vote has already been cast by another person may be asked to cast his vote through tendered ballot paper after satisfactorily answering few questions by the presiding officer, but not through the balloting unit. Hence the claim about casting vote through Tendered Vote is True.