One of the posts says, "Why does Congress hate Hindus so much? According to me, all these jihadis are grandsons of Aurangzeb. Anti-Hindu Gehlot government". However, the 200-yr-old temple was demolished during the Vasundhara Raje led BJP government in Rajasthan for a Metro project.

A few days back in Rajasthan's Alwar, the municipality bulldozed three temples. During this anti-encroachment drive, a 300-year-old temple was also demolished after which the political tussle started between Congress and the Bharatiya Janata Party. Amidst all of this, an image of JCB and a crane machine demolishing a temple is going viral on social media. While sharing this image, people on social media claimed that the viral image is of Alwar where the "anti-Hindu" Gehlot government demolished the temples in the country of Hindus.

[English Translation: Shivling was uprooted with a drill and thrown away, Shiva temple was demolished by bulldozer, This has not happened in Pakistan or Bangladesh, but in Alwar, Rajasthan in India.]

[English Translation: Why does Congress hate Hindus so much? According to me, all these jihadis are grandsons of Aurangzeb. Anti-Hindu Gehlot government.]

[English Translation: Deities are broken, in the country of Hindus! Ghaznavi is back, disguised as Gehlot.]

The Logical Indian Fact Check team verified the viral claim and found it to be false. The viral image is 7 years old.

During the initial investigation, we conducted a reverse image search of the viral image which lead us to a report of Aaj Tak dated 14 June 2015. The title of the report reads in Hindi, "जयपुर मेट्रो के विस्तार की खातिर ढहा दिए 200 साल पुराने मंदिर. [English Translation: 200 years old temple demolished for the expansion of Jaipur Metro.] According to the report, the viral photo was taken in Jaipur in 2015 when about a 200-year-old temple was demolished for a metro project in Jaipur. Metro work was getting interrupted due to the Rozgareshwar Mahadev and Kashharan Mahadev temples of Jaipur. Jaipur Metro officials said that they had sent notice before demolishing the temple so that the idols and items of the temple could be shifted to the right place in time. 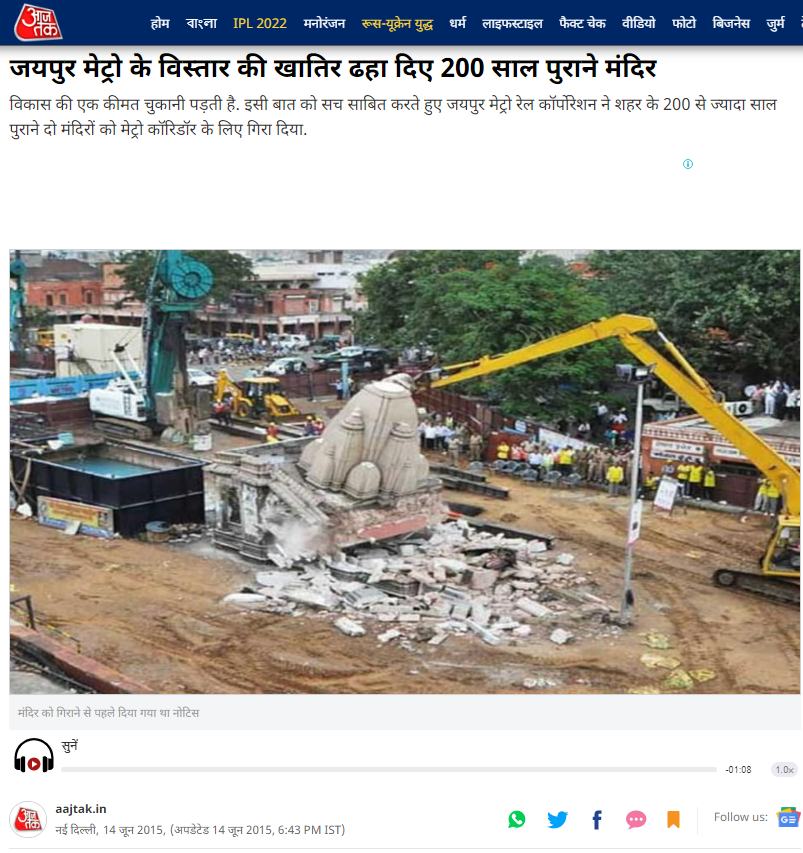 According to the report of Amaj Ujala dated 23 July 2015, the Rozgareshwar Mahadev Temple was demolished due to obstruction in the Jaipur Metro Corridor. At that time the Rashtriya Swayamsevak Sangh (RSS) and locals had also expressed displeasure at the Rajasthan government for the demolition of temples. The police arrested 12 people who were provoking common people during the demolition of the temple. After the protest by Hindu organisations, the Rajasthan government at that time took the decision to rebuild a total of 22 temples including the Rojgareshwar temple. It is worth noting that in 2015, there was a BJP government in Rajasthan and the CM was Vasundhara Raje.

Our investigation shows that the viral image of temple demolition is almost 7 years old. The temple was demolished during the Vasundhara Raje let BJP government in Rajasthan for the Metro project. It has nothing to do with the Ashok Gehlot government. Hence, the viral claim is false.

Also Read: This Exclusive Report Of TV9 Bharatvarsh On Srilanka's Hambantota Port Is Fictitious And Fabricated; Know Why!