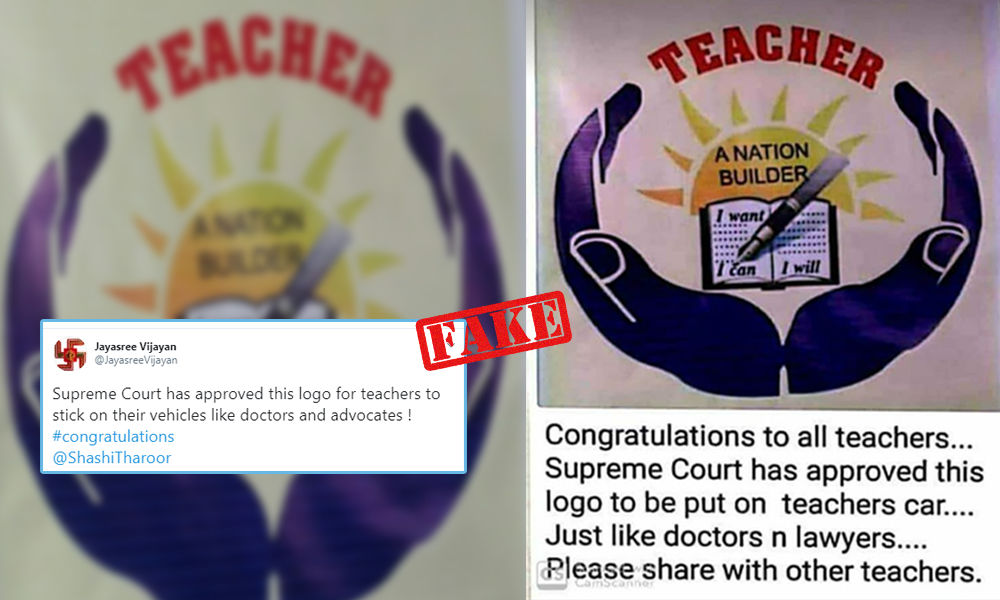 Fact Check: Did The Supreme Court Approve A Logo For Teachers?

The Logical Indian Fact Check team investigates the claim that the Supreme court has approved a new logo for teachers to put on their car.

A picture of apparently a logo is being circulated in WhatsApp with the claim that it is the new logo for teachers to put on their car as Doctors and Lawyers do. It is also being said that the Supreme court has approved this logo.

The logo shows two palms around a book and a pen in the centre – with the text "I want, I can, I will."

Supreme Court has approved this logo for teachers to stick on their vehicles like doctors and advocates ! #congratulations @ShashiTharoor pic.twitter.com/32UsiZBbyi

Supreme Court accepted this logo for teachers to put on their vehicles pic.twitter.com/fGqpOLJ0ss

#SC has Approved a logo for the teachers to put on their vehicles.#Honour. pic.twitter.com/38mOeUjehT

Congratulations to all teachers, find this new approved Logo for teachers like ant other logos of Doctors or Lawyers. Ptoudly you can stick this logo on your vehicles with a caption of a nation builder. Be proud to be a teacher as usual. pic.twitter.com/1rg4oDiBRV

The Logical Indian received multiple requests to verify the logo.

Supreme court has approved a new logo for teachers to put on their car.

The logo has been going viral since the last couple of years.

The logo was originally designed by Rajesh Khanna, a principal of a government school in Ludhiana's Jagraon town, in September 2017, on the occasion of Teacher's Day.

"There has been no directive from SC of this sort, at least none that I know of. We are currently in the process of getting it approved as a trademark. However, the news of the SC approving this symbol is false," the Quint quoted Khanna as saying 2 years ago.

Below is a screenshot of his Facebook page where he states that the logo was created him:

Other photographs from the event can be accessed here.