Fact Check: Have Deposits By Indians In Swiss Banks Decreased?

In June this year, media reported that the deposits by Indians in Swiss Banks have increased by over 50% in 2017. This was apparently based on the official annual data released by the Swiss National Bank (SNB). But on 24 July 2018, the Swiss embassy released a press statement stating the following.

“The figures published by the SNB are regularly mentioned in the public domain as a reliable indicator of the amount of assets held with Swiss financial institutions in respect of Indian residents. More often than not, the reports have not taken account of the way the figures have to be interpreted, which has resulted in misleading analyses. Moreover, it is frequently assumed that any assets held by Indian residents in Switzerland are undeclared (so-called ‘Black Money’).

However, the cited figures that show an increase of 50% in Swiss banks’ total liabilities towards India also include non-deposit liabilities as well as business of Swiss branches located in India.

To analyze Indian residents’ deposits held in Switzerland, another data source should be used. This is the so-called “locational banking statistics”, which the SNB collects in collaboration with the Bank for International Settlements (BIS). This data source shows that the liabilities in the form of loans and deposits of Swiss-domiciled banks towards Indian non-banks decreased by 44% between 2016 and 2017.”

In other words, the Swiss embassy made it clear that the figures released by the SNB may not be right ones to understand deposits of Indian residents in Swiss financial institutions. It states that the ‘locational banking statistics’, collected in collaboration with the Bank for International Settlements (BIS) should be used to analyse deposits of Indians in Swiss banks.

What are Locational Banking Statistics?

The ‘locational banking statistics’ are released quarterly by the Bank for International Settlements (BIS). The BIS is owned by 60 central banks representing countries around the world. The Reserve Bank of India (RBI), SNB and other major central banks are members of BIS.

What is the government claiming? 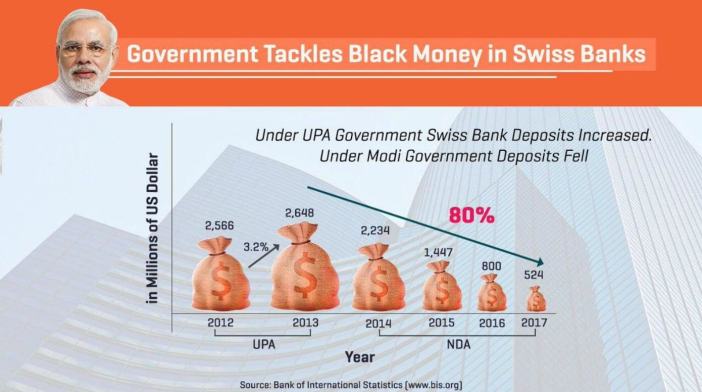 Have deposits by Indians in Swiss banks decreased? 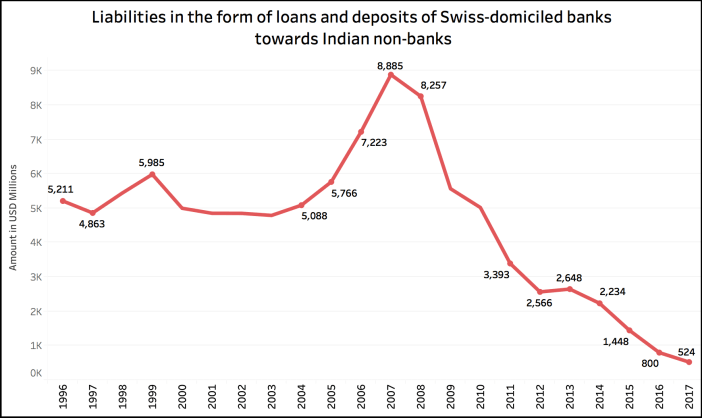 Are these liabilities ‘Black Money’?

Automatic exchange of information (AEOI) in tax matters between Switzerland & India has come into force from 1 January 2018. The Indian authorities will receive detailed information of all Indian residents that maintain an account in Swiss financial institutions starting September 2019. It cannot be concluded if all of this is black or unaccounted money. The legal foundations for introducing the AEOI came into force on 1 January 2017 in Switzerland. To date, Switzerland has activated AEOI with 38 different countries including India.

What about other Countries?

If one looks at the data on liabilities for other countries, it follows a similar decreasing trend though not on the same scale as India. Between 2014 & 2017, the liabilities towards non-banks in Brazil decreased by 43% and towards non-banks in Pakistan decreased by 42%. The decreasing trend is seen in most of the countries following the global financial crisis in 2008. In the case of Russia, where the liabilities increased even after 2008 to reach a peak in 2012, a 29% decrease was observed between 2014 & 2017. The decrease in India’s case doesn’t seem to be isolated. 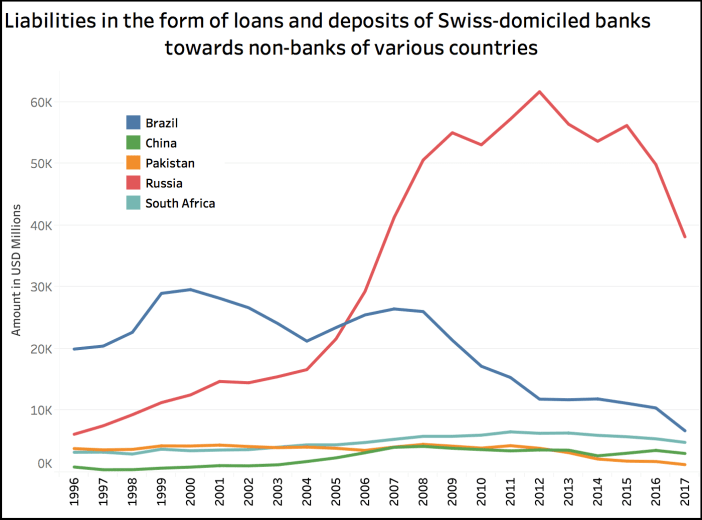