The Logical Indian Fact check team investigates the claim that Sushant Singh Rajput posted a set of tweets a few hours before his death and subsequently deleted.

Actor Sushant Singh Rajput allegedly died of suicide at his residence in Mumbai on Sunday, June 14. The 34-year-old's sudden and unexpected death has come as a shock to the country.

Soon after the news of his death surfaced, netizens took to social media to express their sorrow. Social media was flooded by his industry colleagues, politicians, sportspersons and the actor's fans expressing grief at his unfortunate demise.

Amid this, a set of screenshots of apparently his last tweets are doing the rounds. The viral posts claim that these tweets were allegedly posted a few hours before his death, and subsequently deleted them. He talked about his mental health and why he is ending his life thorough his tweets. "I fought back hard with life. I will be deleting these tweets in a while so just some of you know that I'm done with this mediocre success. I don't want fame anymore. Its all so peaceful yet so disturbing to handle," says these apparent tweets from the late actor.

"We men are not asked about our health, our mental state, our lives, our thoughts. We are not treated that way. I know I have been through a lot lately. I have been tired of trying so hard. Its been a long journey with you people. I don't know why I am tweeting this," reads the second graphic.

"I'm ending all this for good. Going far yet so close to you people. Maybe after this people try to communicate with others rather than holding onto the thoughts. See ya at the other side. Goodbye," image of the third 'tweet' read.

The tweets were carried by several media portals as well. The Logical Indian received a request for authentication of these screenshots on its WhatsApp fact-check number. Sushant Singh Rajput posted a set of tweets a few hours before his death and subsequently deleted them. Below is a comparison of the viral screenshots (top) and a screenshot of one of his original tweet (bottom): 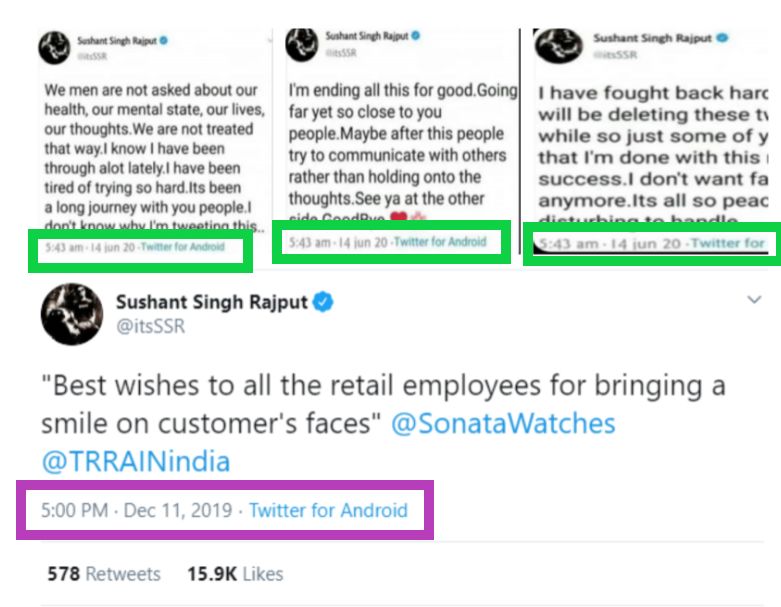 In the original tweet, the time stamp reads 'AM' whereas in the viral screenshots it says'am'.

Further, the original date reads June with the small letter 'j'. In the original one, it can be seen that the name of the month starts with a capital letter.

It is noteworthy to mention that despite not being a part of a tweet thread, the viral screenshots all bear the exact timestamps.

Replies Of The Viral Tweets Do Not Exist

On searching for replies to the viral tweets, the microblogging sites doesn't show any results.

Usually on typing 'to:(twitter handle)' in the search bar, it gives out a list of replies to any tweet of a particular handle, even if the tweets have been deleted.

However, a search for the late actor's Twitter account did not show any replies to these three tweets.

Samina Shaikh, a journalist wrote that Twitter has clarified that the tweets are fake and fabricated.

All the tweets from @itsSSR's Twitter before his death are fake & fabricated - @TwitterIndia has clarified on the same, kindly don't believe in these tweets and don't pass it further...Let him please rest in peace! Please, I beg! 🙏🏻 pic.twitter.com/w6pjNEkyFd