A claim that Sudhir Chaudhary was attacked by an enraged crowd is going viral on social media.

Zee News anchor Sudhir Chaudhary has said that the Delhi people are busy in their own lives who prefer to discuss national issues only over drinks and cast vote only for freebies.

In his daily prime time show 'DNA', Chaudhary went on a rant as the poll of exit polls suggested a sweeping victory for the Aam Aadmi Party (AAP) in 2020 Delhi elections.

He lashed out at Delhi voters for not caring about issues like the Balakot airstrikes, Ram Temple in Ayodhya, or revocation of Article 370 in Jammu and Kashmir.

His rant earned him flak from Twitterati.

Following this, posts claiming that 'An enraged crowd attacked Zee News officer for terming the people of Delhi freeloaders and traitors' went viral on social media. On doing a reverse search on both the images, it was found that the two images belonged to two isolated incidents from a different time.

The first image which shows an injured Chaudhary is actually from July 2019. 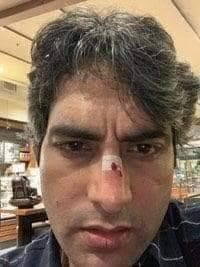 In an article published by Samachar, it has been reported that on being asked about his sudden absence from his show DNA, the anchor in a Facebook post informed his fans that he had an accident during his visit to Mumbai and doctors have advised him to rest.

Chaudhary also shared the news of his nose injury which included a minor fracture.

The second image dates back to December 2017. The report said that some people with poles in hand vandalized the Congress headquarters in Mumbai.

Computers, tables, chairs, mirrors and other belongings kept in the office were broken.

Therefore, Given the evidence, It can be confirmed that Both the Zee News Editor-in-chief and the Zee News Office were not attacked by a crowd.