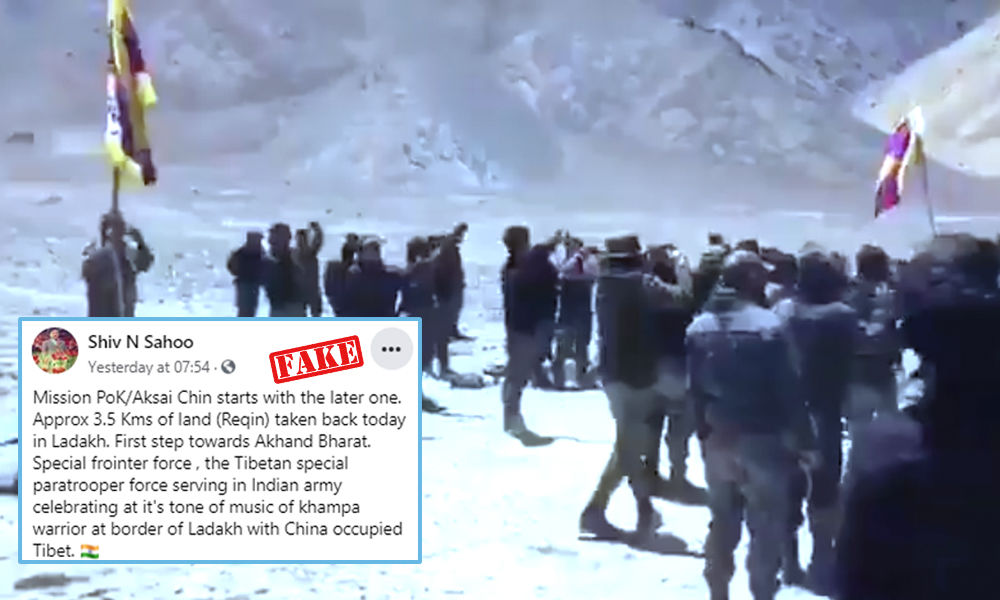 The Logical Indian Fact check team investigates the claim that Video shows the Special Frontier Force celebrating after the recent skirmish with the Chinese troops at the Indo-China border in Ladakh.

A video of a group of army personnel dancing is being circulated on social media with that claim that it shows the Special Frontier Force celebrating after reclaiming the land under Chinese occupation in Ladakh.

"Mission PoK/Aksai Chin starts with the later one. Approx 3.5 Kms of land (Reqin) taken back today in Ladakh. First step towards Akhand Bharat. Special frointer force, the Tibetan special paratrooper force serving in Indian army celebrating at it's tone of music of khampa warrior at border of Ladakh with China occupied Tibet," reads the caption of one such post.

#Tibetans#FreeTibet
Special Frontier Force [SFF] - Tibet's Army unit, referred to as Vikas Battalion, has been instrumental in occupying some key heights on the Line of Actual Control (LAC) with China in Ladakh to thwart any occupation by the Chinese troops @SFTHQ pic.twitter.com/TwUH4JNI06

On the territory in Tibet with National Flag, Army Tibetan well placed

We are so proud of the Tibetan armies

Video shows the Special Frontier Force celebrating after the recent skirmish with the Chinese troops at the Indo-China border in Ladakh.

A Tibetan flag can be seen in the viral video.

A keyword search on YouTube led to the same video on Youtube which was uploaded on 27 August, 2020.

Further, tweets and Facebook posts sharing the video on August 27, were also found.

#Tibet Army is there.
TIBET WILL BE FREE ! pic.twitter.com/X2UtUv9l5N

#Tibet Army is there.
TIBET WILL BE FREE ! pic.twitter.com/2cIPGGGxUl

According to an update by the Ministry of Defence, the Indian troops blocked the intrusion of People Liberation Army (PLA) of China in Eastern Ladakh on the night of 29-30 August, 2020.

Therefore, the video has been on the internet from before and it can definitely not be related to the recent skirmish at the border.

Reportedly, the Indian Army on August 31 said that Chinese troops "carried out provocative military movements to change the status quo" near Pangong Tso lake on the night of August 29/30 but they were blocked and thwarted by Indian Army soldiers.

The incident took place on the south bank of the Pangong Tso. The fresh flare-up comes amid ongoing talks to disengage and de-escalate tensions between India and China to resolve the four-month-long standoff in eastern Ladakh.

"On the Night of 29/30 August 2020, PLA troops violated the previous consensus arrived at during military and diplomatic engagements during the ongoing standoff in Eastern Ladakh and carried out provocative military movements to change the status quo," the Indian Army said in its statement.