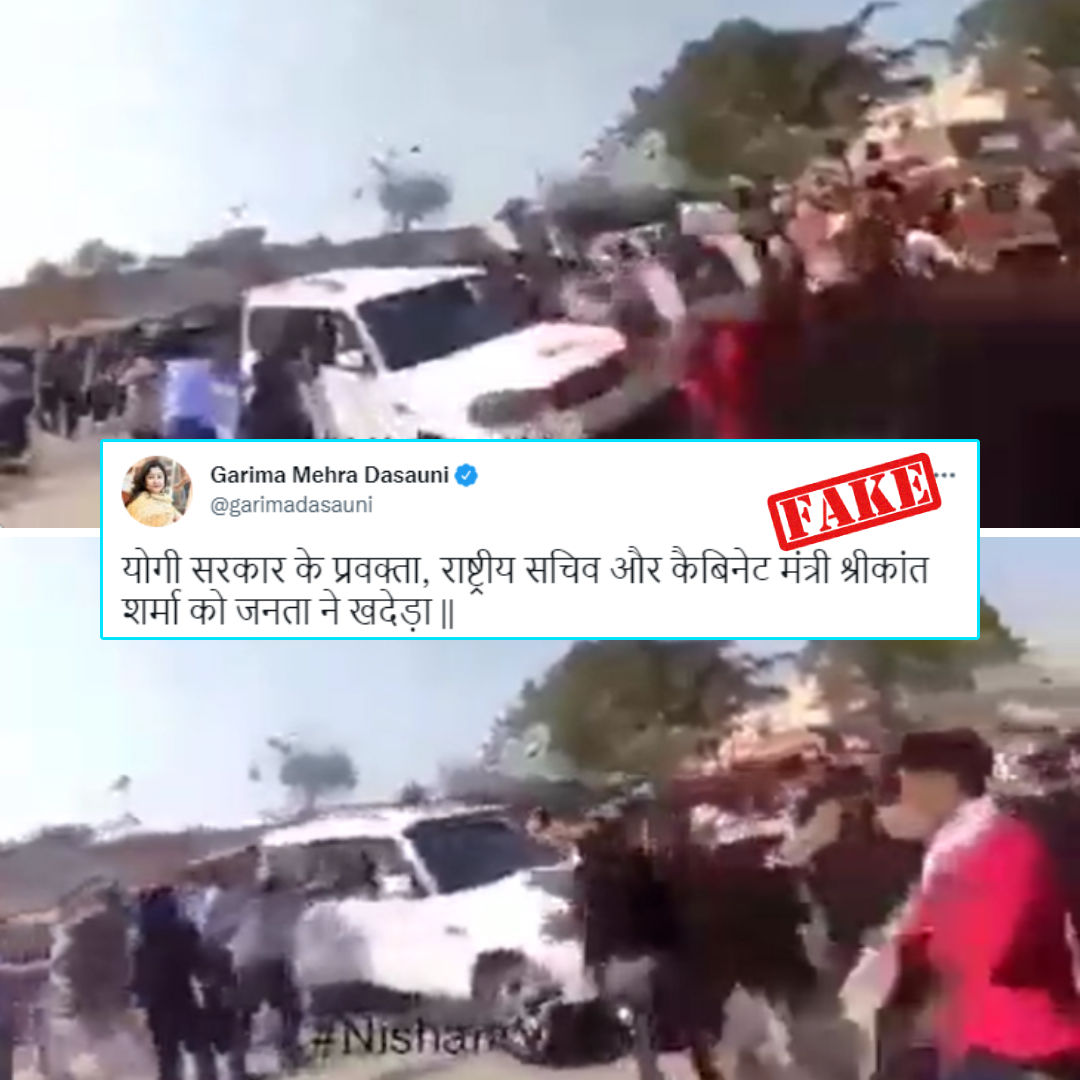 A video of protestors attacking a car is viral with a claim that the public chased the Yogi government's spokesperson and cabinet minister Shrikant Sharma.

Amidst the ongoing election campaigns, a lot of misinformation is being circulated, especially in Uttar Pradesh.

A 26-second-video of a crowd surrounding a car and later attacking it is viral on social media. While sharing the viral video, social media users are claiming that Shrikant Sharma, cabinet minister in Uttar Pradesh government, was chased by the public.

UP BJP leader and cabinet minister Shrikant Sharma was chased away by public.

The Logical Indian Fact Check team verified the claim and found it misleading as the viral video is of the attack in Jharkhand on Former Koderma MP and ex-state president of the BJP party Ravindra Rai.

We extracted different keyframes from the viral video using the InVid tool and conducted a Google reverse image search. It led us to the same video uploaded on January 30 2022, on 22Scope, a YouTube channel. The video was titled, "Ex BJP MP Ravindra Rai attacked. Driver steers vehicle out of danger."

We continued our search on YouTube using the relevant keywords. It led us to a channel of Samachar Plus-Jharkhand, Bihar, which uploaded the clearer and more extended version of the video on January 31 2022. The video was titled in Hindi, "कोडरमा के पूर्व सांसद रविंद्र राय की गाड़ी पर हमला, भाषा विवाद को लेकर युवाओं ने रोकी गाड़ी".

Taking a hint from here, we conducted a Google search using relevant keywords. We came across some media reports that covered the attack on former Koderma MP Ravindra Rai's car.

The Times of India reported that the incident took place on January 30, when former Koderma MP and ex-state president of the BJP party, Ravindra Rai's vehicle was attacked by protestors near Telmachcho bridge in Bokaro. They were protesting against the state's new recruitment policy, which excluded the Bhojpuri and Magahi from the regional language list.

TOI quoted Rai saying, "I was not aware about the protests here and was going towards Dhanbad for a meeting. Protestors stopped my car and attacked all of a sudden." Rai accused the state government of the breakdown in law and order.

IANS News Agency covered the incident in Hindi. It reported that excluding the Bhojpuri and Magahi languages from Jharkhand Staff Selection Commission (USSSC) examinations has resulted in violent protests. Ekta Vikas Manch in Jharkhand has been demanding the inclusion of both languages in examinations for a long time. In August 2021, it also announced filing a PIL in High Court concerning the demand.

According to reports, amid these ongoing protests, Rai was travelling from Ranchi to Dhanbad when he was attacked in the Chas Mufassil police station area. His bodyguard was treated indecently while the driver was maltreated, and the vehicle was damaged. Rai escaped and took shelter in the police station.

Other media outlets such as TV9 Bharatvarsh and News 18 covered the incident.

Evidently, a video of the attack in Jharkhand on Former Koderma MP and ex-state president of the BJP party Ravindra Rai is viral with a misleading claim that the public chased the vehicle of Uttar Pradesh cabinet minister Shrikant Sharma.