A screenshot of a tweet apparently by BJP national spokesperson Sambit Patra is doing the rounds on social media platforms.

"I am watching Ertugrul nowadays & I see narendra modi has similar leadership qualities as Ertugrul .His Strong belief in God, his Courage to not give up, His conviction to Stand on his principles even when everyone is against him. @narendramodi," reads the tweet. 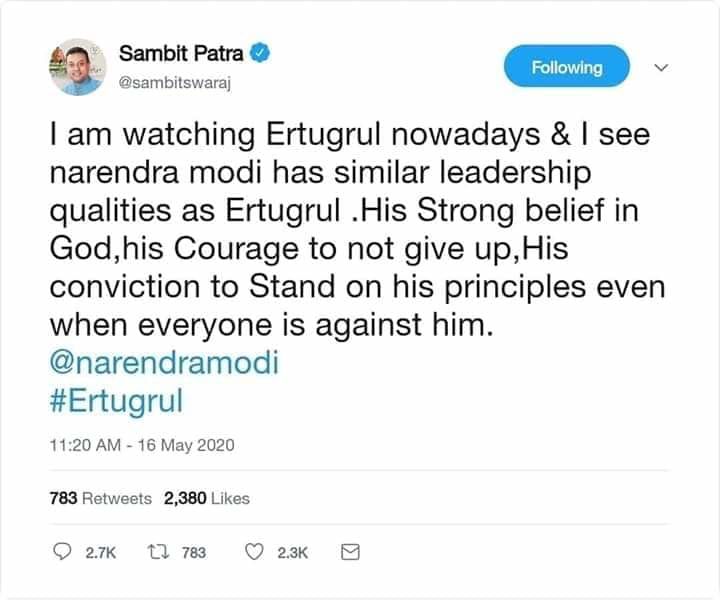 @sambitswaraj ok then do another thing same like a Ertugrul "Circumcision" and this suggestion for u also #Ertugrul pic.twitter.com/PlYf4LrN78

Glad to see Ertuğrul's influence started manifesting in life of @BJP4India leaders as well. Dear @sambitswaraj,the founding element of the Ottoman Empire was tolerance & justice as Muslims,Jews, Christians lived together for centuries without any problem.@narendramodi#Ertugrul pic.twitter.com/3FtNEE3tqE

Good you are watching Dirilis Ertugrul,you must watch Kurlus Osman too @sambitswaraj and reccommend both the serials to your collegues in RSS/BJP.
You guys should also read Quran with tafseer,history of Islam and study life of Prophet Mohammad,PBUH,too.
May be Allah forgives you. pic.twitter.com/OtxVLME454

The claim is false. No such tweet by Sambit Patra was found on the date mentioned in the viral screenshot.

Below is a comparison of the viral screenshot (left) and a screenshot of one of Patra's original tweet (right):

In the viral screenshot, the date and time stamp are separated by a hyphen. However, usually, a dot is placed before and after the date stamp.

It is noteworthy to mention that despite not being a part of a tweet thread, all the viral screenshots bear the exact timestamps.

Replies Of The Viral Tweets Do Not Exist

On searching for replies to the viral tweets, the microblogging sites doesn't show any results. Usually on typing 'to:(twitter handle)' in the search bar, it gives out a list of replies to any tweet of a particular handle, even if the tweets have been deleted.

The 'following' button usually appears on the right-hand side of a tweet. The user's bio is seen under the following button.

Below is a screenshot of how it appears on Twitter:

Ertugrul, a 13th-century Turkish warrior, belonged to the nomadic Muslim Oghuz tribe Kayi, and was father of Osman I, the founder of the Ottoman empire.

Ertugrul had established a principality centred at Sögüt.

With Sögüt as their base, Osman and the Muslim frontier warriors (Ghazis) under his command waged a slow and stubborn conflict against the Byzantines, who sought to defend their territories in the hinterland of the Asiatic shore opposite Constantinople (now Istanbul).

Historical series 'Resurrection: Ertugrul' is based on Turkish history during the Christian Crusades in Europe and the Middle-East in the early half of the previous millennium.

The show goes back to a time when Aleppo in Syria was a 'cultural and economic hub when expansionist Christendom began to lay the insidious foundation of modern-day Islamophobia'.