Muslim Youth Did Not Assault And Cut off Sadhu's Hair In Madhya Pradesh, Video Viral With False Claim

The sadhu was assaulted in Khandwa, Madhya Pradesh on 22 May by a Hindu man identified as Praveen Gaur. The video of the incident is viral with a false claim that a Muslim Youth beat up a Aghori Sadhu Maharaj.

The video has been shared in the context of increasing instances of disinformation inflaming communal tensions.

The 28 seconds viral video shows a man dressed in the attire of a Sadhu being assaulted by a man. Even as the Sadhu wails in pain, the man continues to beat him and verbally abuse him. The man forcefully shears off his hair while slapping him. The caption of the viral video claims that a Muslim youth in Khandwa, Madhya Pradesh shaved off the hair and beard of an Aghori Sadhu Maharaj in front of all.

[English Translation: In Khandwa, a Muslim youth shaved off the hair and beard of an Aghori Sadhu Maharaj in front of all. This son of a pig should be caught as soon as possible. Please forward this post as much as possible, he should be punished under the strictest Hindu act"] [Trigger Warning: The Logical Indian has not embedded the video due to its graphic nature and strong language. Click here to watch the video.] 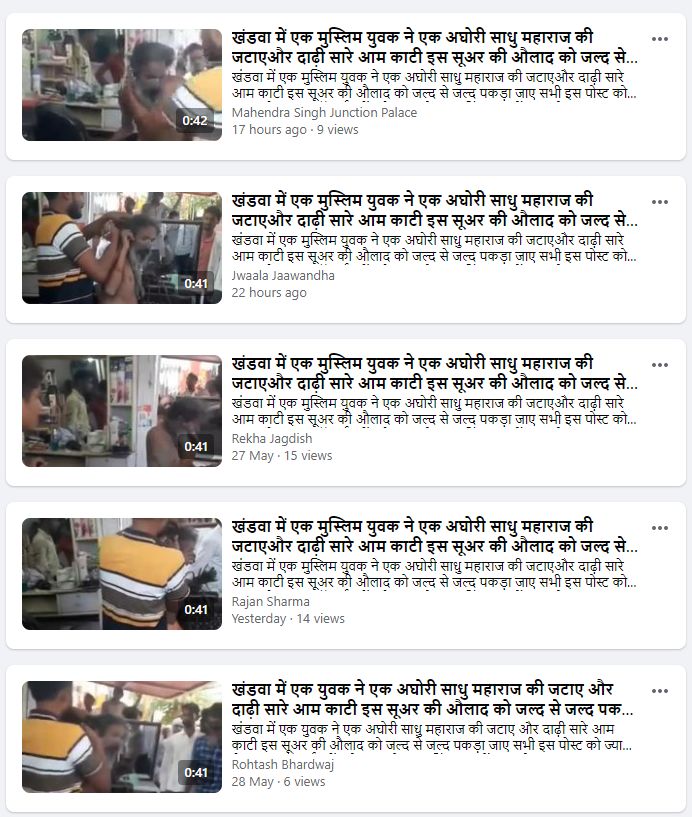 The Logical Indian fact check team verified the viral claim and found it to be false. The accused belongs to the Hindu community and no communal angle was involved in it.

We used InVid's Keyframe Analysis tool to isolate keyframes from the video. We conducted a reverse image search on one of the keyframes which led us to this video by ABP Live published on 24 May. In the thumbnail of the report, a still from the video can be seen. The report provides details about the viral video, stating that the incident took place in Khandwa, Madhya Pradesh.

As per the report, the accused is Praveen Gaur, son of Ramdas Gaur, who operates a restaurant in Khandwa. The report asserted that Gaur verbally abused the Sadhu and dragged him to a nearby barbershop and forcibly sheared off the monk's hair. We then conducted a keyword search with this relevant information and came across a report published by NDTV on May 28. As per the report, the incident took place in a tribal zone of Patajan village in Khandwa, Madhya Pradesh. The incident reportedly took place on the afternoon of 22 May in Khandwa's Haat Bazaar.

The sadhu, who used to beg for alms in the market for survival, got into an altercation with the accused. After this, Praveen Gaur assaulted the sadhu in the market in full public view. The accused was allegedly in an inebriated state. The report states that following the incident, the crowd that had gathered saved the sadhu from the clutches of the accused. However, the sadhu disappeared after the incident. The Khandwa police are looking for him in order to register a formal complaint, as per the station in charge Parasram Dabar. Hindustan Times has also published a video report on the issue, which was uploaded to YouTube on May 25. At the 1.29 mark in the video report, the statement by Vivek Singh, Superintendent of Police in Khandwa can be heard. He asserted that the accused, Praveen Gaur, has been held in police custody with regard to the matter and specifically the motive is still under investigation.

We spoke to Narayan Singh Rajput, Circle Inspector of Khandwa, and he said that they haven't been able to ascertain any exact reasoning from the case because they're still on the look-out for the Sadhu. He added that they've sent their team to multiple places like Indore to Ujjain, and once he's found, they can register a formal complaint for the case. He added, "There is no scope for a communal angle to this, since both the Sadhu and the accused are from the Hindu community."

In our investigation, we found that the sadhu was assaulted in Khandwa, Madhya Pradesh on 22 May by a Hindu man identified as Praveen Gaur. The accused operates a restaurant in Patajan village of Khandwa block in Madhya Pradesh. The sadhu reportedly got into an altercation with the accused. As per media reports and the statement by the Khandwa SP, Vivek Singh, the accused has been held in custody. The police are actively searching for the sadhu to register a formal complaint in the matter which is under investigation. There is no mention of a communal angle involved in the incident. Hence, the viral claim is false.