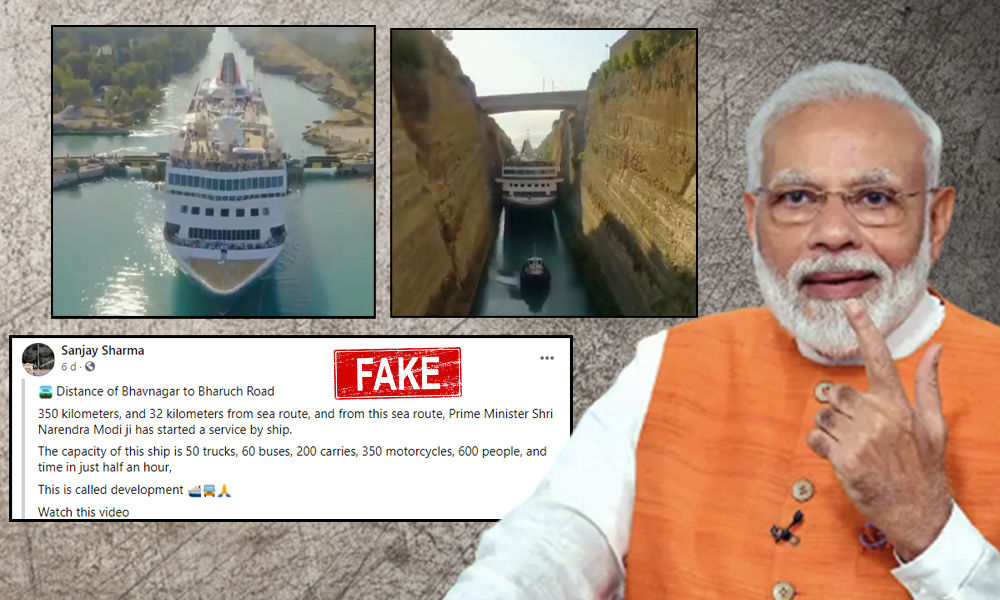 The Logical Indian Fact check team investigates the claim that Video shows the Ro-Ro ferry from Gujarat's Bhavnagar, sailing through a tiny canal.

A video clip showing a cruiser ship sailing through a tiny canal is being circulated on social media platforms with the claim that it shows the Ro-Ro ferry from Gujarat's Bhavnagar.

Viral Claims suggested that the service was launched by PM Modi to reduce the travel distance between Bhavnagar and Bharuch Road from 350 km to 32 km.

"Distance between Bhavnagar and Bharuch road is 350 km. But while traversing through sea, it is 32 km. Therefore, PM has started a cruise service on this sea route. The cruise has a huge capacity and can carry 50 trucks, 60 buses, 200 cars, 350 motorbikes and 600 people in one and go and covers the entire distance in just half an hour (Translated to English)" reads the caption of one such post.

Video shows a Ro-Ro ferry from Gujarat's Bhavnagar, sailing through a tiny canal.

The claim is misleading since the text claim of the viral post is correct, however, the cruise video is from Greece.

This led to a Times Now report which was published on October 14, 2019. The report stated that the video was from Greece. The ship seen in the viral video is "196 meters in length and weighs a whopping 23,344 tonnes, carrying 1,200 passengers." Reportedly, the cruise had started its journey from Southampton in late September of that year and on October 14, 2019, was sailing on a 25-night 'Corinth Canal & Greek Islands.'

The report also mentioned that the ship was a 22.25-meter-wide MS Braemar ship which was also the largest ever vessel to pass through the canal, which is just 24 meters wide at its narrowest point.

Below is the video carried by the article:

Further, a keyword search based on the captions of the viral post led to a report on Patrika, published on November 5, 2018, which said that the travel distance between Bharuch and Bhavnagar would be reduced from 310 km to 31 km by sea route.

Below is a screenshot of the translated report:

Times Of India reported on February 22, 2020, that the Ghogha-Dahej Ro-Ro ferry had resumed operations on February 24 after a five months gap.

Therefore, contrary to viral claims the video is actually from Greece and shows the 72 feet wide MS Braemar cruise ship.