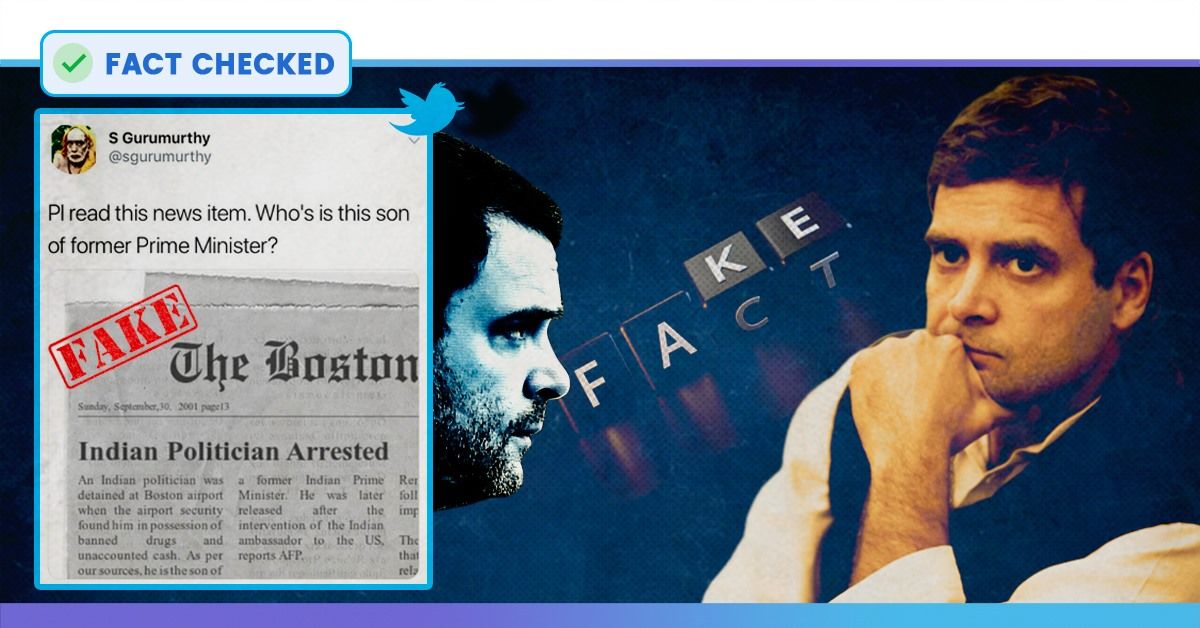 WhatsApp groups, especially of friends and families, are often filled with forwards and many times they are fake. We often don’t confront them when they forward a piece of fake information, but Karthik Srinivasan, a communications professional, did. A fake newspaper clipping that says “Indian Politician Arrested” referring to Rahul Gandhi’s arrest at the Boston airport, in 2001, was shared in Karthik’s alumni groups on WhatsApp. The newspaper clipping has been circulated on WhatsApp and social media previously as well.

What's with 'alumni Groups' on Whatsapp? They all seem uniformly delusional and completely lacking any common sense! This morning, in one of the Groups I'm part of, someone shared this well-known hoax. I replied with the first fact-check page I got on Google – on Quint. 1/7 pic.twitter.com/QvlE5CWfqN The news clipping claims that the Boston airport security “found him in possession of banned drugs and unaccounted cash. As per our sources, he is the son of a former Indian Prime Minister.”

In a video of 2013, Subramanian Swamy is seen to be claiming that Rahul Gandhi was arrested in 2001 at the Boston airport as he was carrying a bag of heroin drug and $1,60,000 cash.

The picture of a newspaper clipping was initially shared by S Gurumurthy, an RSS ideologue and a Non-Official Director of RBI, on April 16, 2019. The caption of the tweet — which was later deleted — read “Pl read this news item. Who is this son of former Prime Minister?”

The fake news clipping that has been viral for a really long time has earlier been fact-checked by The Quint & Facthunt.in. The fake newspaper clipping may have been generated using an online website fodey.com. Similar fake clipping in regard to RBI has been circulated too. One needs to fill a few details and can generate fake news using the website.

Rahul Gandhi was not arrested at the airport

On September 30, 2001, as per a source-based report by The Hindu, Rahul Gandhi was reportedly detained by the Federal Bureau of Investigation (FBI) at the Boston airport and was questioned by the authorities for about an hour. This arrest came on the aftermath of the September 2001 attacks, where several people were being subjected to several layers of security checks at the airport. The report further states that Rahul Gandhi was released only after Sonia Gandhi called the then Indian Ambassador to U.S. Lalit Mansingh and asked him to intervene.

However, Sridhar Krishnaswami, a Washington correspondent of The Hindu told The Quint that reports of Gandhi being detained “are not true” and the correspondent also confirmed with Mansingh and other officials at the embassy who said that they aren’t aware of anything like that.

The newspaper clipping is fake. It was created using an online tool to spread disinformation against former Congress President Rahul Gandhi.