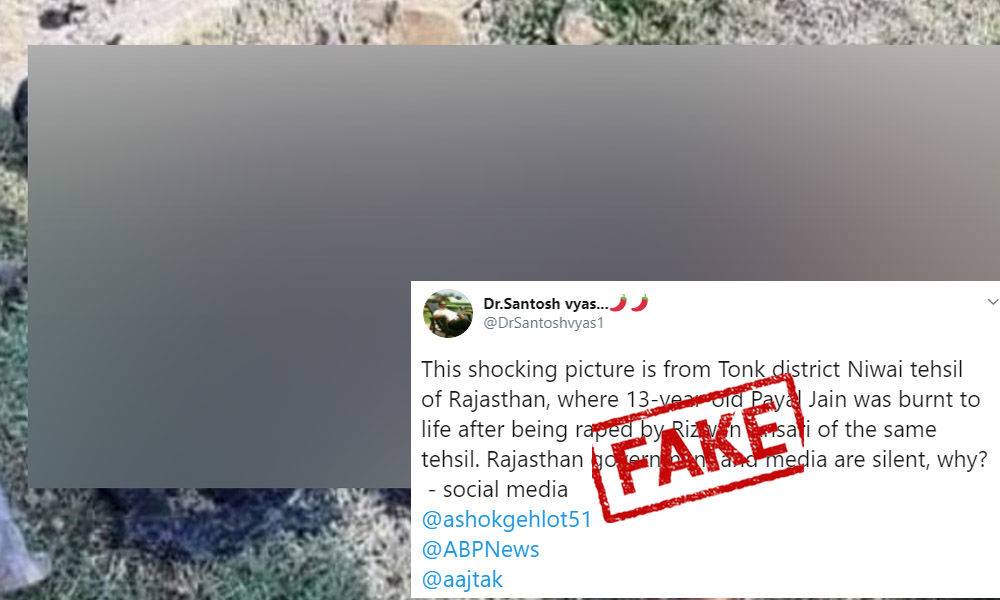 The Logical Indian Fact check team investigates the claim that a viral photo shows a woman who raped and burnt alive by a Muslim man in Rajasthan.

A photograph of a half-burnt dead woman is being circulated on social media with the claim that a "13-year-old girl was brutally raped and burnt alive." Viral posts suggested that the woman in the photo is Payal Jain from Newai, Rajasthan, and the perpetrator of the incident is a person named Rizwan Ansari.

The Logical Indian will not be linking the viral posts in this report owing to the disturbing nature of the photos.

The Logical Indian received a request to verify the claims surrounding the viral photo.

Photo shows a woman who was a victim of a communally charged crime in Rajasthan.

A Reverse image search of the photo led to a tweet by Sunil Astay, member of the Bahujan Sangharshh Dal. According to his tweet, dated October 1, the incident occurred in Madhya Pradesh.

The tweet also contained a screenshot of a report by a newspaper called Indore Samachar.

A keyword search based on this led to a report by Navbharat Times on the incident. According to the report, dated September 30, 2020, the incident happened in Gandhwani area in Dhar, Madhya Pradesh.

Dhar Superintendent of Police (SP) Aditya Pratap Singh told Zee News that the woman was murdered by her friend and his accomplice as they wanted to get rid of her. He confirmed to The Quint that there was no communal angle to the incident which had occurred on 29 September. According to him, she was murdered and then burnt, and one of the accused Sohanlal has been arrested, while Govind is still absconding.

Broadcast on the incident by 'Samay Jagat' on the same day is attached below:

Reportedly, the woman was identified as Kesharbai. Therefore, the incident occurred in Madhya Pradesh as a result of an internal dispute.