Image Of The Youth Shared By India TV, Journalist Kanchan Gupta Is Not Of A Boy Named 'Abdul Jamal Khan' 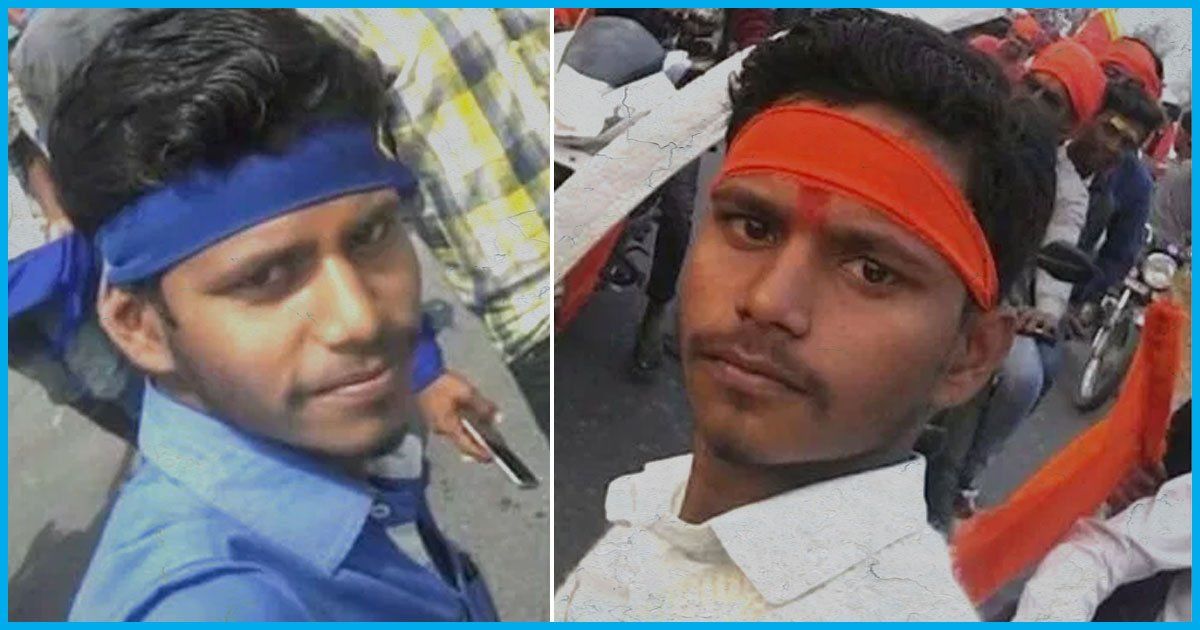 In the last few days, a photograph has gone viral on social media. It is a split image in which a young boy with a saffron bandana is shown on one side and another image with blue headgear on the other side. It is claimed that this is the same person who was earlier part of protests by Karni Sena and later on was present during the Bharat bandh protests by Dalit groups.

This photograph has been shared thousands of times across social media platforms and the boy has been called a ‘freelance protester’, willing to hit the streets for whoever is willing to pay. Now, it is being said that this boy’s name is Abdul Jamal Khan. This information was broadcasted by the Hindi news channel India TV, which has now deleted the story from the website. The cached version can be viewed here. In the clip below, it can be seen that the correspondent is confirming that the name of the young protester is Abdul Jamal Khan. This clip has been posted on the Facebook page Hindustan Meri Jaan.

Apart from India TV, this information was shared by many social media users as well. Among them was journalist Kanchan Gupta. Ironically he is a member of the Central Press Accreditation Committee. Gupta later deleted his tweet and apologised. The young boy’s alleged identity did not go unnoticed and this information was shared most prominently by right-wing social media users. Tapan Ghosh who is a Hindutva activist from West Bengal also shared this image with the words “Abdul Jamal Khan, the Mullah, present everywhere in all divisive, violent and destructive acts. They want to divide Hindu society and harm @narendramodi with the help of Congress and @rahulgandhi”.

Abdul Jamal Khan, the Mullah, present everywhere in all divisive, violent and destructive acts. They want to divide Hindu Society and harm @narendramodi with the help of Congress and @RahulGandhi pic.twitter.com/r2EXpfMjhM

Another Twitter user @NaIna0806 who is followed by Prime Minister Narendra Modi too tweeted this image, targeting Congress President Rahul Gandhi, accusing him of dividing the country for political gains.

It turns out that the source of this information that the name of the boy is Abdul Jamal Khan is a parody account on Twitter. The parody account is of Republic TV news channel. It posted the following tweet on April 2 which has been retweeted over 800 times and has since spread like wild fire over social media.

#BREAKING : I was a Rajput Hindu in Karni Sena protest against Padmavat and i am a dalit in #BharatBandh protest. I believe in casteist harmony and takes part in every violent protest. : Abdul Jamal Khan pic.twitter.com/nRMC5taShy

One of the earliest instances of these pictures on social media was from a Twitter handle called @ModuSir. This tweet was retweeted over 3500 times.

As for the claim that the two photographs are of the same individual, Alt News juxtaposed the faces to try and ascertain if they are indeed one and the same person. Using the InVidsoftware for analysis, we magnified various facial features to aid visual comparison. The magnified version of the image does show subtle differences. However, this difference is not conclusive and we are unable to ascertain whether the two pictures are of the same person or not. Although the resemblance is striking, Alt News is unable to verify if the two photographs are indeed of the same person. Notwithstanding the lack of conclusiveness over the identity of the said individual/individuals, the name ‘Abdul Jamal Khan’ is a pure figment of imagination.