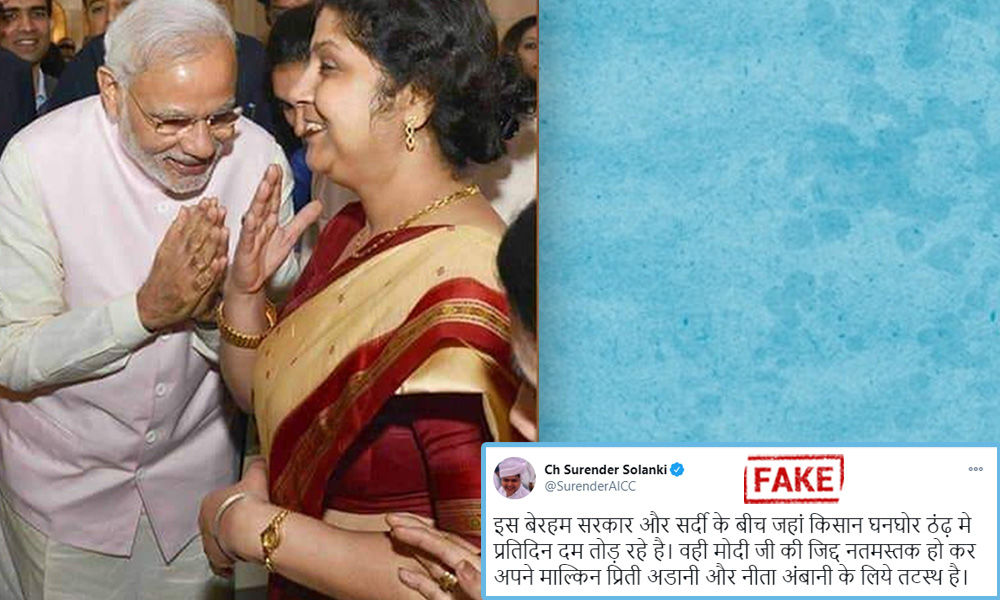 The farmers from Punjab, Haryana and Uttar Pradesh (West) are protesting in Delhi since November 26, 2020, against the three new farm laws passed by the Parliament of India in September 2020. Opposition and netizens are alleging that the farm laws were passed to support big corporate houses like Adani Group and Reliance Industries.

In the backdrop of this, an image of Prime Minister Narendra Modi bowing to a lady is going viral with a claim of her being Priti Adani, wife of Gautam Adani, Chairman of Adani Group. The image is viral with the caption, "अदानी की बीबी की चरण वंदना करते हुए भक्तों के पापा की फोटु" (Which translates in English as, "Photo of the father of Bhakts while worshipping Adani's wife").

The lady in the viral image is Priti Adani, wife of Gautam Adani.

On Google reverse image search, The Logical Indian found the same image published by Amar Ujala on April 12, 2018. In the same article, the lady can be also seen with other prominent personalities like Amitabh Bachchan, Rajnikanth, Vidya Balan and APJ Abdul Kalam. The article identified the lady as Deepika Mondol, Chief Functionary Officer of an NGO, Divya Jyoti Foundation. The NGO promotes Indian art and culture, education and literacy and tribal affairs.

We also compared the image of Deepika Mondol with Priti Adani and did not find any resemblance between the two.

The website of Divyajyoti Cultural Organisations and Social Welfare Society shows Deepika Mondol as the Chief Functionary Officer of the organisation.

Alt News spoke to Samar Mondal, husband of Deepika Mondal, who said, "I'm aware that my wife's picture with PM Modi is being circulated with a false claim. I can't recollect which year this image was clicked. However, it is probably from a DCOWS event."

Also Read: Fact Check: Photo Of PM Modi Alongside A Lady Shared Claiming Her To Be Jashodaben