In social networking sites and WhatsApp, a message is being circulated which claims that Muslim Regiment denied fighting against Pakistan in 1965 war. The truth is Muslim regiment never existed. 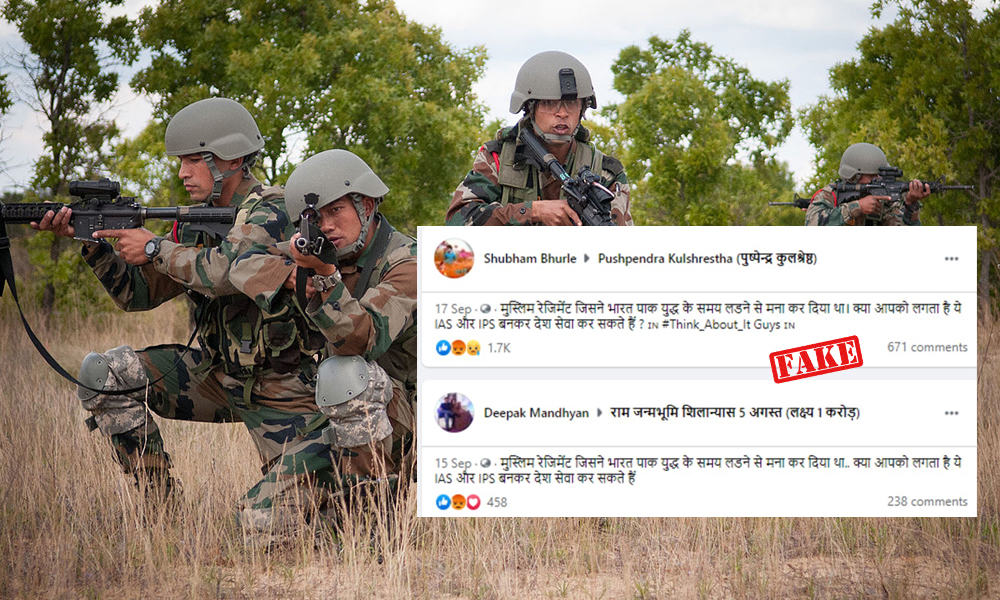 Social Media is trending with the claim that the Muslim regiment of the Indian army had refused to fight in India's 1965 war with Pakistan. They are using this claim to question the loyalty of Muslims towards the nation and also the ability of Muslims to serve the nation once they become IAS or IPS officers.

The message was shared in many right-wing social media groups.

In another Facebook group named Pushpendra Kulshrestha, the post was liked more than 1.7k times and got 819 shares.

It is not the first time that the posts claiming Muslims did not participate in 1965 war against Pakistan have gone viral. Similar posts went viral in 2017 as well.

The Muslim regiment of the Indian army had denied fighting in 1965 war against Pakistan.

The information that is being circulated is false.

Earlier, the Indian Army had caste-based division during the British era.

In the British era, the Indian army was divided based on caste, not religion. Castes like Rajput, Qureshi and Pathan etc, were considered as the Marshal castes, i.e; the fighter castes. The rest were considered non-marshal castes. Before the revolution of 1857 the British preferred marshal castes in Indian army. After the revolt of 1857, British started hiring from those castes who favoured them in suppressing the revolt. Since many soldiers from West Bengal region were involved in the revolt. Thus, irrespective of their religion very few people were hired in the Bengal army. Most of the Muslims who were being hired after the revolt of 1857 were from North-Western region, which is currently a part of Pakistan. Thus, after Independence when the army was divided between India and Pakistan, a major population of Muslim soldiers went with Pakistan, hence India had few Muslim soldiers.

Does that mean, Indian Muslims did not support India?

No, there were cases of Indian Muslims who not only fought in Post-Independence war against Pakistan but also won gallantry awards. For example, Quartermaster general Abdul Hamid was awarded Param Vir Chakra posthumously for his contribution in the 1965 war. In the same battle, Major (later Lt Gen) Mohammad Zaki and Major Abdul Rafey Khan also won Vir Chakra. According to The Times of India, Rafey Khan won the award posthumously as he battled the Pakistani division commanded by his uncle, Maj Gen Sahibzada Yaqub Khan. He wrote, "There was no Muslim Regiment ever and certainly not in 1965. But Muslims fighting as part of multi class regiments proved their absolute commitment and worth. Abdul Hamid's Param Vir Chakra, although a legend, is insufficiently recalled today."

The caste-based names of Indian army exist since the British era, but caste is not a barrier to be hired in the regiment of that particular caste; example, anyone can be hired in Jat regiment or Gorkha regiment or any other regiment. In the article written by Lieutenant General (Retd) Syed Ata Hasnain in Times Of India, he says, " A commissioned officer goes to any regiment or unit irrespective of his ethnicity or faith or that of the regiment, which shows that Muslims did not give up their battle against Pakistan."

Thus, based on the above facts, The Logical Indian concludes that there was no Muslim regiment that existed in India that gave up fight against Pakistan and the information circulating on social media is false.

Also Read: Fact Check: Video Of Rickshaw Puller Crying While Authorities Seize His Rickshaw Is Not From India