A video of a man getting beaten in presence of police has gone viral with a false claim that the man in the video is Munawar Faruqui.

A video is viral on social media in which a man is being thrashed in front of police. Many people are sharing the video with the claim that the man being beaten in the video is stand-up comedian Munawar Faruqui. The video is being shared in the context of the recent arrest of Munawar Faruqui for allegedly insulting Hindu gods and violating Covid-19 protocol at a New Year event.

People are sharing the video with different captions. A Facebook user Afzal Hussain shared the video with the caption, "Comedian Munawar Faruqui, he was abused and beaten up in the presence of Indore Police in court premise." The man getting beaten in the viral video is Munawar Faruqui.

The Logical Indian closely observed the video and found the man in the viral image is not Munawar Faruqui. 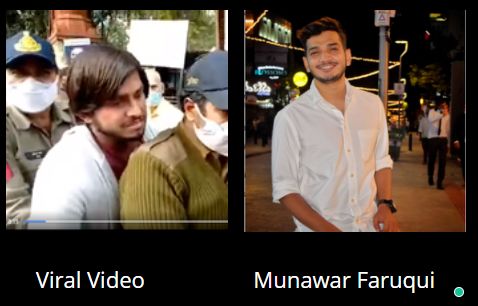 Hussain Haidry, a poet and lyricist, also tweeted the same video and identified the man as Sadakat Khan, a friend of Munawar Faruqui.

Update: This guy who is getting slapped, his name is Sadakat Khan. https://t.co/JJfOyGUmH1

He's a friend of Munawar, works as a supervisor in a construction company in Bombay. He had gone to meet him in the court for hearing as his maternal home is in Indore, MP, and has gotten arrested too. Most reports have accidentally missed this, hence updating.

The Quint contacted Asad Warsi, a member of Faruqui's lawyer's team, who confirmed that the man seen in the video is not Faruqui but his friend Sadakat Khan.

The Quint also quoted CSP-Central Kotwali BPS Parihar, who said, "Munawar Faruqui was not beaten up in the presence of police officers."