The Logical Indian Fact Check Team investigates the claim that Jaaved Jaaferi has tweeted that Hindus are being intolerant.

Recently a photo showing a tweet from what appears to be the verified Twitter account of Bollywood actor Jaaved Jaaferi has been doing the rounds on Social media.

The tweet in the viral graphic reads, "It is not necessary that all those who are putting saliva on fruits and vegetables are Coronavirus positive.

"Even then a few Hindu customers are boycotting Muslim sellers and spreading hatred. Why are you so intolerant? (Translated from Hindi)" 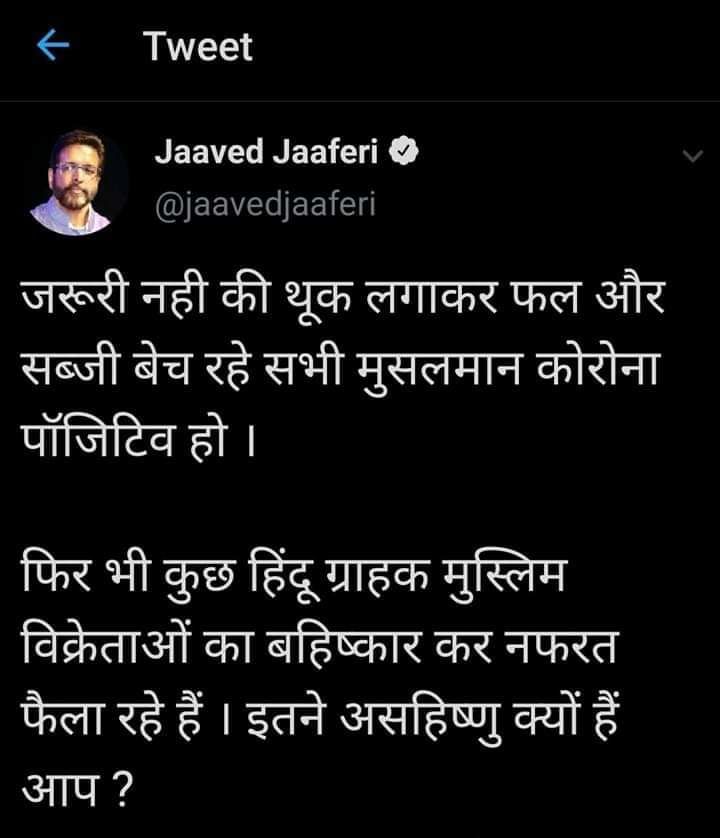 Jaaved Jaaferi has tweeted that Hindus are being intolerant by refusing to buy fruits and vegetables from Muslim vendors since not all are positive for novel coronavirus. He has also accused Hindus of spreading hatred.

The claim is absolutely false.

Speaking to The Logical Indian, Jaaved Jaaferi said, "I only post on Twitter and I haven't said this."

He further said that he has been on the receiving end of hate mails due to this fake viral graphic.

A thirty-second video of a fruit vendor licking his fingers while handling fruits on his cart was being shared on social media with the claim that Muslims are purposely spreading COVID-19 disease in the country.

The video was extensively shared on social media platforms including Twitter and Facebook and has also crept into Whatsapp groups with text saying the man in the video is spitting and putting his saliva on the fruits, thereby, infecting them.

This is next level. Be safe and careful people pic.twitter.com/OJhONjvUR3

Hindi news channel, TV9 Bharatvarsh, also picked up the video and labelled the vendor as "corona criminal" linking it to the recent incidents of the virus outbreak in the country.

The incident originally occurred in in Madhya Pradesh's Raisen district.

The man identified as Sheru was arrested on April 3, after the police authorities took cognisance of the viral video and booked him under sections 269, 270 of the Indian Penal Code.

The complainant Bodhraj Tipatta said that he had shot the video while sitting at his friend Bhavishya Kumar's pan shop when he saw this fruit vendor "infecting" the fruits with his saliva. Tipatta, in his statement also mentioned that he shot this video on February 16.

Jaaved Jaaferi has been tweeting a lot of fact checks surrounding the barrage of fake news that spiked up on social media following the Tablighi Jamaat incident. This could be a possible reason behind this fake graphic.

On March 30, it was reported that six attendees at the Tablighi Jamaat, an Islamic religious reform movement in Delhi's Nizamuddin locality, had died of COVID-19.

This incident led to fact-checking websites reporting a barrage of fake news targeting Muslims for the pandemic. Video clips shared on Facebook and WhatsApp purportedly showed Muslims actively working to spread the novel Coronavirus in India.

Ever since March 30, there was a sudden surge in fake news and Islamophobic propaganda on social media, with hashtags such as #CORONAJIHAD and #NizamuddinIdiot trending on Twitter.