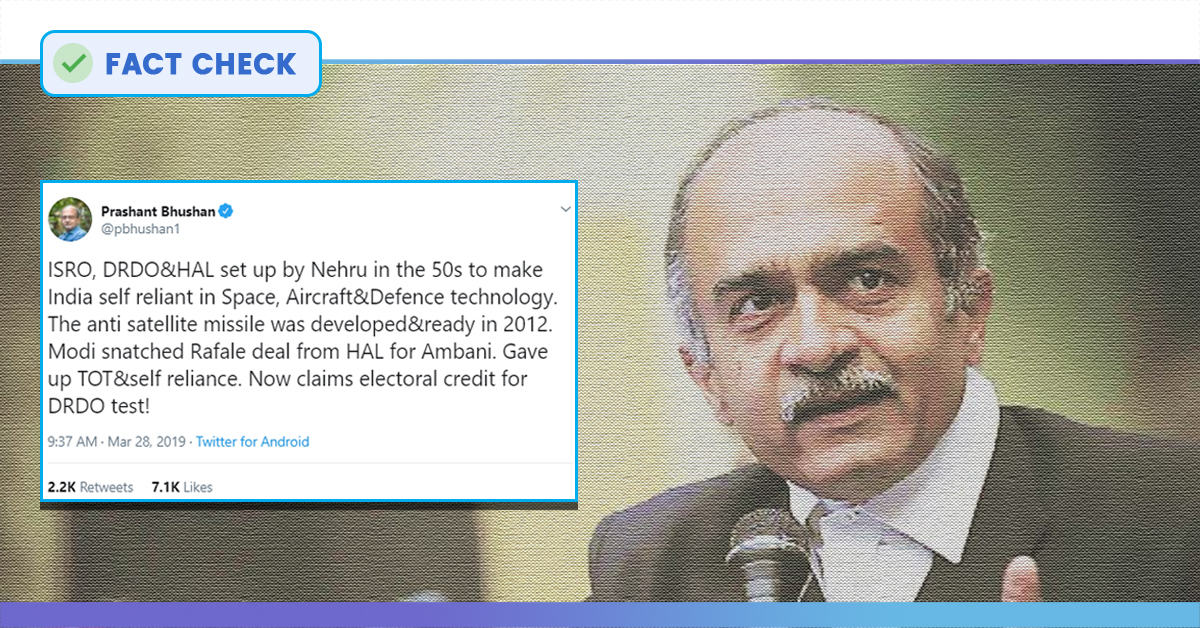 On Wednesday, March 27, our Prime Minister Narendra Modi made an important announcement. While Twitter was flooded with people’s anticipatory calls to march to the ATMs, in an anti-climatic plot twist, PM announced the success of India’s indigenously built A-SAT (anti-satellite) weapon.

With the elections closing in, this exemplary feat seemed to be achieved by the Prime Minister and the present government themselves alone. Many people took to Twitter to laud the current BJP government for a success achieved by DRDO (Defence Research and Development Organisation) and Indian Space Research Organisation (ISRO).

Others started pointing fingers at the previous government and their lack of enthusiasm in the project. Former DRDO director-general VK Saraswat in an interview claimed that he had proposed a similar experiment to the UPA government too, but they were not “interested”.

ISRO, DRDO&HAL set up by Nehru in the 50s to make India self reliant in Space, Aircraft&Defence technology. The anti satellite missile was developed&ready in 2012. Modi snatched Rafale deal from HAL for Ambani. Gave up TOT&self reliance. Now claims electoral credit for DRDO test!

This post was shared with many with their usual ex-Prime Minister bashing tendencies. Several people, along with some having ‘chowkidaar’ before their names on social media bashed Prashant Bhushan for the tweet. A simple Google search would clear all the confusion surrounding the issue. ISRO used to be previously known as Indian National Committee for Space Research (INCOSPAR) and was established in 1962 by the efforts of independent India’s first Prime Minister, Jawaharlal Nehru and scientist Vikram Sarabhai recognizing the need in space research. It grew into ISRO in 1969.

DRDO was formed in 1958 under the Ministry of Defence of the Indian government. Jawaharlal Nehru was still the Prime Minister then. While HAL was established in Bangalore on December 23, 1940, by Walchand Hirachand who became Chairman of the company.